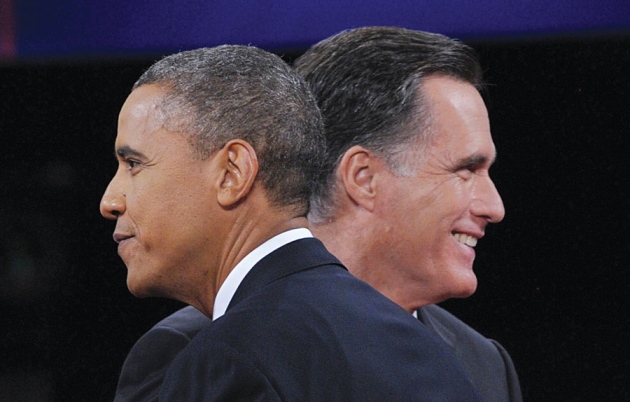 Science rarely takes the stage in US presidential campaigns. But as President Barack Obama and Republican challenger Mitt Romney make their final bids for votes on 6 November, their sharply contrasting visions of the size and proper role of government have profound implications for science.

In the face of a sluggish economy and competition from countries such as China, “we’ve got to make sure that we’ve got the best science and research in the world”, Obama said during his second debate with Romney, on 16 October. Romney, previously a business executive and the former governor of Massachusetts, responded with a refrain that has become a centrepiece of his campaign: “Government does not create jobs.” The exchange captures differences that could directly affect a wide range of science-related matters for years to come, including research funding, energy development, environmental regulation and public health (see ‘In their own words’).

In their own words

Obama: “Climate change is one of the biggest issues … we have to meet this challenge by driving smart policies that lead to greater growth in clean energy generation and result in a range of economic and social benefits.”
Romney: “I oppose steps like a carbon tax or a cap-and-trade system … Economic growth and technological innovation, not economy-suppressing regulation, is the key to environmental protection.”

Obama: “Now I want to hire another hundred thousand new math and science teachers and create two million more slots in our community colleges so that people can get trained for the jobs that are out there right now.”
Romney: “I propose we grade our schools so parents … can take their child to a school that’s being more successful. I don’t want to cut our commitment to education, I want to make it more effective and efficient.”

Obama: “I have supported an all-of-the-above energy approach that will allow us to take control of our energy future, one where we safely and responsibly develop America’s many energy resources.”
Romney: “A crucial component of my plan … is to dramatically increase domestic energy production and partner closely with Canada and Mexico to achieve North American energy independence by 2020.”

The bottom line: Romney and Obama have tussled over who supports fossil fuels the most. The difference is that Obama continues to push to develop renewable sources for the long term.

Obama: “I am committed to doubling funding for key research agencies to support scientists and entrepreneurs, so that we can preserve America’s place as the world leader in innovation.”
Romney: “The promotion of innovation will begin on Day One, with efforts to simplify the corporate tax code, reform job retraining programmes, reduce regulatory burdens, and protect American intellectual property.”

Obama: “Smart rules can save lives and keep us safe, but there are some regulations that don’t make sense and cost too much.”
Romney: “We must reduce the power of unaccountable regulators by requiring that all major regulations receive congressional approval and by imposing a regulatory cap that prevents the addition of new regulatory costs.”

Obama: “Our goal is the capacity for people to work and learn and operate and live safely beyond the Earth for extended periods of time, ultimately in ways that are more sustainable and even indefinite.”
Romney: “America has enjoyed a half-century of leadership in space, but now that leadership is eroding … I will bring together all the stakeholders … and define the pathway forward.”

The bottom line: Under Obama, NASA has drifted into budgetary and mission limbo. Romney has underscored the problem but offers few specifics about what he would change.

Obama: “We will vigorously support scientists who pursue this research. And we will aim for America to lead the world in the discoveries it one day may yield.”
Romney: “I have a deep concern about curing disease … but I will not create new embryos through cloning or through embryo farming, because that would be creating life for the purpose of destroying it.”

The bottom line: Obama repealed limits on federal funding of stem-cell research. Romney has not specified his stance, but his religious views may stand in opposition to current policy.

In his campaign rhetoric and in the policy decisions made during his first term as president (see Nature 487, 414–415; 2012), Obama has kept science near the centre of his economic plan for the United States. He has defended investment in education and in basic and applied research as essential — especially during times of austerity. By contrast, Romney has emphasized the need to scale back government and rein in the trillion-dollar deficits that have marked Obama’s first term. Romney’s campaign affirms the federal government’s importance in funding basic research, but asserts that commercial innovation belongs squarely in the private sector.

“These are really important signals,” says David Victor, a public-policy expert at the University of California, San Diego. “It certainly does not appear that a Romney administration is going to put spending on research and development and education at the centre of their priorities, whereas Obama has made science and education an important part of his agenda.”

For research advocates, Obama’s stance puts him at a clear advantage. Despite generally tight budgets across federal granting agencies in recent years, “Obama has a strong track record” of investing in science, says Abby Benson, president of the Science Coalition, a non-profit organization based in Washington DC that represents 50 US research universities. “Romney has talked about it, but we don’t know how that will translate into policy.”

On other issues, both candidates have shifted with the times. As governor of Massachusetts, Romney ushered in a ‘climate protection plan’ in 2004 that sought to reduce greenhouse-gas emissions while fostering a transition to cleaner energy sources. But one year later, he baulked at joining the Regional Greenhouse Gas Initiative, a cap-and-trade system covering carbon emissions from utilities in the northeastern part of the United States. This year, on the campaign trail, Romney has frequently pointed out that ‘global warming’ is not ‘America warming’, meaning that the United States should not take action — and increase costs on US manufacturers and businesses — while carbon emissions are accelerating in China and India. Romney has said that he would work to reverse greenhouse-gas regulations instituted by the US Environmental Protection Agency under Obama.

For his part, after watching climate legislation wither in Congress in 2010, Obama has focused on increasing fossil-fuel energy production as well as boosting renewables. Much to the dismay of environmentalists, the Obama administration has supported shale-gas development and opened up new territory in the Arctic to drilling. Oil and natural-gas output are on the rise in the United States, which has translated into less reliance on foreign oil and a reduction in greenhouse-gas emissions as electric utilities switch from coal to natural gas.

Roger Pielke Jr, an environmental-policy expert at the University of Colorado, Boulder, says that Obama has been pushed so far towards the right by political realities in Washington that the core of his energy policy looks a lot like Romney’s. “There are plenty of people who like Obama because of what he believes,” Pielke says, “but if you are a policy pragmatist, what really matters is not what people feel in their heart, but what their actual policies are.”

Nonetheless, Romney has vowed to make clear turns away from current energy policy. He has said that he would reverse a century of public policy and turn the management of federal lands over to individual states to hasten energy production. He has also repeatedly questioned the wisdom of subsidies for renewable energy production. In particular, Romney has made it clear that he would end the kind of public–private ventures that resulted in government loans to the California solar energy firm Solyndra, which filed for bankruptcy last year despite US$535 million in federal loan guarantees.

Obama and Romney both say that they would bolster the scientific workforce through easier immigration policies for foreign-born graduates of university science and mathematics programmes. Yet Mary Woolley, president of the advocacy group Research!America, based in Alexandria, Virginia, frets that neither campaign has been specific enough about its commitment to biomedical research. “I think that’s concerning,” she says. “Experience shows that candidates who don’t talk about an issue before they are elected are unlikely to be champions of that issue after they are in office.”

Although Obama has a proven track record of support for biomedicine — he allocated $10.4 billion in economic stimulus funds to the National Institutes of Health (NIH) in 2009 — he has flatlined the agency’s funding in his latest budget request. Romney’s pledge to tighten government purse strings while boosting defence spending could force cuts to the NIH and to regulatory agencies such as the Food and Drug Administration, says Woolley.

Supporters of research that uses human embryonic stem (ES) cells are particularly nervous about what actions Romney might take if he becomes president. Under Obama’s executive order of March 2009, which overturned restrictions imposed by the preceding George W. Bush administration, the number of human ES cell lines available to federally funded researchers has soared from around 20 to 182. Some fear that those gains may be frozen or even lost with Romney in the White House. 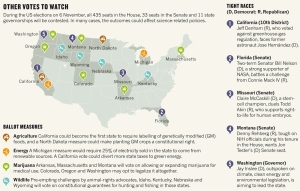 Romney’s statements about stem cells during the 2012 campaign have been vague enough to leave his policy intentions unclear, and the Romney campaign did not respond to Nature’s requests for clarification on the issue. But in 2011, Romney’s running mate, Paul Ryan, co-sponsored a bill that would guarantee every fertilized embryo the right to life. That, combined with policy statements from the Republican platform and the tone of Romney’s recent comments about abortion, “does not give us much reason to think he would support stem-cell research as president”, says Sean Tipton, vice-president of communications for the Coalition for the Advancement of Medical Research in Washington DC, an umbrella group that supports government funding of research on human ES cells.

Whoever wins the election on 6 November will inherit both a sputtering economic recovery and severe spending constraints. A combative and nearly evenly divided Congress could hamper new policy initiatives regardless of who is president, which means that tight races for the House and Senate will have significance beyond their local districts (see ‘Other votes to watch’). For US researchers, then, the future will depend not only on who wins the vote, but also on who can carry the momentum of an election victory into cooperative action across the political spectrum.