The fallout from a high-energy cosmic ray can cover many square kilometres (artist's impression).

The Pierre Auger Observatory in Argentina finally has solid evidence that the most energetic particles in nature come from sources outside the Milky Way. Scientists have suspected this for decades, but weren’t able to confirm it — until now.

“For the first time, we have proof that the highest-energy cosmic rays are of extragalactic origin,” says Alan Watson, a UK astronomer and co-founder of the observatory. The result comes as a relief to the researchers, after previous claims regarding their origin made ten years ago by the Pierre Auger Collaboration subsequently turned out to be premature.

The international team analysed 12 years’ worth of data, and found that particles in the upper range of energies were more likely to come from a region of the sky outside the Milky Way’s disk. That asymmetry is roughly consistent with the distribution of neighbouring galaxies, the researchers report in the 22 September issue of Science1.

The study does not pinpoint individual sources of the cosmic rays, or explain how they reach their highest energies. But the researchers hope that it is a first step towards understanding their origins.

Most cosmic rays are protons or other charged particles, including atomic nuclei as heavy as iron. When such a particle rains onto Earth's upper atmosphere and collides with an atomic nucleus in the air, it produces a shrapnel burst of subatomic particles. These hit other nuclei and produce more particles, generating an invisible ‘shower’ that is often spread over many square kilometres by the time it hits the ground.

To detect these showers, the Pierre Auger Observatory has 1,600 car-sized water tanks placed at 1.5 kilometre intervals, to cover 3,000 square kilometres of grassy plains in Argentina’s Mendoza province. Four sets of telescopes monitor the sky over the array, and — on moonless nights — can detect flashes of ultraviolet light generated by the showers. From its location relatively close to the equator, the array can pick up cosmic rays coming from the entire southern sky as well as from much of the northern sky, covering 85% of the celestial sphere. 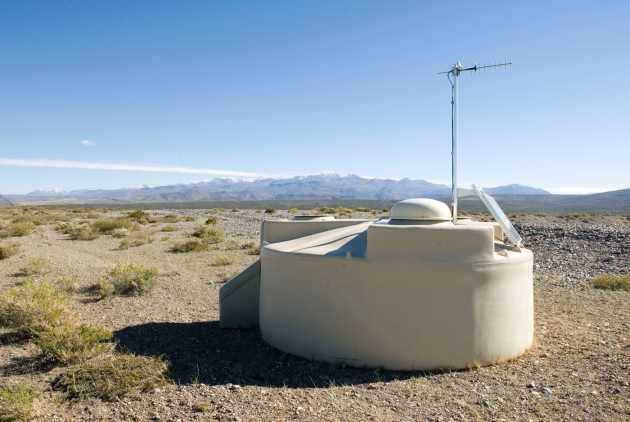 The observatory needs to be that big in order to catch enough of the most sought-after particles. Cosmic rays have been detected with energies beyond 1020 electronvolts (eV); by comparison, the Large Hadron Collider near Geneva, Switzerland, the world's most powerful particle accelerator, pushes protons to just 7 × 1012 eV. However, cosmic rays become increasingly rare the higher their energies. A particle in the 1020 eV range, on average, hits a square kilometre of Earth only once per century.

The researchers looked at 32,187 particles that had energies above 8 × 1018 eV, detected by the observatory from its beginning in 2004 until 2016. The Galaxy's magnetic field bends the paths of charged particles, which can randomize their direction by the time they hit Earth. But these particles were still 6% more likely than average to come from a particular region of the sky, which is outside the Milky Way’s disk.

Most researchers expected a skew, but not such a strong one, says Piera Ghia, an astroparticle physicist at the CNRS Institute of Nuclear Physics in Orsay, France, who helped to coordinate the data analysis. Astrophysicist Francis Halzen of the University of Wisconsin–Madison agrees. “It’s really very big. To me, it was a surprise,” says Halzen, who is spokesperson for IceCube, a major neutrino observatory at the South Pole.

When magnetic deflection is taken into account, the asymmetry seen by the Pierre Auger Observatory is consistent with the distribution of galaxies lying within 90 megaparsecs (around 300 million light years) or so from the Milky Way, says Silvia Mollerach, an Auger astrophysicist at the Balseiro Institute in San Carlos de Bariloche, Argentina.

The results strongly disfavour the supermassive black hole at the centre of the Milky Way as a major source of the higher-energy particles. “The most likely sources continue to be the usual suspects,” Mollerach says: astrophysical phenomena that generate extremely intense magnetic fields, inside which charged particles can pinball around and gain energy. These include active galactic nuclei — supermassive black holes spewing jets of matter at near-light speed — and the stellar explosions called γ-ray bursts.

The latest claim is quite conservative compared to one that the collaboration made in 2007. Back then, it found a correlation between 27 extremely high-energy cosmic rays (above 57 × 1018 eV) it had seen up until that point and a set of known active galactic nuclei2. The paper caused a sensation, but the statistical significance of the result was weak and soon melted away as the array collected more data. “In retrospect, it was a mistake that we published too early,” says Auger spokesperson Karl-Heinz Kampert, a physicist at the University of Wuppertal in Germany.

This time, the team took no chances: it accumulated much more data and is confident that the results are solid, Kampert says. Halzen agrees. “I don't think there is any doubt about the statistical significance” of the latest results, he says.

Now that the researchers have more data, they will again try to find correlations with potential sources. The results of that study should appear within a few months. The collaboration also plans to join forces with a smaller observatory in Utah, the Telescope Array, to try to map the origins of cosmic rays across the entire sky.

The Pierre Auger Observatory is also in the initial stages of a US$12-million upgrade that should enable it to better measure the relative abundance of protons and heavier nuclei in the flux of cosmic rays.