Has a cheap and effective treatment for chronic pain been lying under clinicians' noses for decades? Researchers have found that a very high dose of an opiate drug that uses the same painkilling pathways as morphine can reset the nerve signals associated with continuous pain — at least in rats.

If confirmed in humans, the procedure could reduce or eliminate the months or years that millions of patients spend on pain-managing prescription drugs. The results of the study are described today in Science1. 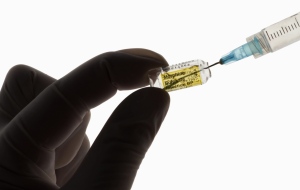 Higher than normal doses of opiates may be able to cure chronic pain.

“We have discovered a new effect of opiates when they are given, not constantly at a low dose, but at a very high dose,” says Jürgen Sandkühler, a neurophysiologist at the Center for Brain Research of the Medical University of Vienna, and a co-author of the paper.

Chronic pain is a nerve condition that lingers long after the immediate, or acute, pain-causing stimulus has receded. It can follow surgery or injury, and is also associated with conditions such as rheumatoid arthritis and cancer.

Sandkühler says that the original stimulus changes how the central nervous system deals with pain over time. In a model known as long-term potentiation, nerves carrying pain signals fire repeatedly, turning on a cellular pain amplifier that causes anything from exaggerated pain to outright agony on a long-term basis.

Opiates such as morphine and heroin remain the 'gold standard' in pain relief, but they work only temporarily for those with chronic pain. Sandkühler and his colleagues decided to push the boundaries of the opiates' action and measure whether the drugs could have any effect on the underlying problem.

After the pain stimulus ceased, the researchers gave the rats a very high intravenous dose of the opiate remifentanil. As expected, the pain signals slumped at once — remifentanil is an extremely fast-acting painkiller, and was chosen because its effects tend to wear off in rats after just 10 minutes.

When the drug's effects did wear off, the chronic pain was significantly reduced in the rats treated with low-frequency stimulation. A second infusion of the drug an hour later abolished the long-term potentiation and restored these rats' pain levels to normal. A high dose of remifentanil was also effective in reducing the pain of the rats treated with capsaicin or high-frequency stimulation.

Treating the rats with half the dose of remifentanil did not produce the same effect. Sandkühler suggests that a threshold level of the drug is needed to disrupt the movement of calcium signalling ions between nerves and neutralize the long-term potentiation.

“The dose of drugs we use is very high, probably 2–4 times higher than used for normal pain control,” says Sandkühler. “The animals almost stop breathing, which is probably one reason why this was not discovered before.”

But he adds that the equivalent amount of the opiate for a human is well below a fatal dose. He and his colleagues have conducted pre-clinical experiments that have shown that people can tolerate it.

Michael Serpell, a consultant anaesthetist and pain doctor at the University of Glasgow School of Medicine, UK, is impressed with the paper's methodology. He says the idea has always been that if you hit acute pain hard enough, then you can reduce the chance of it becoming chronic. “It would be appropriate to try this. It could be rolled out into the clinical arena in high-risk patients first,” he says.

However, Serpell cautions that a similar approach, applying a pre-emptive analgesic before surgery that was likely to cause chronic pain, produced promising results in animal studies but later trials in humans were “a complete failure”.

Treatments are certainly needed for chronic pain, which may affect up to one in six adults across the world; Serpell says that 3–5% of the adult population in the United Kingdom is prevented from working by pain. The condition is the second most common reason for claiming incapacity benefit.