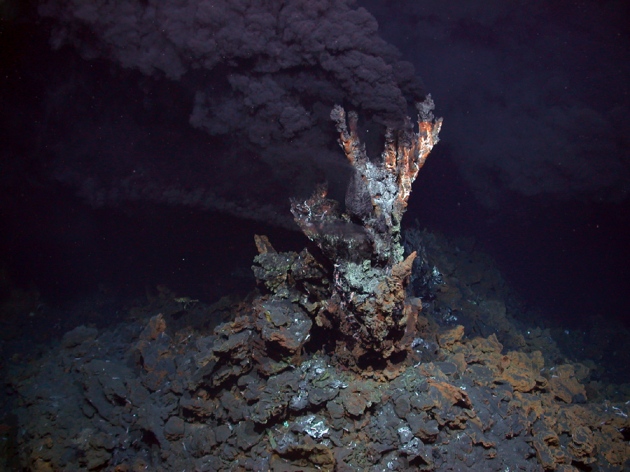 Marine communities living near mining targets such as hydrothermal vent fields might be at risk.

As commercial plans to exploit mineral resources on deep-ocean beds gather pace, marine researchers are increasingly concerned about the damage such projects might cause to the sensitive and little-understood ecosystems that thrive there. Now, scientists are taking to the sea as part of a three-year, €12-million (US$16-million) project designed to address these concerns and to develop a set of guidelines for industry.

The latest research expedition of the Managing Impacts of Deep-sea Resource Exploitation (MIDAS) programme returned to France earlier this month after exploring the Lucky Strike region of the Mid-Atlantic Ridge near the Azores islands. There, a research team began investigating whether plumes of particles that might arise from future mining operations near hot hydrothermal vents — often rich sources of metals — could affect the creatures that live there, such as deep-sea mussels.

“The goal of our experiment is to test the effects of sulphide particle deposits on the structure — composition, density, biomass, diversity — of the dominant hydrothermal fauna of the Lucky Strike vent field,” says Jozée Sarrazin, a deep-sea ecologist at the French Research Institute for Exploitation of the Sea (IFREMER) in Plouzané, France, who is leading the expedition. “It should help us to propose management strategies to help protect the unique fauna associated with high-temperature emissions on the sea floor.”

Resources such as polymetallic sulphides exist in large quantities around deep-sea hydrothermal vents. The idea of mining them was first mooted in the 1960s, but only now, with land sources declining and demand rising, is it being seriously explored.

Although no mining projects are yet under way, Nautilus Minerals of Toronto, Canada, has received a green light from the government of Papua New Guinea to mine about 50 kilometres offshore in the Bismarck Sea, at a depth of 1.6 kilometres. Other concessions have been awarded in the eastern Pacific Ocean. Nautilus would use sea-floor trawlers to cut or scoop up the deposits, which are then pumped up to a support ship.

The effects of such mining are cause for concern. The operations may “severely damage” the sensitive biological communities that live near under-sea mountains, hydrothermal vents and mineral-rich nodules on the sea floor, says David Santillo, a marine biologist and senior scientist at Greenpeace Research Laboratories at the University of Exeter, UK. As well as the physical destruction of habitats, he adds, this type of mining could smother deep-sea species with suspended plumes of sediment. Species could also be disturbed by noise, light pollution and exposure to toxic metals and other chemicals released by the mining.

The severity of such effects depends on several factors, including the nature of the exploited resource and the method of extraction, says oceanographer Cindy Van Dover, director of the Duke University Marine Laboratory in Beaufort, North Carolina. But her biggest concern is the general lack of knowledge about sea-floor processes and the cumulative effects of multiple mining events. “If we get the environmental management wrong, we are unlikely to be able to fix our mistake,” she says.

The MIDAS project, which began in November, is receiving €9 million from the European Union, and includes representatives from industry and non-governmental organizations. “We will try to identify the best ways to monitor before, during and after mining to determine the total impact and recovery of the ecosystems,” says Philip Weaver, managing director of Seascape Consultants in Romsey, UK, which is coordinating MIDAS.

Cruises to conduct experiments and sampling at depth form a core part of the project’s work. The IFREMER cruise, on the research vessel Pourquoi Pas?, was the first stage of a two-year experiment to test the effects of sulphide plumes. The research team weighed mussels found around hydrothermal vents at a depth of 1.7 kilometres and assessed their general health. Next year, they will return and mimic the effects of particle plumes on the mussels, monitoring their reactions — for instance, death, migration or increased numbers — with temperature sensors and cameras. The results of the tests will then be studied on shore.

A second MIDAS study is currently simulating potential effects on marine life in the shallow waters of Portman Bay off the coast of southeastern Spain. An onshore mining facility dumped waste into the waters there for three decades, and the researchers want to assess how the waste affected the underwater fauna. “We want to see how metal-loaded plumes behave — how far they spread, how long it takes for them to settle and so on,” says marine geoscientist Miquel Canals Artigas of the University of Barcelona in Spain, who is leading the expedition.

MIDAS will submit its report to the European Commission in November 2016.

This article originally gave an incorrect list of the resources found around deep-sea vents. It has now been corrected.