Opponents of the Thirty Meter Telescope gathered in Honolulu on 4 August.

Until now, the biggest controversy involving the International Astronomical Union (IAU) may have been its 2006 vote to demote Pluto to a dwarf planet. But on 4 August, the ongoing fight over a telescope planned for a sacred Hawaiian mountain spilled over to the IAU general assembly in Honolulu.

Demonstrators carrying Hawaiian flags — some upside-down, as a sign of distress — held a press conference outside the Honolulu convention centre to make their case against the Thirty Meter Telescope (TMT), which is set to be built on Mauna Kea. “TMT: no more desecration” read one sign. “We don't want your big toy telescopes on our sacred mountain” read another.

“We're not against astronomy,” said Kau'i Onekea, a resident of Oahu island who was wearing the popular red-and-yellow Ku Kiai Mauna (‘guardians of the mountain’) T-shirt. “We're just trying to share our beliefs.”

Mauna Kea's 4,200-metre summit currently hosts 13 astronomical observatories on state land leased by the University of Hawaii (see ‘Starry summit’). The US$1.5-billion TMT would be the largest of them all, and some Native Hawaiians say that it violates the environment and spirit of the mountain.

“Astronomy is cool but it's not necessary,” said Lanakila Mangauil, a leader of the demonstrators who grew up near Mauna Kea. “Our planet down here is dying.”

The IAU does not have a formal framework for addressing the controversy, but astronomers and demonstrators may convene an informal panel next week to discuss their concerns, said Günther Hasinger, director of the Institute for Astronomy at the University of Hawaii at Manoa. “We've been speaking with [the protesters] and having very constructive conversations,” he said.

The protests cap a week of simmering tension over the future of Mauna Kea. Seven people were arrested early on 31 July at their tent site part way up the mountain, charged with violating emergency rules that temporarily ban camping on Mauna Kea. The same night, at least 20 others were arrested on the neighbouring island of Maui, as they blocked the paths of construction trucks working on the 4.2-metre Daniel K. Inouye Solar Telescope.

The demonstrators are a diverse group but are generally led by men and women in their twenties who were educated in modern Hawaiian-language immersion schools. Decades ago, children were beaten for speaking the language; today it is a source of cultural pride and a touchstone for Hawaii's burgeoning sovereignty movement.

Not all Native Hawaiians oppose the TMT, however. “It's important to uphold your cultures and traditions, but I also think it's important to pick your battles,” says Alexis Acohido, who is part Native Hawaiian and recently graduated from the University of Hawaii with a degree in mathematics. “I really think a lot of the anger is misplaced.”

Astronomy has been a part of Hawaiian heritage since Polynesian sailors reached the islands more than 1,000 years ago, navigating by the stars. 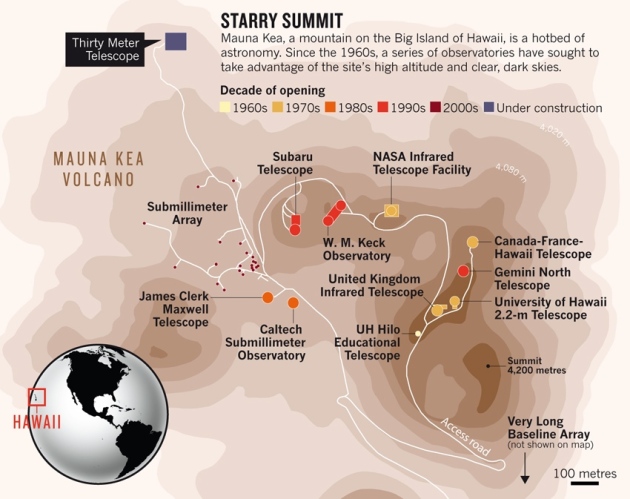 The TMT protests began at a ground-breaking ceremony last October and escalated in April when construction was scheduled to begin. The controversy now has many questioning the fate of astronomy in Hawaii, one of the world's premiere locations for observing the night sky. TMT officials went through a seven-year permitting process, and Hawaii’s governor says that the project has the right to proceed.

But construction is on hold indefinitely as university officials, politicians and protesters hold more meetings — not all with one another — about how to go ahead. “It is a very important moment for the future of Hawaii in astronomy,” says Piero Benvenuti, general-secretary-elect of the IAU.

Astronomers have been able to continue observing at other facilities on Mauna Kea, except on the night of 24 June when demonstrators blocked an access road to prevent the TMT project from restarting construction.

“We all know how precious being on Mauna Kea is,” says Hilton Lewis, director of the W. M. Keck Observatory in Waimea, Hawaii, which operates two 10-metre telescopes — the biggest on Mauna Kea.