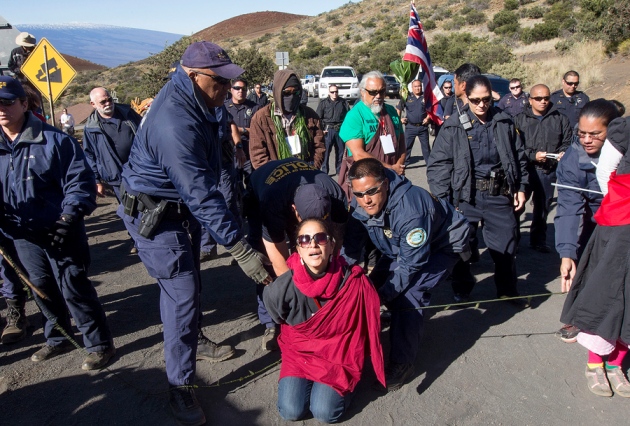 Protests against the Thirty Meter Telescope increased in early April, as construction was set to begin on Mauna Kea in Hawaii.

The battle over the Thirty Meter Telescope (TMT) escalated on 21 April, as hundreds of protestors took to the streets of Honolulu to demonstrate against the planned observatory. Construction of the TMT is on hold as astronomers and Native Hawaiians continue the decades-long discussion about whether it and other astronomical facilities belong on the sacred mountain of Mauna Kea.

The TMT project has cleared a seven-year process of legal and environmental review that has given it permission to build near the top of the 4,200-metre mountain. But protests have grown — first at a ground-breaking ceremony in October, and then again when construction was to have begun in early April.

Hawaii’s governor, David Ige declared a temporary construction moratorium on 7 April, and has since extended it several times. At the visitor centre part-way up Mauna Kea, demonstrators have camped out peacefully with signs and flags. Staff and visitors can travel back and forth to the top, but construction equipment sits idle.

It remains unclear who or what might break the stalemate. Ige said on 17 April that "the TMT team is legally entitled to use its discretion to proceed with construction". Both sides are likely to appear in support of their causes at a 23 April meeting of the Office of Hawaiian Affairs, a state agency in charge of improving conditions for Native Hawaiians.

Sandra Dawson, Hawaii community affairs manager for the TMT, says that every day, the project is assessing whether conversations are moving forward. “We are really looking for the atmosphere to get better,” she says. At the moment there is no date planned for construction to resume. In the meantime, she adds, TMT partners are continuing work on mirrors, instruments and other parts of the telescope that do not require access to the observatory site.

Mauna Kea got its start in astronomy after a tsunami in 1960 flattened the city of Hilo on the Big Island. The head of the local chamber of commerce began a drive to attract astronomers to help to rebuild the local economy. Today there are 13 telescopes on Mauna Kea. One of them, the Caltech Submillimeter Observatory, is slated to be taken down starting next year, and the site will be returned to its natural state.

The TMT, which has a primary mirror made of 492 segments, would be by far the largest telescope on the mountain. The US$1.5-billion project is run by an international consortium involving two California institutions — the University of California and the California Institute of Technology in Pasadena — along with the governments of China, Japan, India and Canada, with support from the Gordon and Betty Moore Foundation, a philanthropic organization based in Palo Alto, California.

In 2009, project managers chose Mauna Kea as the location over a site in Chile, citing better observing conditions in Hawaii. Two competing telescopes — the European Extremely Large Telescope and the Giant Magellan Telescope — are slated to be built in Chile.

To Native Hawaiians, Mauna Kea represents the place where the earth mother and the sky father met, giving birth to the Hawaiian Islands, says Dane Maxwell, a cultural-resource specialist on the island of Maui. Maxwell works as a cultural monitor for another big telescope project, the 4-metre Daniel K. Inouye Solar Telescope that is under construction on Haleakala Mountain in Maui. That telescope has faced fewer protests than the TMT, although legal challenges are still wending their way through the Hawaiian supreme court.

TMT organizers chose the building site to reduce the telescope's visual and cultural impact. They have set up various outreach programmes such as a scholarship fund to train future scientists and engineers from Hawaii. Yet the telescope plans seem to have run up against renewed Hawaiian cultural pride.

Some of the current protestors had fought against earlier development on Mauna Kea, such as a plan to add ‘outrigger’ telescopes to the existing twin domes of the W. M. Keck Observatory. That proposal ultimately failed in 2006, after NASA pulled its funding. But other protestors are new faces. Many come from immersion schools that teach in the Hawaiian language, which was once almost extinct but is now a source of cultural identity.

Social media has a large role; popular Twitter hashtags include #WeAreMaunaKea and #AoleTMT (“No TMT”). Many of the demonstrators are too young to have been involved when the TMT permitting process began. “It’s a new generation,” says Maxwell.

The Mauna Kea debate reflects larger issues of Hawaiian history, including past abuses such as using one of the islands as a practice bombing range, says Robert McLaren, associate director of the Institute for Astronomy at the University of Hawaii at Manoa. “There’s more to this than just a telescope on Mauna Kea,” he says.

Maxwell emphasizes that many of the protestors are not anti-science. “It’s just that enough is enough,” he says. “The land is an extension of you, so any destruction is hard inside.”

The TMT’s board will meet next week in Pasadena. The project scored a major, long-awaited funding commitment from the Canadian government on 6 April. Now the fresh challenge of Hawaiian protests awaits.

“I’m cautiously optimistic that we can find some accommodation that will make this project go forward,” says McLaren.