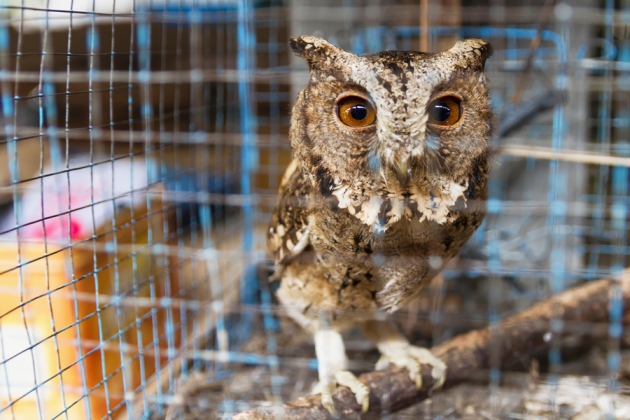 Wild-caught owls are increasingly being sold in Indonesia’s bird markets.

The number of owls traded illegally on Indonesian markets has risen sharply in the past two decades — and researchers think the popularity of the Harry Potter books and films may be fuelling the trend.

Anecdotal evidence from countries including India have previously suggested that demand for pet owls spiked with the popularity of Harry Potter, but a study of Indonesia’s bird markets — which are known for selling a variety of wild-caught birds as pets — puts numbers on the trend.

Wildlife researchers surveyed 20 bird markets on the islands of Bali and Java and say that the number of owls being sold has risen dramatically: from perhaps a few hundred a year before 2001 to 13,000 by 2016.

Owls also now make up a greater proportion of the birds on offer in the markets, researchers say. Before 2001 they accounted for less than 0.1% of birds being sold; last year, the share had risen to around 1.5% on some markets. The work is published in Global Ecology and Conservation1.

Study co-author Vincent Nijman, a wildlife-trade researcher at Oxford Brookes University, UK, says he is pretty sure there is a link between the rising owl sales and the popularity of the Harry Potter books and films, in which the titular character keeps a pet owl named Hedwig. The first novel was translated into Indonesian in 2000, and the first film adaptation was released in 2001.

Biodiversity: The ravages of guns, nets and bulldozers

Nijman adds that there are online forums where fans clamouring for pet owls share tips on where to obtain the birds. The increase in Internet access in Indonesia — one-fifth of the population is now online compared with just 2% in 2001 — made it easier for people to source the birds and is also likely to have contributed to the rise in sales, he says.

Richard Thomas from the UK-based network Traffic, which monitors wildlife trade, says that the issue is complex and it’s “not possible to say unequivocally” that the cause is Harry Potter. However, a 2015 report from Traffic on Indonesia’s bird markets also noted the jump in owl sales, and suggested that the rise in demand could be down to the popularity of the fictional character. In 2010, the network also found that the illegal owl trade was growing in India, where the animals are sought mainly for their purportedly magical properties.

Nijman says that owls can usually be bought for US$6–30 in Indonesia's bird markets — easily affordable for most people with a job.

The most popular variety are scops owls, and endangered species in same genus (Otus) are still being discovered on the country’s many islands2. That makes the owl trading a conservation issue, the researchers warn, because nearly all the birds for sale are caught in the wild.

Indonesian law forbids the trade of wildlife for which there is no official catch quota — and there isn’t one for owls. But according to the researchers, state authorities have not taken any action. The Indonesian government did not respond to repeated requests for comment by Nature.

The country doesn’t monitor its owl population, so researchers must rely on guesswork to estimate the impact of sales on wild numbers. “Owls are nocturnal, so it may be less apparent over a short period if there is a massive decline,” says Thomas.

The researchers propose that owls should be added to Indonesia’s protected species list to raise awareness among buyers that they are not suitable pets. Nijman compares the owls to cut flowers: beautiful to buy but doomed to die quickly. “They are alive and cute when you see them on the market,” he says, “but realistically they are already dead.”