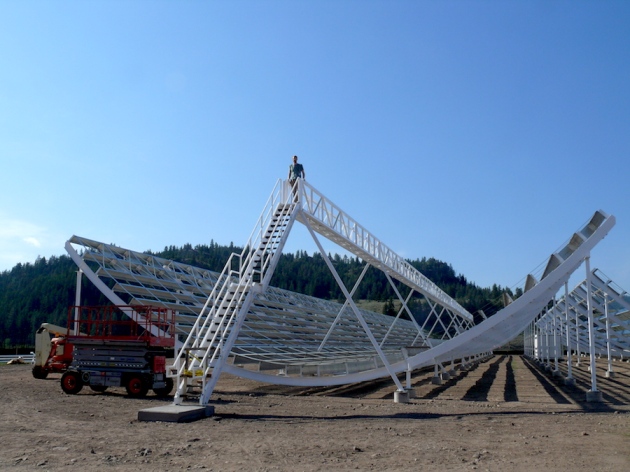 The CHIME telescope array will search for a particular kind of hydrogen emission from ancient galaxies.

It sounds almost too apt to be true. An observatory shaped like the half-pipes used by snowboarders, and dependent on technology originally designed for gaming and mobile phones, will soon be tasked with plugging a crucial gap in the cosmological record: what the Universe did when it was a teenager.

The information will allow cosmologists to gauge whether the strength of dark energy — the force accelerating the Universe’s expansion — has changed over time, an unresolved question that governs the fate of the cosmos.

Whereas typical radio telescopes have round dishes, the Canadian Hydrogen Intensity Mapping Experiment (CHIME) comprises four 100-metre-long, semi-cylindrical antennas, which lie near the town of Penticton in British Columbia.

From 2016, CHIME’s half-pipes, which are scheduled to be completed this week, will detect radio waves emitted by hydrogen in distant galaxies. These observations would be the first measurements of the Universe’s expansion rate between 10 billion and 8 billion years ago, a period in which the cosmos went “from being a kid to an adult”, says Mark Halpern, the leader of CHIME and an experimental cosmologist at the University of British Columbia in Vancouver (see ‘Unveiling the adolescent Universe’). Straight after the Big Bang 13.8 billion years ago, the rate of the Universe’s expansion slowed. But somewhere during the ‘adolescent’ period, dark energy — which eventually turned the Universe’s slowing expansion into the acceleration observed today — began to be felt, he says. 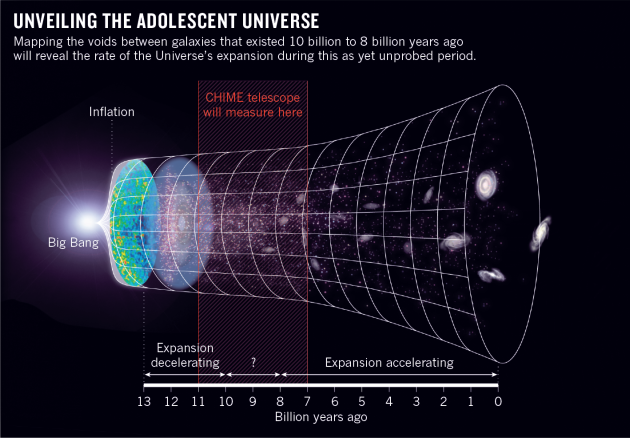 It is a window in time that has, until now, been closed. Cosmologists measure the Universe’s past expansion rate using ancient objects, such as supernova explosions and the voids between galaxies, that are so distant that their light is only now reaching Earth. Over the past few decades, such objects have revealed that the cosmos has been expanding at an accelerating rate for more than 6 billion years. And surveys of quasars — mysterious, super-bright objects that outshine the entire galaxies they lie in — have shown that until 10 billion years or so ago, the Universe’s expansion was slowing down.

But cosmologists have struggled to measure the expansion rate in the interim, leaving open the question of whether the strength of dark energy’s repulsive force may have varied over time.

CHIME is designed to fill the gap, says Kendrick Smith, an astrophysicist at the Perimeter Institute for Theoretical Physics in Waterloo, Canada, who will work on analysing CHIME’s data. The half-pipe antennas will allow CHIME to receive radio waves coming from anywhere along a narrow, straight region of the sky at any given time. “As the Earth rotates, this straight shape sweeps out the sky,” says Smith.

To sort out where individual signals are coming from, a custom-built supercomputer made of 1,000 relatively cheap graphics-processing units — the type used for high-end computer gaming — will crunch through nearly 1 terabyte of data per second. The team will also use signal amplifiers originally developed for mobile phones. Without such powerful consumer-electronics components, CHIME would have been prohibitively expensive, says experimental cosmologist Keith Vanderlinde of the University of Toronto, Canada, who is co-leading the project.

CHIME’s supercomputer will look specifically for radio waves with a wavelength that suggests an age of 11 billion to 7 billion years, emitted by the hydrogen in the interstellar space inside galaxies (at their source, such emissions have a wavelength of 21 centimetres). Researchers will then subtract the ‘radio noise’ in the same wavelength range that comes from the Milky Way and Earth.

Although CHIME will not be able to distinguish individual galaxies in this way, clumps of hundreds or thousands of galaxies will show up, says Vanderlinde. This will allow researchers to map the expansion rate of the voids between the clumps, and in turn to calculate the strength of dark energy during that time.

If the results imply that the strength of dark energy then was the same as it has been in the past 6 billion years, it could suggest that galaxies will eventually lose sight of each other. But if the strength of dark energy has changed over the eons, all bets are off: the Universe could collapse in a ‘big crunch’, for example, or be ripped apart into its subatomic components.

As well as mapping the adolescent Universe, CHIME could also detect hundreds of the mysterious ‘fast radio bursts’ that last just milliseconds and have no known astrophysical explanation. And it will help other experiments to calibrate measurements of radio waves from rapidly spinning neutron stars, which researchers hope to use to detect the ripples in space-time known as gravitational waves (see Nature 463, 147; 2010).

CHIME is part of a growing trend in astronomy. A number of experiments that are now active or in the planning stages, including the hotly anticipated Square Kilometer Array — to be built on sites in Australia and South Africa — are designed to look at hydrogen emissions with 21-centimetre wavelengths. These emissions are an untapped trove of cosmological information, says Tzu-Ching Chang, an astrophysicist at the Academia Sinica Institute of Astronomy and Astrophysics in Taipei who helped to pioneer the hydrogen mapping of galaxies in a 2010 study (T.-Z. Chang et al. Nature 466, 463–465; 2010). She likens the boom in hydrogen mapping today to the trend in the 1990s of studying the relic radiation of the Big Bang, which revolutionized cosmology.