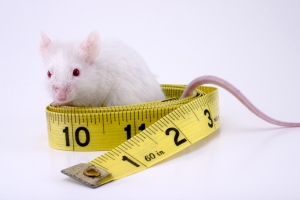 Obese mice lost weight after being fed the microbe Akkermansia muciniphila, which appears to have a symbiotic relationship with the inner lining of the intestine.

The gut is home to innumerable different bacteria — a complex ecosystem that has an active role in a variety of bodily functions. In a study published this week in Proceedings of the National Academy of Sciences1, a team of researchers finds that in mice, just one of those bacterial species plays a major part in controlling obesity and metabolic disorders such as type 2 diabetes.

The bacterium, Akkermansia muciniphila, digests mucus and makes up 3–5% of the microbes in a healthy mammalian gut. But the intestines of obese humans and mice, and those with type 2 diabetes, have much lower levels. A team led by Patrice Cani, who studies the interaction between gut bacteria and metabolism at the Catholic University of Louvain in Belgium, decided to investigate the link.

Mice that were fed a high-fat diet, the researchers found, had 100 times less A. muciniphila in their guts than mice fed normal diets. The researchers were able to restore normal levels of the bacterium by feeding the mice live A. muciniphila, as well as 'prebiotic' foods that encourage the growth of gut microbes.

The effects of this treatment were dramatic. Compared with untreated animals, the mice lost weight and had a better ratio of fat to body mass, as well as reduced insulin resistance and a thicker layer of intestinal mucus. They also showed improvements in a host of other indicators related to obesity and metabolic disorders.

“We found one specific common factor between all the different parameters that we have been investigating over the past ten years,” says Cani.

Cani’s team has started unravelling the complicated mechanisms through which the bacterium may influence metabolism. Restoring normal levels of A. muciniphila led to increased intestinal levels of endocannabinoids, signalling molecules that help to control blood-glucose levels and maintain the gut's defenses against harmful microbes.

A. muciniphila also seems to have a 'dialogue' with the cells of the intestinal lining and with the immune system, says Cani, sending a signal that affects the production of anti-microbial molecules, while increasing the production of mucus. It seems as if the bacterium is telling the host that it will take care of any invading harmful microbes in exchange for more food, he adds.

Cani “strongly believes” that A. muciniphila could one day be used to treat disorders such as obesity, diabetes and colitis in humans. “There is so much evidence in the literature that links this bacterium to human conditions,” he says.

Randy Seeley, an obesity researcher at the University of Cincinnati in Ohio, says that it is “ridiculously cool” that science can now link specific aspects of the microbiome to specific functions, and he is optimistic that the work will lead to useful treatments for humans, although that will take some time. “What we have to figure out is, what is the best way to change gut flora,” he says. “If you just toss bacteria in, they don’t stay.”

The fact that the immune system may be involved in the interaction between A. muciniphila and the body, Seeley adds, offers an intriguing possibility for another way to manipulate bacteria in the gut. “There will be drug targets that come out of that,” he says.