A proposed 15% budget cut is making for a troubled adolescence at the National Children's Study (NCS), an ambitious US government project that aims to chart biological, environmental and social influences on the health of 100,000 American children from before birth to age 21 years.

The study's managers at the National Institute of Child Health and Human Development (NICHD) in Bethesda, Maryland, say that they can cope with the White House's budget proposal, released on 13 February. This would cut funding for the programme by US$28 million, to $165 million in 2013 (see 'Belt tightening'). But their plan to save money, by recruiting study participants through health-care providers rather than by door-to-door recruitment, is worrying some of the study's scientists, who already feel shut out from its planning. 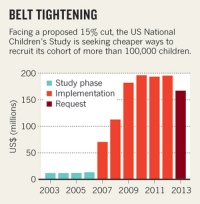 In 2010, a year after it started, the NCS's pilot phase had to expand from seven sites to 37 after recruitment rates fell well short of expectations. As the pilot winds down recruitment this year, it has enrolled only 4,000 subjects. The study, which could be used to probe the roots of conditions such as asthma, autism and diabetes, must therefore accelerate recruitment sharply after its main arm launches in 2013.

NICHD director Alan Guttmacher says that there was “understandable angst” among study-site directors the day the budget was made public. But NCS managers see room for savings, estimating that $30 million was spent on recruitment in 2011 alone. Although door-to-door recruitment is considered a gold standard in epidemiology, study managers believe that subjects can be recruited much more cheaply through health-care-providers' offices, where pilot-study data show that recruiters are much more likely to find eligible women who are pregnant or trying to become pregnant. The household recruitment has another downside, says Guttmacher: “It would take so long it would compromise the study.” A “scientifically compelling” study with a budget of $165 million is still possible, he says.

According to one of the study's principal investigators (PIs), however, money is already too tight. “The idea that there are cost savings to be made here is absolutely absurd,” says the researcher, who contends that many PIs have yet to receive funding for their data-management systems that was promised by NICHD managers last October. Some are coping by diverting funds from other parts of the study; others have simply stopped entering data for study subjects. The study's managers say that the PIs have been adequately funded.

Some PIs are also worried that recruitment at health-care-providers' offices would bias the study and render its findings inapplicable to the wider population. They point to a 2008 Institute of Medicine report that called the household-based sampling approach one of the study's main strengths.

And some scientists complain that they had no input into the decision to change the recruiting strategy, which many failed to hear about even after the budget was announced. “We don't have any full, thorough discussion of this,” says Nigel Paneth, a paediatrician at Michigan State University in East Lansing who is PI at the NCS site in Wayne County. “What this study needs is full scientific input, not Bureaucratic Planning Central.” Guttmacher notes that government officials cannot talk about White House budget proposals before they are released.

But with many congressional districts hosting study centres, the programme has proved resilient. The administration of former president George W. Bush repeatedly tried to cancel it, but Congress always restored full funding.