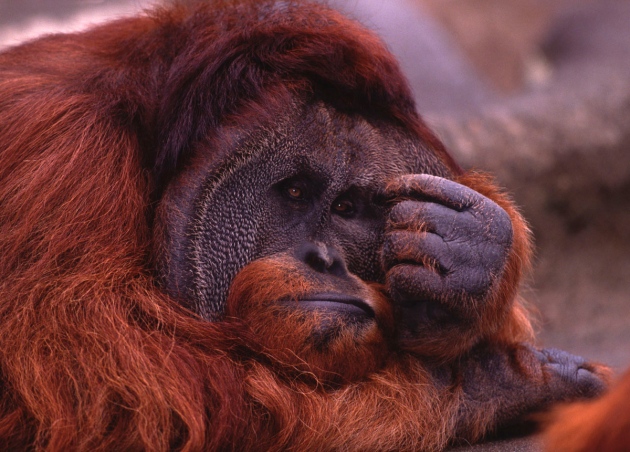 Feeling down: orangutans experience a mid-life crisis just like humans do.

They may not take up surfing or start second careers as cupcake-makers, but chimpanzees and orangutans seem to go through a ‘mid-life crisis’, just like humans.

A study of 508 great apes in captivity published today1 shows that the animals’ sense of well-being bottoms out in their late 20s to mid-30s, the ape equivalent of middle age, before rebounding in old age.

The finding that mid-life crises may not be uniquely human suggests that the events might have a biological, rather than a sociological, cause.

Men and women worldwide, regardless of their wealth or status, experience a dip in happiness at middle-age, generally defined as from the mid-30s to late 50s. Despite this universality, social scientists have struggled to identify the underlying cause of the dissatisfaction. Social and economic factors, such as financial hardship and the failure to realize unrealistic ambitions, are possible causes.

Alexander Weiss, a psychologist at the University of Edinburgh, UK, and his team set out to see if there might be a biological factor involved in the crises. They sought to assess the well-being of captive chimpanzees and orangutans as judged by their keepers or those who knew them well.

The apes covered all age ranges, and their ‘happiness’ was rated through a survey answered by their keepers. The survey covered four criteria: the animals’ overall mood; how much pleasure they got out of socializing; their success in achieving goals such as obtaining food and objects they desire; and how happy the keeper would be if he or she were that animal for a week.

The survey is admittedly anthropomorphic, says Weiss, but he adds that it is easy for someone who spends a lot of time with an ape to gauge its mood. Moreover, his previous work shows that the measure of well-being is consistent when measured by different caretakers, and is based, in part, on inherited genetic factors.

Among three different groups of chimps and orangutans surveyed, the happiest tended to be the oldest and youngest, and the most dissatisfied tended to be in their 30s. The study, however, is a snapshot — it didn't follow any of the apes over time — which means there could be confounding factors such as the early death of unhappy apes. Nonetheless, Weiss believes the results offer a true picture.

Frans de Waal, a primatologist at Emory University in Atlanta, Georgia, would have liked to see a harder measure of ape happiness, such as stress hormone levels, but says that the conclusion, if real, could have implications for understanding our own mid-life crises. “Instead of ascribing the middle-age dip to the complexities of professional life or other socioeconomic and cultural factors,” he says, “it may well be that certain physical characteristics, hormone levels or emotion-regulation skills play a role.”

Weiss is intrigued by the idea that all apes share a common biological basis for a dip in happiness in middle age. Age-related changes in the brain offer one possibility. “Maybe evolution needed us to be at our most dissatisfied in midlife,” says co-author Andrew Oswald, who is based at the University of Warwick, UK. Unhappiness can be a catalyst for change, potentially spurring unhappy adults to act more adaptively, for instance, by seeking out mates.

Any explanation is speculative, Weiss admits, emphasizing that even if there is a common biological root, the effects of the crises are filtered through cultural practices and environmental influences. “I don’t think you’ll find chimpanzees buying bright red shiny cars,” he says.