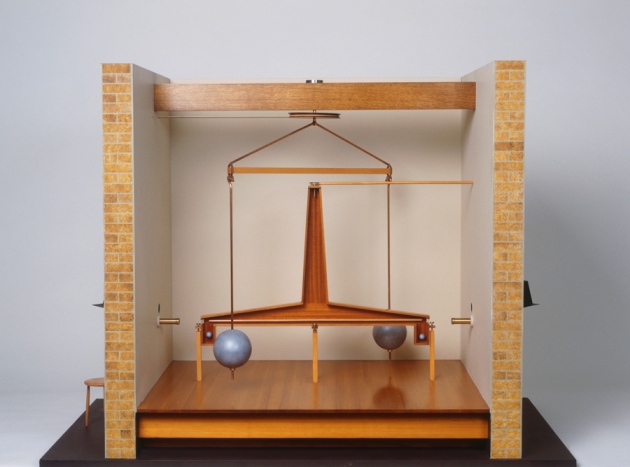 A mock-up of a torsion balance used by British natural philosopher Henry Cavendish to measure G in 1798.

It is one of nature’s most fundamental numbers, but humanity still doesn’t have an accurate value for the gravitational constant. And, bafflingly, scientists’ ability to pinpoint G seems to be getting worse. This week, the world’s leading gravity metrologists are meeting to devise a set of experiments that will try to set the record straight. This will call for precision measurements that are notoriously difficult to make — but it will also require former rivals to work together.

In his 1687 Philosophiæ Naturalis Principia Mathematica, Isaac Newton outlined his theory of gravity: that the force between two objects is proportional to the product of their masses and inversely proportional to the square of the distance between them. G is the constant by which the masses must be multiplied to put an absolute value on that attraction. But more than 300 years later, the constant — known as Big G to distinguish it from little g, the acceleration due to gravity on Earth — is known for sure to only 3 significant figures (6.67384(±0.0008) × 10−11 m3 kg−1 s−2).

Independent groups of physicists have been trying to pin down the true value of the constant for decades, but in recent years, rather than converging on an ever more precise figure, the results of their experiments have been diverging, causing the uncertainty in the official figure to rise (see ‘Trouble with Big G’). “There’s no other fundamental constant of physics where we’ve had such a wide dispersion of results,” says Terry Quinn, former director of the International Bureau of Weights and Measures (BIPM) in Paris. Some or all of the experiments must either grossly underestimate their uncertainty or miss significant systematic errors, he adds.

On 9 and 10 October, metrologists will meet at the US National Institute of Standards and Technology (NIST) in Gaithersburg, Maryland, to devise a plan to resolve the issue.

Gravity is hard to measure because it is an extremely weak force. In a tussle over a paper clip, for example, the electromagnetic force of a small magnet beats the gravitational pull of the whole of planet Earth. To measure G, scientists must eliminate every other potentially perturbing force. The oldest, and still most common, method measures the tiny rotation of a torsion balance — a rod hanging on a wire — caused by the attraction between masses at either end of the rod. Others include measuring the movement of pendulums — or the change in weight of test objects suspended on a ‘balance beam’ — in response to the presence of giant masses, and measuring the acceleration of cold rubidium atoms.

A big item on the agenda at the meeting will be debating how to choose a small number of these experiments to be conducted by members of a consortium, this time with an unprecedented level of oversight. Each experiment will be repeated by two independent groups, using identical sets of equipment created and tested at a third institution. While the experiments are going on — and there is still time to fix them — experts from outside those two groups will hunt for errors. In the past, says Quinn, who is a driving force behind the NIST meeting, scientists have picked holes in each other’s experiments only after they were published, making it difficult to verify whether those problems were really the cause of an error.

Although meeting attendees are enthusiastic about the project, picking the experiments will not be easy, because each scientist is likely to gun for their own preferred method. “I’ve been working for 12 years on my experiment,” says Andrea De Marchi, a physicist at the Polytechnic University of Turin in Italy, who will be presenting his technique to the meeting. “I guess everybody else has too.”

Until now, scientists measuring G have competed; everyone necessarily believes in their own value, says Stephan Schlamminger, an experimental physicist at NIST. “A lot of these people have pretty big egos, so it may be difficult,” he says. “I think when people agree which experiment to do, everyone wants their idea put forward. But in the end it will be a compromise, and we are all adults so we can probably agree.”

Working together could even be a stress reliever, says Jens Gundlach, an experimental physicist at the University of Washington in Seattle. Getting a result that differs from the literature is very uncomfortable, he says. “You think day and night, ‘Did I do everything right?’”

Cash is another hurdle. Big G experiments have often piggybacked on other projects. Justifying funding for them can be tough, because there are currently no theories or other experiments that rely on G having a particular value: in determining the orbits of satellites or planets, for example, only the result of multiplying the gravitational constant by the mass of the central body is relevant, and that can be determined precisely enough without knowing G.

Big G might yet find a use in quantum gravity, the attempt to reconcile the theory of gravity with quantum mechanics, but for now, the main motivation for chasing the constant is simply that not having a reliable value is irksome. “It’s hard to live with discrepancy,” says Schlamminger. It is possible that G appears to be so capricious because our basic understanding of gravity is flawed, he says, but that seems unlikely.

Quinn points out that NIST is hosting this week’s meeting, and he hopes that the institute will provide initial funding for the project, but nothing is yet firm. Assuming that cash is found, the consortium could have a reliable value for G in the next five years, says Quinn, or at least a good handle on where disagreements lie. “There must be a solution to this,” he says, “there must be.”