As though someone had pulled a plug in the oceans and drained them away, a sea-floor map has exposed thousands of never-before-seen underwater mountains and ridges. The map — generated by the highest-resolution gravity model ever made for the oceans — will guide deep-sea research for years to come.

An international team of researchers led by David Sandwell, an oceanographer at the Scripps Institution of Oceanography in La Jolla, California, publishes the map in the 3 October issue of Science1. The team created it using data mostly from two satellites: CryoSat-2, from the European Space Agency, and Jason-1, from NASA and the French space agency CNES.

Both satellites sought to chart the planet, but with different goals. The ongoing CryoSat-2 mission studies the polar ice caps, whereas Jason-1 studied changes in sea level before it was turned off last year. Both probes carried radar altimeters, instruments that measure the precise distance between the satellite and the surface of the land or ocean below.

Out with the old

By measuring tiny changes in the surface level of the ocean, then subtracting the effect of temporary phenomena such as waves, the satellites mapped how the ocean responds to the gravitational pull of underwater features such as mountain ranges. In essence, the probes map the sea surface as a proxy for the sea floor below.

“Over many years we’ve only had about two opportunities to get this kind of data,” says Sandwell. The first was in 1995, when the data from the US Navy's GEOSAT satellite were declassified and Europe’s ERS-1 satellite finished working in an orbit that was suitable for gravity mapping. That combination of data resulted in a 1997 Science paper2 from Sandwell and his team — at the time the sharpest global sea-floor map.

The latest data have now made the map at least twice as good. “Everything is getting sharper and popping into focus,” says Sandwell.

In the old map, scientists could detect the underwater volcanoes known as seamounts if the features rose more than about 2 kilometres from the seafloor. In the latest map, as many as 20,000 previously unknown seamounts, between 1.5 and 2 kilometres high, pop into view scattered along relatively young sections of the sea floor, says Sandwell. 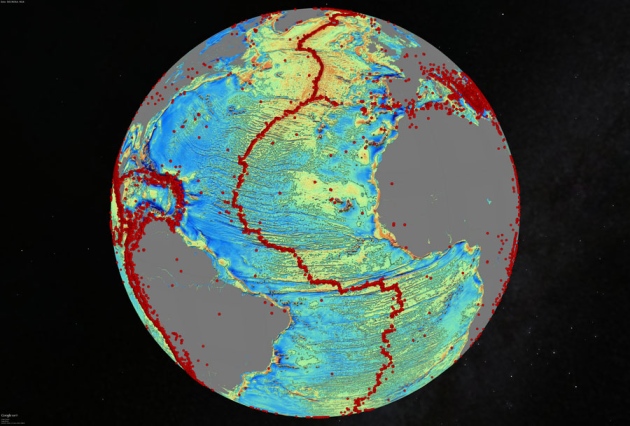 The gravity model of the North Atlantic ocean basin reveals tectonic history in sharp detail. Red dots show the location of past earthquakes of magnitude 5.5 or higher.

The map can also peer more clearly beneath sediments blanketing the sea floor. In the northern Indian Ocean, it reveals an underwater ridge running all the way through the Bengal Fan, a blanket of sediments more than 8 kilometres thick made up of the remains of rocks washed down from the high Himalayas. Similarly, the map revealed ridges in the Gulf of Mexico where fresh magma once rose to the surface to form new ocean crust. These ridges are now extinct and buried by sediment, but geologists can use their traces to reconstruct how the Yucatan and North American crustal plates moved in this region over time.

Geologists around the world can use the map to reconstruct how oceanic crustal plates shifted, says Joanne Whittaker, a marine geoscientist at the University of Tasmania in Hobart, Australia. She studies the poorly mapped parts of the Indian and Southern Oceans between Antarctica and Australia, and relies on gravity maps to help plan her research voyages. Whittaker has an upcoming cruise aboard Australia’s new research vessel, Investigator, to study the underwater Gulden Draak Knoll, which may be a fragment of an ancient continent. Thanks to the gravity data, she says, “we will be able to plan our voyage with more confidence, and we may even try to adjust the voyage somewhat based on all the new information.”

Oil and gas companies are also likely to make use of the map, says Sandwell. Among other things, it has revealed an extinct spreading ridge off the coast of Brazil, in an area of intense petroleum exploration. US energy company ConocoPhillips, based in Houston, Texas, was one of the early funders of Sandwell's research; other than such companies, he says, “almost nobody cares about the deep ocean any more”.

But there is only so much that the gravity map can do. It can resolve sea-floor features to about 5 kilometres, which is enough to discover a seamount but not enough to pinpoint smaller features, says Sandwell. Getting down to a resolution of about 100 metres will still require research ships pinging sonar to the seafloor. Even sharper detail — such as in the ongoing search for the Malaysia Airlines flight MH370 — requires the time-consuming process of towing sonar apparatus behind a ship.

For now, CryoSat-2 has funding to operate for at least three more years. Sandwell thinks that he can improve his gravity maps even further with more of the satellite's data.