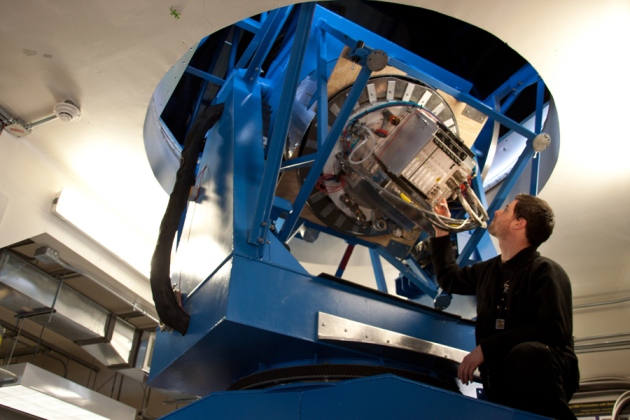 Physicist Justus Brevik of the California Institute of Technology working on the BICEP2 telescope's readout electronics.

Astronomers who announced in March that they had evidence of waves originating from the Big Bang have adopted a more cautious stance as they publish their results in a peer-reviewed journal — just as new independent data cast additional doubt on the original findings.

In a paper published on 19 June in Physical Review Letters1, the BICEP2 collaboration, named after the South Pole telescope they used to look at a patch of the microwave sky, acknowledges that the foreground effect of dust in the Milky Way may account for a larger fraction than previously estimated — and possibly all — of what had appeared to be a signal from the dawn of time.

In addition, presentations earlier this week at a cosmology conference in Moscow, based on observations from the European Space Agency’s Planck satellite, add fresh evidence that what BICEP2 saw could be entirely due to a confounding effect of dust.

The exuberant 17 March press briefing at which John Kovac of the Harvard-Smithsonian Center for Astrophysics in Cambridge, Massachusetts, announced the original results led to talk of Nobel prizes, partly because it seemed to confirm a popular but outlandish theory about the birth of the universe (see 'Telescope captures view of gravitational waves').

According to that theory, first proposed in 1980, the universe began with a brief but extraordinary period of expansion called inflation. Inflation would generate gravitational waves, giving a subtle twist to the polarization of the cosmic microwave background (CMB), the ubiquitous whisper of radiation left over from the Big Bang. That was the twist that BICEP2 was now seeing in the sky.

Dust grains in the Milky Way could imprint a similar polarization pattern in the CMB as gravitational waves can, but on the basis of several different predictions of the Galaxy'scontribution the researchers concluded that their data were more likely to originate from primordial gravitational waves.

Because a key source of data was not then publicly available, most of the mathematical models used by Kovac and his colleagues to analyze the BICEP2 observations did not include information from the Planck satellite, which had been performing scans of the full microwave sky between 2009 and 2013.

The BICEP2 team did use one model that relied on preliminary Planck data, but other scientists, including Raphael Flauger of the Institute for Advanced Study in Princeton, New Jersey, have suggested that the researchers misinterpreted that information and that a correct analysis suggests that dust could account for much or all of the signal (see 'Big Bang finding challenged')2. The BICEP2 team has now excluded that model from its analysis because of “unquantifiable uncertainty,” the researchers note in a footnote to their article.

But the other models used by the BICEP2 team are also highly uncertain and based on older estimates of dust that are not likely to be correct, notes cosmologist Uroš Seljak of the University of California, Berkeley, a co-author of another paper critical of the BICEP2 analysis3.

Members of the team say that they still believe that gravitational waves are the most likely explanation for the signal they detected. However, in their paper1 the authors note that the models they used to analyze their data “are not sufficiently constrained by external public data to exclude the possibility of dust emission bright enough to explain the entire excess signal”.

The contribution from dust “appears to be somewhat higher than the pre-Planck models predicted,” says BICEP2 team member Jamie Bock of the California Institute of Technology and NASA’s Jet Propulsion Laboratory, both based in Pasadena. “We still say the data disfavour an all-dust interpretation,” he adds, “which is what we said on the topic of dust in March.”

Cosmologist David Spergel of Princeton University in New Jersey says he is pleased that the BICEP2 team has acknowledged the possibility that their entire signal might be due to dust. But the article, revised since it first appeared on the arXiv.org repository on 17 March, “is still somewhat flawed”, he says. “I believe that the cosmology community now recognizes that we will need to wait for Planck for a discovery of gravitational waves or the clarification that this signal is due to polarized dust,” he says.

The definitive Planck maps won’t be released until October. But at the Moscow cosmology meeting on 16 June, Planck astronomer Jean-Loup Puget of the University of Paris-Sud in Orsay reported new findings suggesting that dust polarization accounts for much more of the signal detected in the south polar patch of sky examined by BICEP2 than the team had originally estimated. Previous Planck analyses did not show the amount of dust polarization in that patch of sky or other high-galactic-latitude regions of the Milky Way because of the relative sparseness of dust and low signal compared to noise in these regions (see 'Milky Way map skirts question of gravitational waves').

Using for the first time the newest Planck maps available, Puget and his collaborators have directly examined the polarization of dust in these high galactic regions rather than extrapolating from dustier regions in the plane of the Milky Way. Averaging over some 350 high-galactic-latitude patches of sky similar in size to the region observed by BICEP2, Puget reported that polarization from interstellar dust grains plays a significant role and might account for much of the BICEP2 signal that had been attributed to inflation-generated gravitational waves. Puget told Nature that an article detailing these findings would be published in about six weeks.

There is still hope, says Seljak, that the BICEP2 team has observed the real gravitational wave signal. “But at this point this appears more of a wish rather than rooted in any convincing argument.”