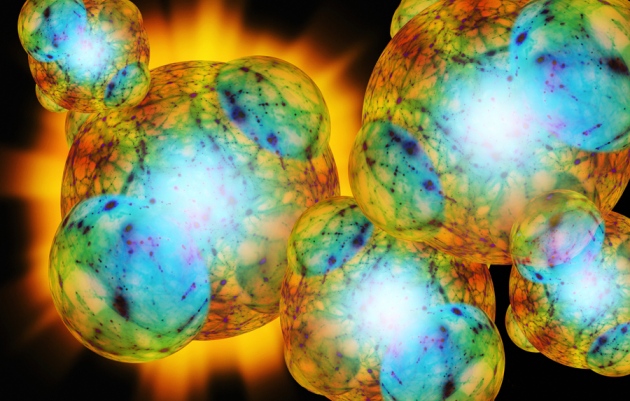 Artist's rendering of 'bubble universes' within a greater multiverse — an idea that some experts say was bolstered with this week's discovery of gravitational waves.

On 17 March, astronomer John Kovac of the Harvard-Smithsonian Center for Astrophysics presented long-awaited evidence of gravitational waves — ripples in the fabric of space — that originated from the Big Bang during a period of dramatic expansion known as inflation.

By the time the Sun set that day in Cambridge, Massachusetts, the first paper detailing some of the discovery’s consequences had already been posted online1, by cosmologist David Marsh of the Perimeter Institute for Theoretical Physics in Waterloo, Canada, and his colleagues.

The authors wrote that the measurements made by Kovac's team using the BICEP2 telescope at the South Pole all but ruled out a class of models that attempted to explain both inflation and another cosmic mystery — the nature of dark matter — based on a hypothetical elementary particle called the axion. The researchers did not rule out all axion models, however, only that “this particular class of axions make up only a tiny fraction of the dark matter”, says Marsh.

Cosmologist Marc Kamionkowski of Johns Hopkins University in Baltimore, Maryland, agrees that some axion models no longer work, “because they require inflation to operate at a lower energy scale than the one indicated by BICEP2”.

Kamionkowski says that the BICEP2 discovery would also rule out a plethora of other theories in one fell swoop, including several other ideas on the properties of the energy field that drove inflation. “The family of acceptable models has been collapsed tremendously,” he says.

“There’s a great spring cleaning, with almost everything ruled out,” says Max Tegmark, a cosmologist at the Massachusetts Institute of Technology (MIT) in Cambridge. “This is really shaking up not just the experimental field but the theoretical world.”

The BICEP2 data would eliminate about 90% of inflationary models, Andrei Linde, a cosmologist at Stanford University in California, told a packed auditorium at MIT the day after the BICEP2 announcement (see picture below). Many of those models do not produce gravitational waves at detectable levels, said Linde, who is one of the founders of inflation theory.

But he said that the findings would agree remarkably well with ‘chaotic inflation’, a simple version of inflation Linde developed 30 years ago. In Linde's model, inflation never completely ends, stopping only in limited pockets of space, while continuing with its exponential expansion elsewhere. Chaotic inflation would produce not just our Universe but a multiverse containing many pocket universes, each with its own laws of physics, an idea that critics say would be untestable.

Linde also says that gravitational waves would seem to rule out an alternative model to inflation known as the cyclic Universe, in which two ‘brane worlds’ — three-dimensional universes floating inside a higher-dimensional space — collide to produce the Big Bang. That theory does not produce gravitational radiation.

Paul Steinhardt, a theoretical physicist at Princeton University in New Jersey and an originator of the cyclic theory, agrees that — if the BICEP2 findings are confirmed — his theory is now dead, but he says he hasn’t given up hope that a variant of the model might generate the radiation.

The BICEP2 results will also send some string theorists back to the drawing board, says Frank Wilczek, a theoretical physicist and Nobel laureate at MIT. String theory posits that elementary particles are made of tiny vibrating loops of energy. Efforts to combine string theory with cosmology have led to inflationary models that generate gravitational waves with energies much lower than the level detected by BICEP2, he says.

Theoretical physicist Eva Silverstein of Stanford says she disagrees that string theory-based models of inflation are in any sort of trouble. “There is no sense in which we are forced to start over,” she says. She adds that in fact a separate class of theories that involve both axions and strings now look promising.

Linde agrees. “There is no need to discard string theory, it is just a normal process of learning which versions of the theory are better,” he says. “All of us, not just string theorists, should go back to the drawing board, but not because we failed, but because we learned something very important and now we should use this knowledge to make further steps.” 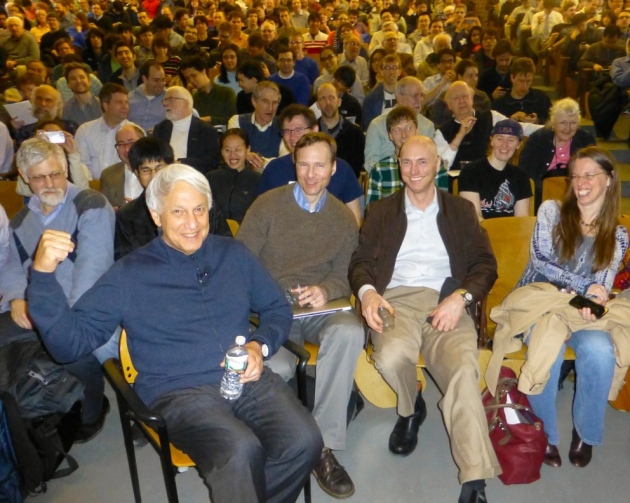 Andrei Linde showing off his bicep before giving a talk on the BICEP2 results at MIT on 18 March. From left to right, Nature News correspondent Ron Cowen; Linde; BICEP2 lead researcher John Kovac; physicist Clement Pryke of the University of Minnesota (UM) in Minneapolis, who led the BICEP2 data analysis; and UM particle astrophysicist Lucy Fortson.