On the list of reasons a grant application might be rejected, most researchers would put ‘typesetting’ fairly low.

Hence the amazement when Susannah Maidment, a palaeontologist at Imperial College London, announced on social media that her fellowship application had been thrown out for being in the wrong font.

“Rejected. For using Calibri,” she tweeted on 27 October, referring to the font that is the default setting in certain versions of Microsoft Word. But the funding body she applied to — the UK’s Natural Environment Research Council (NERC) — says that it regularly rejects a small number of applications for using the wrong font, although it will not comment on Maidment’s specific case.

Fellowship grants mean the difference between having a job and being unemployed for many early-career researchers. Preparing applications takes huge amounts of work. “These aren’t trivial applications. It’s a significant piece of research in its own right,” Maidment says.

NERC specifies in its current guidelines to applicants — which are dated September 2015 — that their documents should be “in Arial 11 or other sans serif typeface of equivalent size to Arial 11”. The guidelines add: “Arial narrow and Calibri are not allowable font types and any proposal which has used either of these font types within their submission will be rejected”.

But a previous version of the guidelines, which Maidment says she used when she started to write her application before September, did not explicitly ban Calibri. Those guidelines simply specified “Arial or other sans serif typeface of equivalent size”.

What would happen if grant reviews were made public?

In a statement NERC said it could not comment on specific cases, but said that it had clear instructions on how to apply for funding on its website. These are in place to ensure all applicants have the same amount of space to make their applications, it said.

“We have taken this strict approach, because we were returning up to a third of proposals where applicants were not adhering to the above rules. This policy ensures efficient use of limited resources and taxpayers’ money,” says the NERC statement. “We rejected just 4% of applications to the July standard grant round, because applicants used the wrong font or font size.”

Careful font choice might allow a researcher to squeeze more details into their grant application, perhaps boosting their chances of success. Some fonts do allow a small number of extra words to be squeezed onto a page. “Size for size, it’s probably going to set a tiny bit smaller [in Calibri] than Arial,” says Paul Luna, a typography and text researcher at the University of Reading. Formatting choices such as the width of page margins can change word counts too. 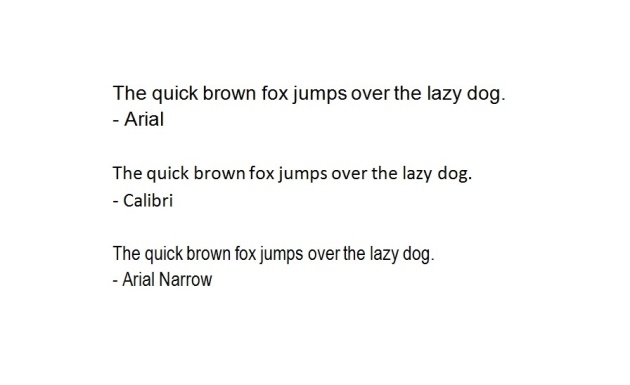 Font choice can change the number of words that fit on a page.

But Maidment says that if NERC is going to be “so concerned” about such details, it should just introduce a word or character limit. “I would like to be judged on the science, not how I formatted it,” she says.

Luna adds that the former NERC guidance phrasing of “Arial or other sans serif typeface of equivalent size” is ambiguous. “I doubt if anyone would know what that means,” he says, as typographers generally use the ‘x height’ — the height of the letter x — when talking about the size of a letter.

“It’s incredibly unfortunate and frustrating that this kind of thing happens," says Steve Brusatte, a palaeontologist at the University of Edinburgh, in reference to Maidment's case.

Although a serious error should be grounds for rejection, says Brusatte, for minor formatting issues such as fonts and margin sizes funding agencies should allow people to correct the problem rather than sending them back to square one in the application process. “I don’t think anyone would dispute we need rules and guidelines. But with some little thing like this you should be given a chance to address it if it’s not egregious.”

NERC is not alone in making rules on font use. The US National Institutes of Health demands Arial, Helvetica, Palatino Linotype, or Georgia typefaces, in black and at 11 points or above in size.

The US National Science Foundation (NSF) demands 10 point Arial, Courier New, or Palatino Linotype, or 11 point or larger Times New Roman or Computer Modern fonts. “Small type size makes it difficult for reviewers to read the proposal; consequently, the use of small type not in compliance with the above guidelines may be grounds for NSF to return the proposal without review,” say the guidelines.