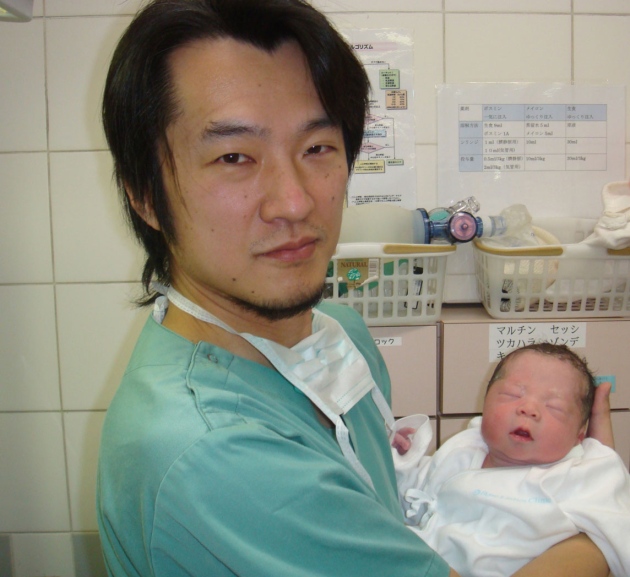 Kazuhiro Kawamura, who was part of a team that tried a new fertility treatment, holding a boy born from a previously infertile woman.

A previously infertile woman has given birth to a healthy baby after undergoing a procedure that involved removing her ovaries and stimulating them in the lab to produce eggs. The fertility treatment, dubbed in vitro activation, could offer hope to millions of women who have problems with ovulation.

In vitro activation addresses a condition called primary ovarian insufficiency, or premature ovarian failure, whereby egg-containing ovarian follicles do not grow in the way that they are supposed to. Few, if any, eggs ever reach maturity. As many as 1% of women of reproductive age are infertile because of the condition, and egg donation is the currently the only option available to help these women to become pregnant.

But in the new procedure, described in this week's Proceedings of the National Academy of Sciences1, physicians removed study participants' ovaries, cut them into small pieces and treated them with growth-stimulating drugs. After two days, some pieces were then 'grafted' back into the women's Fallopian tubes, and monitored for follicle growth. In some participants, mature eggs were retrieved, and these underwent the standard process of in vitro fertilization.

The latest study relied on understanding a cell-signalling pathway called Hippo. “This pathway serves as a ‘brake’ to prevent overgrowth of organs,” says Aaron Hsueh, an obstetrician–gynaecologist at Stanford University in California, and lead author of the study.

In women with premature ovarian failure, this pathway seems to be too good at its job. The researchers cut the ovaries into pieces, which disrupted the Hippo pathway and thus prevented it from halting follicle growth too soon. They then gave extra encouragement to another signalling pathway called Akt — a step that enhanced follicle growth even further.

Having been previously successful in mice, the procedure was tried on 27 women with premature ovarian failure. While some of the women were found to have no follicles at all in their ovaries, 13 of them did have at least some immature follicles, and the treatment led to follicle growth in eight of them. For the other 14 women, the treatment had no positive results.

Mature eggs were eventually retrieved from five women and were used for in vitro fertilization. One of the women, aged 29 at the time of treatment, gave birth to a baby boy of 3.3 kilograms after a 37-week pregnancy. Another woman has an ongoing pregnancy, and the other three women are at various stages of the treatment. The team hopes that the procedure's eventual success rate could reach up to 30%.

Too good to be true?

Marcelle Cedars, a reproductive endocrinologist at the University of California in San Francisco, says that the authors might have rushed too quickly to test the procedure in humans. “It appears they documented birth of healthy pups in the preliminary mouse studies, but there is no evidence about growth, development and/or fertility of this generation” of mice, she says.

Similarly, Jon Hennebold, a reproductive and developmental scientist at the Oregon National Primate Research Center in Beaverton, suggests using non-human primate models to look at the long-term consequences for those born as a result of this treatment.

The study authors suggest that their treatment could be useful for middle-aged infertile women, but not everyone is so optimistic. “You need a good egg inside the follicle,” says Richard Paulson, head of the fertility practice at the University of Southern California in Los Angeles. “This was a 29-year-old woman with a 29-year-old egg. With a 40-year-old, you could do everything they did, but you’d still have a 40-year-old egg.” Furthermore, he says that the technique in this study was “unbelievably clumsy”.

Regardless, “the bottom line is there's a baby that was born to someone who couldn’t get pregnant otherwise. It’s very exciting”, adds Paulson.