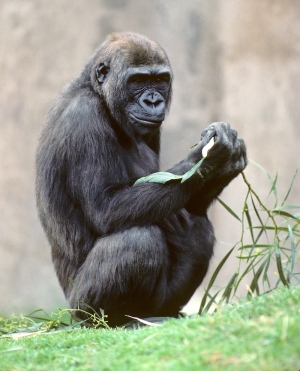 Whole-genome sequencing of Kamilah the western lowland gorilla will help in our understanding of our own evolutionary history.

Kamilah lives in San Diego, California, is 35 years old, weighs 136 kilograms and has a dark fur coat covering her skin. And she is the first gorilla to have its full genome sequenced1.

Researchers have already sequenced the genomes of humans, chimpanzees2 and orang-utans3. Understanding these genetic catalogues, from our closest living relatives, can reveal much about our evolutionary path — such as when we diverged from our primate cousins and what makes humans different from apes.

After chimps, gorillas are the closest living relative of humans. “When humans and chimps diverged it wasn’t long after gorillas had separated from the same lineage,” says Aylwyn Scally, whose team at the Wellcome Trust Sanger Institute in Hinxton, UK, led the sequencing effort.

“Having additional lineages puts human evolution into important perspective,” says Wolfgang Enard, who works on human evolutionary genetics at the Max Planck Institute for Evolutionary Anthropology in Leipzig, Germany, but was not involved in the study.

Overall, the data suggest that gorillas split from their common ancestor with humans and chimps about 10 million years ago, and that chimps and humans split from each other about 4 million years after that. This helps to clear up the evolutionary conundrum of the three types of great ape. “For a long time there was a discordance between the fossil evidence and genetic estimates, in the sense that genetic estimates came up with speciation times that were more recent,” says Scally.

But the genome sequencing has thrown up surprises, too. The standard view of the great-ape family tree is that humans and chimps are more similar to each other than either is to the gorilla — because chimps and humans diverged more recently. But, 15% of human genes look more like the gorilla version than the chimp version.

Much of the 15% is in sections of the genome that do not code for proteins. But the researchers also looked at functional gene changes. They found that certain genes — including some involved in hearing and brain development — had gone through more rapid changes than expected in both the gorilla and human lineage.

Some of these rapid changes are puzzling: the gene LOXHD1 is involved in hearing in humans4 and was therefore thought to be involved in speech, but the gene shows just as much accelerated evolution in the gorilla. “But we know gorillas don’t talk to each other — if they do they’re managing to keep it secret,” says Scally.

This weakens the connection between the gene and language, says Enard. “If you find this in the gorilla, this option is out of the window.”

The sequencing of the gorilla genome could also have an influence on conservation. “People can start to take the genome and try to look for bits of it that might be linked to animals’ fitness,” says Harry Marshall, a primate researcher at the Zoological Society of London.

So what species should be the next to join the genome-sequencing club? There are hundreds of primate species, and in an ideal world Enard would like to sequence them all. But there is not much point without data on behaviour and physiology. “We want phenotypes too”, he says.