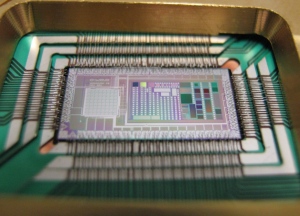 The D-Wave Two quantum computer has a 512-qubit processor (pictured) that can do some calculations thousands of times faster than conventional computers.

D-Wave, the small company that sells the world’s only commercial quantum computer, has just bagged an impressive new customer: a collaboration between Google, NASA and the non-profit Universities Space Research Association.

The three organizations have joined forces to install a D-Wave Two, the computer company's latest model, in a facility launched by the collaboration — the Quantum Artificial Intelligence Lab at NASA's Ames Research Center in Moffett Field, California. The lab will explore areas such as machine learning — making computers sort and analyse data on the basis of previous experience. This is useful for functions such as language translation, image searches and voice-command recognition. “We actually think quantum machine learning may provide the most creative problem-solving process under the known laws of physics,” says a blog post from Google describing the deal.

The Google-led collaboration is only the second customer to buy a computer from D-Wave, which is based in Burnaby, Canada. Aerospace giant Lockheed Martin, headquartered in Bethesda, Maryland, was the first. Lockheed purchased a D-Wave quantum computer in 2011 and installed it in a new Quantum Computation Center at the University of Southern California (USC) in Los Angeles. D-Wave declines to disclose the price of their computers.

Both quantum-computing centres — the one at USC and the one at Ames — have reserved 20% of their computer time for access by outside researchers. “Judging by the third-party requests we've had, I'd say there should be plenty of demand — probably more than can be accommodated,” says Daniel Lidar, director of the USC centre. So far, people have mostly used these machines to explore possible applications of quantum computing and to investigate how the computer behaves, rather than to solve previously unanswered problems.

The D-Wave computer is unusual because it uses quantum bits (qubits) — bits that can exist in two states, on and off, simultaneously — to speed up calculations, and because it does not operate on the normal 'gate' model of computing, whereby logic gates are used to manipulate those bits. Instead, it is an 'adiabatic' computer, which reads out the ground state of its qubits to find a solution. The academic community has favoured the gate model, which has a better-developed theory behind it. But the adiabatic model has proven much easier to build, allowing D-Wave to double its processor size every year. The D-Wave Two has 512 qubits.

Adiabatic computers are particularly well suited to solving ‘optimization problems’, in which a number of criteria all fight to be met at the same time. One example is trying to find the lowest-energy fold for a protein, the various amino acids of which attract or repel each other differently. The D-Wave computer is not a 'universal' computer that can be programmed to tackle any kind of problem. But scientists have found they can usefully frame questions in machine-learning research as optimisation problems1.

D-Wave has battled to prove that its computer really operates on a quantum level, and that it is better or faster than a conventional computer2. Before striking the latest deal, the prospective customers set a series of tests for the quantum computer. D-Wave hired an outside expert in algorithm-racing, who concluded that the speed of the D-Wave Two was above average overall, and that it was 3,600 times faster than a leading conventional computer when working on the specific type of problem that the quantum computer was built to solve.

Whether D-Wave will make for faster-running or better artificial-intelligence systems is yet to be seen. Lidar says that he has seen faster solvers. “Every problem we have tested can still be solved faster on classical computers,” he says.