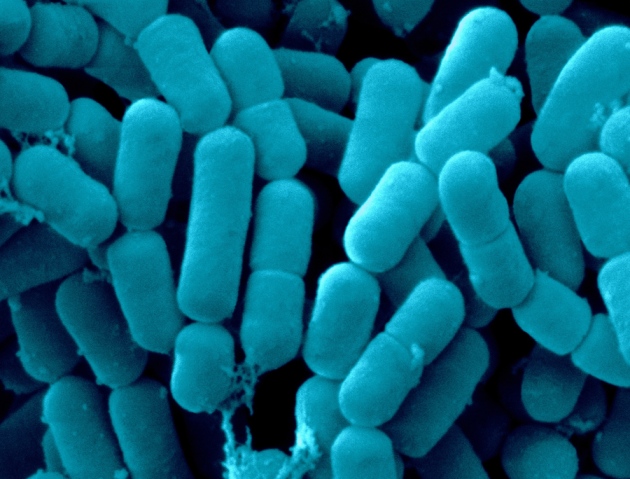 Synthetic biologists hope to treat disease in the gut by making Lactobacillus bacteria (pictured) that are dependent on an artificial amino acid.

Critics of genetic engineering have long worried about the risk of modified organisms escaping into the environment. A biological-containment strategy described this week in Nature1, 2 has the potential to put some of those fears to rest and to pave the way for greater use of engineered organisms in areas such as agriculture, medicine and environmental clean-up.

Two US teams have produced genetically modified (GM) bacteria that depend on a protein building block — an amino acid — that does not occur in nature. The bacteria thrive in the laboratory, growing robustly as long as the unnatural amino acid is included in their diet. But several experiments involving 100 billion or more cells and lasting up to 20 days did not reveal a single microbe capable of surviving in the absence of the artificial supplement.

“Our strains, to the extent that we can test them, won’t escape,” says Dan Mandell, a synthetic biologist at Harvard Medical School in Boston, Massachusetts, and an author on one of the two studies describing the strategy.

The microbes also do not swap their engineered DNA with natural counterparts because they no longer speak life’s shared biochemical language. “Establishing safety and security from the get-go will really enable broad and open use of engineered organisms,” says Farren Isaacs, a synthetic biologist at Yale University in New Haven, Connecticut, who led the other study.

Biocontainment could provide added safety in the biological production of drugs or fuels, where microbes can be kept separate from their surroundings. But the modified bacteria could also permit controlled release into the human body or the environment. “Containment might no longer be of the physical kind,” says Tom Ellis, a synthetic biologist at Imperial College London who was not involved in the research.

The new technique originated in the laboratory of George Church, a geneticist at Harvard Medical School. Two years ago, Church and his team (which included Isaacs) reported the synthesis of a strain of Escherichia coli that had a reprogrammed genetic code3. Instead of recognizing a particular DNA triplet known as the amber stop codon as an order to terminate protein synthesis, the recoded bacterium read the same instruction as a directive to incorporate a new kind of amino acid into its proteins.

Church and Isaacs have independently made this engineered microbe reliant on unnatural amino acids. The Isaacs team used genomic sequencing to identify sites in essential bacterial proteins where the microbes could incorporate synthetic amino acids without affecting overall function, whereas Church’s group started with the protein structures and added elements to help integrate and accommodate the artificial amino acids.

“This is really the culmination of a decade of work,” says Church.

These organisms are also more resistant to viruses than their natural counter­parts because of the mismatch between the genetic code of the virus and that of its host3. Looking ahead, Church and his team are working to co-opt seven different codons, instead of just one. “That would be more than enough to be resistant to all viruses and to create a lot of opportunity for safety,” Church says.

Isaacs has also developed a different safeguarding system, in which E. coli can grow only in environments containing synthetic chemicals needed for gene expression. He described the work this month in Nucleic Acids Research4. Another research team led by Jef Boeke at the New York University Langone Medical Center and Patrick Yizhi Cai at the University of Edinburgh, UK, has been working on a similar strategy in yeast. Commonly used in industry and biotechnology, yeast has its genetic mater­ial packaged in chromosomes similarly to animals and plants rather than bacteria.

“That’s a strategy that is going to be more easily adaptable to other organisms beyond E. coli,” says Isaacs. His team is now engineering a bacterium that is dependent on synthetic chemicals as well as on artificial protein building blocks. “I think ultimate solutions for robust biocontainment will involve multiple approaches that are deployed at the same time in a single organism,” he says.

Such a beast will present a real challenge for regulators, says Todd Kuiken, senior research associate for the Science and Technology Innovation Program at the Woodrow Wilson International Center for Scholars in Washington DC. “What we’re now starting to talk about is a really, completely synthetic organism,” Kuiken says. “How do you evaluate that once you put it out into the field?”