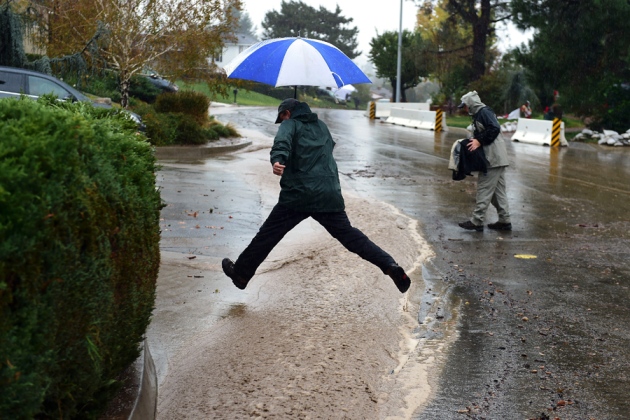 Rainfall, such as this downpour in Glendora, California, is likely to rise along with global temperatures.

Get ready for rain: climate change is already driving an increase in extremes of rainfall and snowfall across most of the globe, even in arid regions. And this trend will continue as the world warms, researchers report today in Nature Climate Change.

The role of global warming in unusually large rainfall events in countries from the United Kingdom to China has been hotly debated. But the latest study shows that climate change is driving an overall increase in rainfall extremes1.

“In both wet and dry regions, we see these significant and robust increases in heavy precipitation,” says Markus Donat, a climate scientist at the University of New South Wales in Sydney, who is the study’s lead author.

Warm air holds more moisture, and previous research has found that global warming is already increasing the odds of extreme precipitation events. But climate models typically differ as to how that might play out at regional scales. Some models suggest that dry areas could become drier, but the new findings confirm that this rule does not hold over land; some areas see declines, but most get wetter.

“The paper is convincing and provides some useful insights,” says Sonia Seneviratne, a climate scientist at the Swiss Federal Institute of Technology in Zurich. “What is particularly new in this article is the demonstration of such a signal for observed changes in dry regions.”

Donat and his team defined as ‘extreme precipitation’ as the maximum rainfall or snowfall seen in a single day and collected data on this from some 11,000 weather stations from 1951 to 2010. The team identified areas that were wetter and drier than the global average, and then tracked changes in daily precipitation events as well as cumulative annual precipitation in those areas.

“In both wet and dry regions, we see these significant and robust increases in heavy precipitation”

The team then compared the observations to climate simulations that were developed for the Intergovernmental Panel on Climate Change’s fifth assessment report. Global climate models have a hard time simulating extremes, and at the local and regional scale they often tell different stories, Donat says. To address this problem and identify consistent precipitation patterns, the team focused on how wet and dry areas change within each individual model as the climate warms. Although the models might differ from one another as to how and where rain and snow falls, each exhibited the same trends within its own simulated climate: as temperatures rise, extremes of precipitation increase in both the wettest and driest regions.

“We have a really good agreement between the observations and the models,” Donat says.

The results align with a 2015 study by researchers at the Potsdam Institute for Climate Impact Research (PIK) in Germany, which found that global warming has boosted the number of record-breaking rainfall events2. That approach provides more geographical detail about where major changes are happening, whereas Donat and his colleagues average their trends across wet and dry regions, says Jascha Lehmann, a doctoral candidate and analyst at PIK, who was lead author of the 2015 study. “Both approaches have their pros and cons and should be used to assess and understand changes in rainfall extremes,” he says.

Dim Coumou, an extreme-weather researcher at PIK and a co-author of the 2015 study, adds, "The scientific community is coming to a consensus that extreme rainfall (on daily timescales) is increasing in frequency over most land areas."

These studies bolster predictions from models that more extreme weather is on the way, while confirming that even arid regions that may not be accustomed to heavy precipitation could be affected. The study may not offer any details about what kind of events to prepare for, but it does put governments on alert, Donat says. “It is probably a good idea to invest in infrastructure that helps in dealing with heavier precipitation, in particular if you are not yet used to those events.”