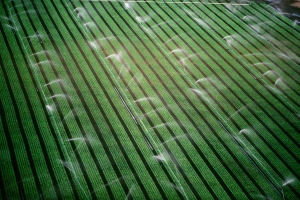 Improved irrigation and more intelligent use of fertilizers could increase agricultural production by as much as 70%.

With 9 billion people expected to be alive in 2050, researchers are running out of time to develop new ways to feed them sustainably.

But an analysis published today in Nature1 suggests that strategies already exist that could shrink the ‘yield gap’ — which they define as the difference between attainable and actual yields of food crops. Assembling the most comprehensive global data set of crop yields and fertilizer use yet produced, the study authors show that yield increases of 45–70% are possible for most crops through improved nutrient management and increased use of irrigation.

“Our study can help diagnose successful interventions — and prioritize our efforts — to close yield gaps at the regional and global scale,” says Nathaniel Mueller at the University of Minnesota in St Paul. “We know, for example, that eastern Europe is underperforming, but knowing which regions or crops need additional inputs can be extremely useful.”

To tease out trends in global crop yields on a regional scale, the authors took a statistical approach — combining existing national and sub-national data for both crop yield and fertilizer input. They divided the world into areas of similar growing characteristics on the basis of climate, and then calculated attainable yield and the factors contributing to yield gaps for 17 major crops, including wheat, rice and maize. In this way, they were able to build models relating yield solely to inputs — and therefore to calculate what inputs were necessary to close yield gaps and to identify regions where yields could be maintained using reduced inputs.

For example, China could maintain yields while reducing fertilizer use, which would lower emissions of nitrous oxide, says lead author Jonathan Foley, director of the Institute on the Environment at the University of Minnesota. “Our study adds to growing evidence that we can increase food production and improve the environment — by doing nothing more than being smart.”

But Foley’s big-picture perspective does not sit easily with agriculturalists. “This is a refreshing look at yield gaps at a global level, but it is deeply flawed,” says Pedro Sanchez at Columbia University in New York city. Sanchez says that the study ignores the need to develop improved high-yielding crop varieties to close the gaps and wrongly assumes that the amount of fertilizer use in the highest-yielding regions will be required everywhere that a crop is grown.

“The authors did a tremendous job estimating nutrient applications for so many different crops, but I worry that using statistics of past performance as the basis to explore the future is dangerous because it misses important process-level information,” says Martin van Ittersum, an agricultural modeller at Wageningen University in the Netherlands. For example, the study failed to show a significant effect of soils — which can vary dramatically in pH and organic-matter content, factors that directly affect crop performance. "Every agronomist would be surprised to see that the effect of soils is averaged out using this method," he says. Van Ittersum and his colleagues are creating a 'Global Yield Gap Atlas' using simulation-based models to capture data on agronomic conditions, water usage and crop yield.

The study authors admit that they too were surprised that their model was insensitive to soils. “We are not saying that soils are unimportant; it’s just very difficult to find a single soil parameter that influences global crop yields,” says Foley, adding that robust global soil data are needed. Mueller says that the team's top-down statistical approach complements bottom-up, field-based agronomic research that cannot easily be scaled up to a regional or global level.

But sceptics are most critical of the study's suggestion that increased irrigation can close crop-yield gaps sustainably. Traditionally, strategies for closing yield gaps are specific to either irrigated systems or those that receive adequate water from rain; converting a rain-supplied system to an irrigated system is not easily accomplished because of the hefty investment required, says Tony Fischer, an agricultural scientist at the Commonwealth Science and Industrial Research Organisation in Canberra, Australia. Not to mention that agriculture is responsible for 70% of Earth’s freshwater use. “The question is whether there is even enough water available to irrigate,” adds van Ittersum.

Mueller and Foley plan to tackle the trade-offs associated with increasing irrigation next. “We need to find ways to take the pressure off water-sensitive regions by perhaps intensifying agriculture elsewhere,” says Foley.