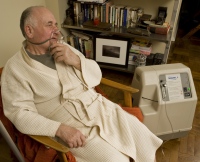 On average, people are living longer lives — but this means they tend to experience more years of disabilty.

People around the world are generally living much longer than before — but many of those extra years are blighted by disability, according to the latest estimates of the global burden of disease, debilitating disorders and injuries.

The estimates, a major revision of a 1990 assessment, were published in The Lancet last week by an international collaboration involving 486 scientists from 302 institutions in 50 countries. The project was led by the Institute for Health Metrics and Evaluation at the University of Washington in Seattle (see go.nature.com/iem2sh).

In the 1970s, people in many developing countries could often hope to live only until their forties or fifties. Now they can generally expect the longer lifetimes once enjoyed only by those in the richest countries. The big exception is countries in sub-Saharan Africa, which have made much less progress (see ‘A shifting picture of global health’).

Factors such as economic growth, better education and improved health technologies have driven the gains by reducing deaths from infectious diseases, malnutrition and maternal and child illness. As people live longer, non-communicable diseases such as heart disease and cancer, and risk factors such as obesity and high blood pressure, have become the major challenges facing health systems in much of the world.

The findings highlight another group of conditions, such as musculoskeletal ailments and mental illness — as well as injuries — that cause relatively fewer deaths but result in substantial disabilities. These conditions now deprive people of a similar number of years of healthy life to the classical killer non-communicable diseases. Living longer can be a net benefit for individuals, even if they are ill, but at the population level this translates into higher costs and major challenges for health-care systems.

Estimating the burden of death and illness remains an inexact science, however. This is mainly because of the lack of data — particularly from poorer countries that often do not have basic systems for certificating deaths and their causes — and wide disparities in the comparability and quality of data. Nonetheless, such estimates will undoubtedly help to shape health care, priorities for research and international aid, and funding allocations. Researchers and policy experts can thus be expected to pore over, debate and often contest the detailed findings in the coming months. 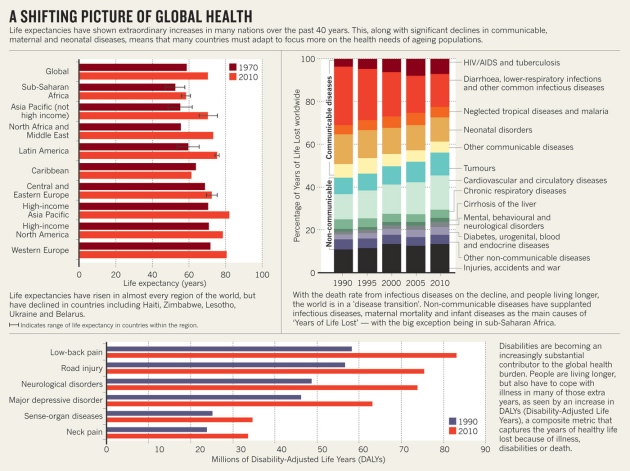