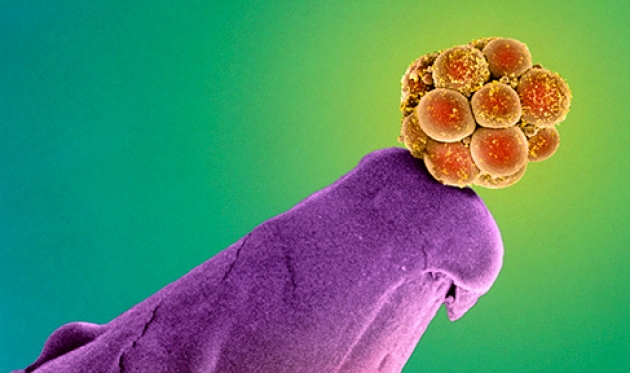 The genetic modification of human embryos (orange cells) is a controversial topic.

When nearly 500 scientists, ethicists, legal experts and advocacy groups from more than 20 countries came together in Washington DC last week to produce guidelines for the use of gene editing in humans, the meeting served as a potent reminder of how far genetic engineering has permeated society.

In 1975, a group of mostly US scientists met at an iconic conference in Asilomar, California, and set stringent guidelines for moving forward with powerful new research tools that enabled the mixing of DNA between species. Forty years later, it took a much more diverse group to reach a much less definitive agreement: a recommendation not to stop human-gene-editing research outright, but to refrain from research and applications that use modified human embryos to establish a pregnancy.

Held on 1–3 December, the International Summit on Human Gene Editing was organized by the US national academies of sciences and medicine, the Royal Society in London and the Chinese Academy of Sciences (CAS). The meeting highlighted China’s emerging prominence in genomics; much of the discussion surrounded an April publication by Chinese researchers who used the gene-editing technology CRISPR–Cas9 to modify a gene in non-viable human embryos (P. Liang et al. Protein Cell 6, 363–372; 2015).

A position statement released at the end of the meeting by its organizers did not condemn such experiments. But it said that a host of ethical and safety issues should be resolved before embryos are modified for clinical applications.

7 things everyone should know about genome editing

Many countries already limit research using human embryos. China explicitly bans the implantation of genetically modified embryos in a woman. Some countries ban gene editing of human embryos even in the lab. Nature’s editor-in-chief, Philip Campbell, said in a presentation that Nature journals have rejected papers on human germline editing because of “non-compliance with local regulations”.

Cultural differences are likely to perpetuate the diversity of regulations. Bioethicist Renzong Qiu of the Chinese Academy of Social Sciences noted that in the United States, a politically charged debate on whether embryos have human rights has resulted in laws that ban the use of public funds for research in which embryos are created or destroyed. This aspect is not even part of the discussion in China, he said: “According to Confucius, human being is only after birth.”

Ephrat Levy-Lahad, a cancer researcher at the Hebrew University of Jerusalem, said that Israel is likely to welcome clinical use of genetically modified embryos. The government, which encourages large families, already pays for parents using in vitro fertilization to screen their embryos for genetic mutations — a technique known as preimplantation genetic diagnosis, which is simpler than genome editing and can prevent many, but not all, inherited disorders.

The organizers of the Washington meeting reached not just across national borders, but also across disciplinary boundaries. Social scientists and ethicists raised concerns that altering human genomes could create inequality and discrimination: in the distant future, wealthy parents could choose their child’s skin colour, for instance. And sociologist Ruha Benjamin at Princeton University in New Jersey worries that the technology will create friction over which traits should be considered disorders — many deaf people, for example, do not think of themselves as disabled and want their children to share in deaf culture.

Jinghua Cao, deputy director-general of the CAS’s Bureau of International Cooperation, said that such preferences were new to him. “That is too far away from a normal way of looking at things in China,” he said. “It is good for us to learn that perspective; nevertheless, that goes too far.”

Despite differences about how far to go in applying gene editing to the unborn, nearly everyone at the meeting agreed that efforts to use gene editing after birth to correct defects in non-reproductive cells should continue. Qi Zhou, a developmental biologist at the CAS’s Institute of Zoology in Beijing, said that he was surprised to learn how quickly Western countries have moved the technology into the clinic. Trials of gene editing to treat leukaemia, HIV and haemophilia are planned or under way in the United States and the United Kingdom. No specific regulatory pathway for such treatments exists in China, Zhou said, and he plans to begin discussing this with the government as soon as possible.

For all the diversity at the meeting, the organizers acknowledge that it is only the first step. Many countries were not represented, and the agenda included few presentations by people with genetic disorders. When the mother of a child born with an inherited mutation took the microphone to describe tearfully how a genetic disorder had wracked her son’s body with seizures throughout his six-day life, her story generated a current of emotion not often encountered at a scientific gathering. “If you have the skills and the knowledge to fix these diseases,” she said, “then frickin’ do it.”