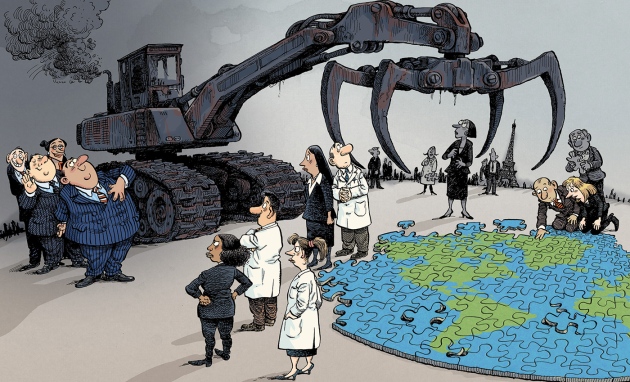 After years of failure to craft global agreements on climate change, the upcoming United Nations Paris Climate Conference is likely to turn a corner. Diplomats have drafted a workable text that will probably be adopted. Businesses and environmental groups are engaged in the process in unprecedented ways.

Governments, development banks and foundations are raising funds to help the poorest countries to pay for cutting emissions and prepare for a changing climate1 — the main sticking point in 2009, when the last big climate conference, in Copenhagen, ended in disarray. The UN and the French hosts have a sophisticated agenda to bring all these efforts together. Even religious leaders have spoken mightily of the dangers of unchecked climate change.

Good news from the Paris meetings will build confidence, a crucial ingredient for effective international cooperation. Governments and firms will invest in a future with lower emissions if they think that others will do the same2. Agreement will demonstrate the viability of a new, flexible 'bottom-up' mode for climate diplomacy — based on national pledges that accommodate different preferences and capabilities. By contrast, the rigid targets and timetables of the Kyoto Protocol appealed to few of the world's emitters.

Yet a dose of sobriety is also needed. Agreements are feasible now only because diplomats are postponing the thorniest problems, such as how to hold nations accountable. Business engagement may prove ephemeral when the spotlight shifts. Good news about climate finance is possible now because the blend of public funding (which is hard to mobilize and spend effectively) and private money (which is abundant but often rarely focused on global goals) is vague.

Whether the Paris conference will succeed depends on what unfolds afterwards. Diplomats will have much to do until 2020, when the main accords take full effect. Civil society — notably business — must shift from making bold promises to cutting emissions. Governments and business must build and invest in review and accountability mechanisms to ensure that they are keeping their promises — an area in which non-governmental organizations (NGOs) have a crucial role. And scientists must pursue research that is directly relevant to policymaking, as well as assessing the underlying causes and impacts of climate change.

Keeping business on board will be the most important challenge. It is easy for companies to make commitments when the world's media and political leaders are watching. It is harder to implement changes when cut-throat competition makes it risky to invest in more expensive but less polluting technologies and practices.

“It is easy for companies to make commitments when the world's media and political leaders are watching.”

The most striking example of business engagement is the pledges that many firms and governments are making to cut deforestation3. In 2010, the Consumer Goods Forum (comprising the largest retailers and consumer-products companies) announced that its members would eliminate deforestation from their supply chains, notably for palm oil, soya, beef, timber and pulp. More than 300 companies have followed suit (see www.supply-change.org). Leading producers and traders of palm oil in Indonesia — which accounts for half of the world's supply — have promised to stop converting forest or peat lands4. Palm oil is a main culprit in the fires that have spread a choking haze across the region since August, afflicting more than 40 million people and often causing daily emissions of greenhouse gases that surpass those of the United States.

It is far from assured that these pledges will result in lasting changes in the complex supply chains — from how the land is managed, to the produced oil and finally to consumer products. There are already signs of trouble. Most businesses pledge to become more sustainable following pressure from NGOs5. (One of us, J.P.L., led WWF International for nine years, during which time the organization was centrally involved in many such efforts.) Firms fear consumer backlash if their products are tied to environmental destruction6 (see go.nature.com/5l8yjm). After the Paris meetings, chief executives will need to activate changes through the ranks of their organizations and suppliers; NGOs will need both to maintain the pressure for action and to work with companies to secure broader reforms in major producing countries.

Shifting whole industries into more sustainable modes of production requires collaboration between government, business and civil society. Economic incentives must be rewired so that no firm can gain an advantage by, for example, continuing to destroy forest. Solutions will vary by country and locality, but common threads include better governance — laws, fiscal regimes, property rights and public administration — and investment in helping countries, communities and small producers to make the transition to sustainability.

Brazil has shown what is possible. Between 1995 and 2005, forest loss in the Brazilian Amazon averaged 19,500 square kilometres per year — roughly the area of Israel7. By 2013, that rate had been cut by 70%, even as beef and soya production continued to grow. A combination of measures was applied: corporate commitments coupled with strong laws, satellite surveillance and robust enforcement, restrictions on access to credit for farms and ranches in counties with high deforestation, the creation of protected areas and indigenous reserves, and improvements in land tenure and governance. Brazil's federal government worked closely with the beef and soya industries, NGOs and international partners. In 2008, for example, Norway committed US$1 billion to Brazil because it wanted to demonstrate practical new ways to protect forests globally. Even so, Brazil's progress is fragile — deforestation in the Amazon has increased over the past 18 months.

Beyond forestry, industry's commitment to reducing emissions is mixed. The three dozen firms and governments that account for 40% of the methane released from oil and gas production have pledged to eliminate those emissions by 2030, for example (see go.nature.com/beuw2z). Details on how this pledge will be monitored are scarce, as is a plan to extend the pledge to the rest of the global industry.

Business is, mostly, still waiting to see whether the Paris conference will turn out to be a watershed. Governments are looking for signs that industry can cut emissions at acceptable cost and are sceptical that competing nations will take action. For all the good will in Paris, this chicken-or-egg problem looms large — it explains why climate policy requires international cooperation, and why so little progress has been made over the past 25 years. Governments must grapple with huge unknowns about what mitigation will cost and whether other countries will honour their commitments8. Until confidence in international cooperation grows, politicians and business leaders will talk big but deliver small2.

Optimism about Paris is partly rooted in a new bottom-up bargaining system whose flexibility, in theory, is suited to crafting policy in areas in which cooperation is essential but countries are unsure about what is feasible2, 8. National pledges — in diplomatic jargon, 'intended nationally determined contributions' (INDCs) — allow governments to align their commitments with national priorities. This approach has elicited firm commitments — notably from countries such as the United States, China and India, which are skittish about inflexible international legal commitments yet willing to do their part for the global whole. China's pledges, for example, will help to slow global warming while serving the country's pressing concerns about reducing air pollution and achieving energy security.

Pledge systems also bring dangers. The current round of INDCs is thin on content; some countries have failed to supply any reports, and industry has been largely absent from the process. Unless the pledging system is improved, it could become a licence to do nothing. This is why earlier schemes have yielded little practical action — as with the Asia-Pacific Partnership on Clean Development and Climate created in 2005 by then-US President George W. Bush after the United States refused to ratify the Kyoto Protocol. Pledges must offer enough detail and transparency for diplomats to link national efforts into more-ambitious, collective agreements in the future. A priority after Paris will be to develop stricter standards for national pledges as well as robust systems for review.

Only so much can be achieved within the UN system — in which consensus is usually required and it is easy for reluctant nations to block progress. Countries and firms will need to find ways to work in smaller, focused and more practical groups — in tandem with the broader global objectives8. Doing this cannot rest on altruism — it requires attention to self-interest and, as the palm-oil example shows, putting pressure on governments and firms to rethink their self-interest.

Countries that want this new flexible system to work should volunteer to do more — for example, by offering their INDCs for reform and review. The United States and China should offer their own bilateral climate accord, made in November last year — which pledged emissions curbs and efforts to conduct joint research on new technologies — to independent scrutiny, such as by the Organisation for Economic Cooperation and Development or the World Bank. With a huge stake in showing the effectiveness of the pledging process, these two countries must bear the burden of proof8.

Firms, too, must recognize that their efforts will be believed only with transparency and public accountability. Failure to demonstrate that corporate pledges are leading to tangible action will lead to demands after Paris for more onerous and costly regulation. Industry pledges should be reviewed alongside government commitments — and leading firms that have the most to gain from this new system of governance should invest in the needed independent reviews. NGOs have a key role in holding companies to account, assessing to what degree stated reductions are real (with no double counting) and identifying where extra effort is needed.

For academics, this world of bottom-up diplomacy demands new skills. Periodic global assessments of the state of the science and gaps between what governments and firms pledge and what the planet needs for protection will still be needed. Equally urgent is interdisciplinary research predicting how these messy, decentralized systems of governance will function. Scientists, including social scientists, will need to look, together, at how societies develop and implement policy reforms while assessing what works so that research is more informative for policymakers.

Sceptics will see that messy reality on display at the Paris conference and declare that the event has failed to deliver on widely discussed goals such as stopping warming at 2 °C above preindustrial levels. The better metric is whether Paris engages a growing share of industry and governments in the climate task. When the meetings in Paris are done, the real business of decarbonization must begin.