A technique that combines two novel forms of renewable energy — one relying on bacteria and the other on salt water — generates more electricity than either one alone and cleans waste water at the same time. The work is published today in Science1.

Waste water contains a great deal of energy in the form of organic matter, says lead author Bruce Logan, director of the Hydrogen Energy Center and the Engineering Energy and Environment Institute at Pennsylvania State University in University Park. Domestic waste water contains nine times more chemical energy than the energy required to treat it — that amount, added to the energy in waste water from livestock and food production, would be nearly enough energy to maintain the entire US water infrastructure, he says. 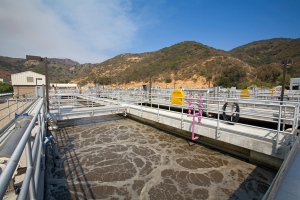 Sewage could become a useful source of energy, by combining two existing technologies.

One method for converting this energy to a useable form is to use microbial fuel cells (MFC). These generate electricity by using cultures of microorganisms to break down and oxidize organic matter, a process that releases electrons that migrate towards a positive electrode. At the same time, hydrogen ions from the water pass through a proton-exchange membrane and into a separate cathode chamber. The electrons are drawn to the cathode from the anode via a circuit, generating an electrical current, where they combine with the hydrogen ions and ambient oxygen to form clean water.

MFC technology is almost ready for commercialization, but the power densities — that is, the amount of power each system generates per square metre of cathode surface area — could be higher, says Logan. To boost the power density of the MFC system, Logan and his colleagues added to it a second process, called reverse electrodialysis (RED), in which the salinity gradient between fresh water and sea water is harnessed to generate electricity.

Normally with RED, water from the two sources is pumped across pairs of membranes that let only positively or negatively charged ions pass through. “These get all the negative charges going one way and all the positives going the other,” says Logan. The membranes are connected to oppositely charged electrodes so that, as the ions migrate towards their respective electrodes, an electrical current is generated. But the need for many pairs of membranes pushes up the cost, says Logan.

The researchers’ system, called a microbial reverse-electrodialysis cell (MRC), sandwiches a RED stack made up of only a few pairs of membranes between the two chambers of an MFC, where the proton-exchange membrane would normally be. The fluids from the two systems are kept separate, operating independently but working together to boost the power density — the stacks increase the current of the MFC while the voltage between the MFC’s electrodes enables the RED stack to operate with fewer pairs of membranes.

A crucial part of making this work is the use of an ammonium bicarbonate solution in the RED stack instead of sea water. This raises the power density, and the ammonium bicarbonate can be regenerated within the stack, making the RED stack a closed system. The team shows that this configuration can achieve maximum power densities of 3 watts per metre squared, much higher than either technology can achieve on its own.

Such a system would be capable of producing 0.94 kilowatt-hours of electrical energy per kilogram of organic waste, says Logan — conventional treatment of waste water, by constrast, typically consumes around 1.2 kilowatt-hours per kilogram. “We are not only getting more power and more voltage, we are also cleaning the waste water faster and better,” Logan says.

The use of ammonium bicarbonate should boost efficiency, says Liwei Lin, co-director of the Berkeley Sensor and Actuator Center at the University of California. However, one drawback is that, even though the two fluid systems are kept separate, there is evidence of some nitrogen crossover from the stack into the anode chamber of the MFC, he says, which could deplete ammonium bicarbonate supplies. He would also like to see long-term testing to ensure that fouling doesn’t build up on the membranes over several months and clog up the RED stack.

These problems are easily overcome, says Logan. The use of the ammonium bicarbonate solutions avoids fouling on everything except the membrane adjacent to the bacterial chamber he says, and “we don’t know how much of that will be an issue in the long run”. And nitrogen crossover could be addressed by having lower ionic concentrations in the membrane stack nearest the anode or through the use of bipolar membranes which only allow ions to pass through in one direction to prevent nitrogen species leaking back into the anode chamber.