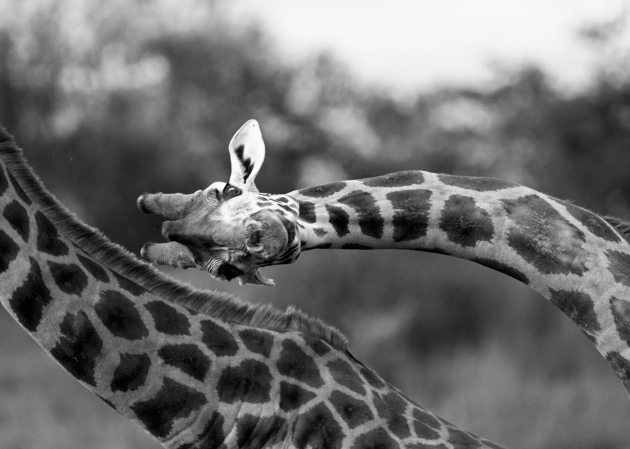 Giraffes might have evolved their long necks to keep cool.

How did the giraffe get its long neck? The obvious answer — and some of you are probably shouting it at the page or screen right now — is that it evolved as a benefit that allowed the animals to reach and eat higher leaves. Perhaps. Probably, even. That was certainly Charles Darwin’s explanation. But it’s not certain, and other possible origins for one of the animal kingdom’s most distinctive features are still a topic of debate among zoologists and evolutionary biologists alike.

One such idea is reported in the Journal of Arid Environments (G. Mitchell et al. J. Arid Environ. 145, 35–42; 2017). Long-necked giraffes, scientists argue, can point their heads and necks towards the Sun, exposing less of their skin and making it easier for them to keep cool and survive the hot, dry conditions they often endure.

Improved thermoregulation is one of the later evolutionary explanations offered for the giraffe’s long neck — a debate that goes back to before the time of Darwin. The French naturalist Jean-Baptiste Lamarck suggested that giraffes’ necks became stretched as they constantly reached for foliage (an idea very much ahead of its time but for which he is sometimes unfairly ridiculed). Darwin and his contemporary Alfred Russel Wallace then famously turned this Lamarckism on its head, pointing out that the long neck would have come first, and this would have handed the taller individuals a significant advantage over shorter giraffes.

That idea stood largely unchallenged until, in a letter to this journal in 1949, Chapman Pincher took issue and pointed out that the legs of a giraffe are also unusually long (all the better for a swift escape from predators) (C. Pincher Nature 164, 29–30; 1949). The long neck, he said, must therefore have evolved as a way for the animal to be able to reach past its own legs when it leans to reach the ground to take a drink of water. (Never very popular, Pincher’s suggestion lasted only as long as it took scientists to find and examine fossil ancestors of the giraffe, and point out that those animals had managed perfectly well with long legs and short necks for millions of years.)

Other, more credible, alternatives to the dominant ‘competing browsers’ idea have emerged. One of the most popular is that long necks help male giraffes use their heads to bash rivals, or that females prefer them. Both would suggest that long-necked males are sexually selected.

And then there is thermoregulation. Originally, the suggestion was that long necks (and legs) significantly tilted the balance between volume and surface area that determines how quickly animals (and other bodies) gain and lose heat. Giraffes might look as if they have a larger than usual surface area compared with barrel shaped rhinos, elephants and others — but do they? It turns out that few people have tried to measure the surface area of enough giraffes to be sure. That’s what the scientists do in the latest study.

They looked at measurements made for dozens of giraffes culled in Zimbabwe. They found that, pound for pound, the surface area of a giraffe is actually no larger than would be expected for any other animal of the same mass. And the creatures are no better at keeping cool, until, the scientists go on to suggest, they turn to face the Sun — as many giraffes are seen to do on hot days.