From the shoreline of an ancient Martian ocean (top), tsunamis may have washed ashore two separate times, leaving behind piles of rocks and debris (brown, bottom images).

Some 3.4 billion years ago, giant meteoroids slammed into a frigid ocean covering Mars's northern hemisphere. The impacts kicked up enormous waves that raced across the water and swamped the shoreline, research suggests.

On the scale of planetary catastrophes, such tsunamis would have dwarfed most Earthly ones. “Imagine this enormous red wave coming towards you, up to 120 metres high,” says Alexis Rodriguez, a Mars researcher at the Planetary Science Institute in Tucson, Arizona. “It would have been pretty spectacular.”

Rodriguez and his colleagues mapped traces of two of these tsunamis. They describe the findings in Scientific Reports1.

If the idea stands up to further scrutiny, it may help resolve longstanding arguments about whether Mars had an ancient northern ocean. As evidence, some scientists point to what they call the remains of a shoreline, like a bathtub ring left behind when the water drained away. But the purported shoreline isn’t visible everywhere that it should be.

Mega-tsunamis could have wiped away some of that shoreline, happening as often as every 3 million years or so, Rodriguez says.

Researchers have previously suggested tsunamis on Mars. A 2010 study2 calculated that high-energy waves should have left an imprint on the proposed Martian shoreline. A 2014 paper3 simulated how fast and how tall such waves might have moved — up to 20 metres a second as they rushed outward from the impact site, and up to 120 metres high when they reached the shore.

Rodriguez began thinking about Martian tsunamis after visiting the eastern coast of Japan in 2011, which had been devastated by a tsunami generated by a magnitude-9 earthquake. His team grew to include some top Martian geology experts.

The group zeroed in on a region on Mars where the highlands known as Arabia Terra bump up against the lowlands of Chryse Planitia — a place where the waters of an ancient ocean might have lapped at the shoreline. Using imagery from several Mars-orbiting spacecraft, Rodriguez’s group identified two particular geological formations that they say formed during two different tsunamis. 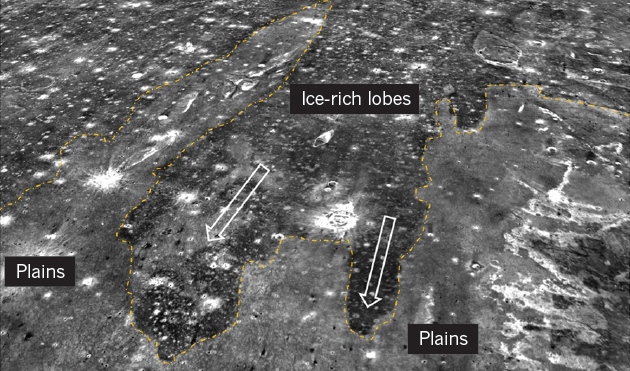 A 250-kilometre- long lobe of dark material might be the remnants of a tsunami that hit when Mars’ climate was cold enough to freeze the water into an ice-rich slush that crept across the landscape.

The first, older formation looks as if an enormous wave had rushed up onto the edge of the highlands, dropping boulders as big as 10 metres across. The water then drained back down into the ocean, leaving channels cut through the freshly deposited debris.

Then, millions of years passed. Temperatures dropped and glaciers crept across the landscape, scouring deep valleys. Finally, a second impact-generated tsunami came rushing again towards the shore. “But this time it is different,” Rodriguez says.

Because the climate was so much colder, the tsunami moved over the landscape like an icy slurry. It froze before it had a chance to wash back into the ocean, leaving dense lobes of frozen debris on the ground.

The new study is consistent with earlier ideas about how these Martian features formed, says Timothy Parker, a planetary scientist at the Jet Propulsion Laboratory in Pasadena, California, who originally came up with the idea of a northern Martian ocean. In previous work4 he described the backwash channels as forming when big waves washed up on a beach and drained back down again. “Though I didn't specifically talk about tsunamis in my interpretations, the implication of scale was certainly there,” he says.

The icy-looking lobes are particularly exciting, says James Dohm, a planetary scientist at the University Museum of the University of Tokyo. Even as the ocean eventually froze out and died, the tsunami deposits remained untouched by wind or other types of erosion for more than 3 billion years. (Dohm adds that he would have liked to have witnessed the Mars tsunamis, preferably from a high ridge and without an astronaut helmet blocking his vision.)

Rodriguez is now looking for evidence of tsunamis in other parts of Mars, as well as analogues on Earth that could help him to understand them better. One area of interest is a group of small craters near the shoreline that could have been drenched by the tsunami, and then trapped that water for millions of years. Such isolated pockets of water could have been places for Martian life to evolve, if it ever existed, Rodriguez says.

This summer, he hopes to travel to Tibet to study high, cold mountain lakes that may give him a glimpse into those long-ago Martian craters.