Ahuna Mons (shown in the foreground) is thought to be much younger than Ceres itself.

A massive ice volcano towers over the surface of the dwarf planet Ceres, researchers report today in Science1.

Dubbed Ahuna Mons, the volcano stands 4 kilometres tall, roughly half the height of Mount Everest. Although scientists have spotted potential cryovolcanoes elsewhere in the Solar System — most notably on Pluto2 — the study’s authors say that their evidence is the strongest yet.

“This huge mountain was a surprise,” says lead author Ottaviano Ruesch, a planetary scientist at NASA’s Goddard Space Flight Center in Greenbelt, Maryland. ”We were expecting to see just fluid plains of lava.”

Ruesch and his colleagues based their analysis on  images and other observations collected by NASA’s Dawn spacecraft, which began orbiting Ceres in March 2015. Those data demonstrate that the dwarf planet is more than just a cratered ball of rock and ice: it seems to be geologically active, with processes other than crater-forming impacts shaping its surface.

The Dawn images, which have a resolution of 35 metres per pixel, reveal steep slopes covered in debris, and crags and pits on the summit of Ahuna Mons. The mound-like cryovolcano appears to be only a few hundred million years old, making it a relatively recent addition to 4.5-billion-year-old Ceres.

Ceres’s cryovolcano could be a frozen analogue to some volcanoes on Earth — its shape is consistent with that of a spreading volcanic dome such as Mount St Helens in Washington. Such volcanoes do not typically spew lava into the sky; instead, it oozes slowly to the surface, where it forms a dome. The researchers think that Ahuna Mons was formed by the same mechanism, but with slushy ice rather than molten rock.

Surface temperatures on the dwarf planet hover at −113 ºC. Such conditions would normally create ice that is hard as rock, but the authors think that the ice volcano contains chloride and other salts. These could lower the temperature at which water freezes and produce a briny, viscous cryomagma. (Salts may also be present on Ceres' surface, which could explain the mysterious bright spots seen in images from Dawn.) 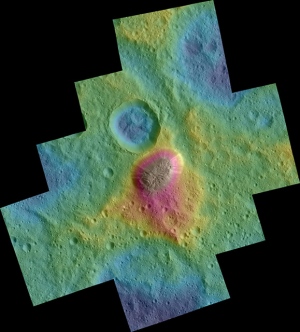 An overhead view of Ahuna Mons (shown in red).

Ahuna Mons' unusual domed shape suggests that material such as cryomagma came up from below, says Norbert Schörghofer, an astronomer at the University of Hawaii at Manoa. If that is so, a still-unknown heat source within Ceres must be helping to drive the volcanic activity.

“Ahuna Mons was not something we expected,” says Debra Buczkowski, a planetary geologist at Johns Hopkins University Applied Physics Laboratory in Laurel, Maryland, who is lead author of a Science paper on Ceres’s topography3, also published today. Buczkowki’s team describes craters criss-crossed with fractures that could be produced by cryomagma rising from within the dwarf planet — another possible indication of cryovolcanism.

But not everyone is convinced that Ceres boasts an ice volcano. Jeffrey Moore, a planetary scientist at NASA Ames Research Center in Moffett Field, California, notes that the smooth area around Ahuna Mons’s dome could be a relic of the impact that created an adjacent crater. That event could have melted nearby surface rock.

“The mound remains the most enigmatic feature on Ceres,” Moore says.

With Dawn still in orbit around Ceres, researchers will continue to study the complex geology that underlies Ahuna Mons. “It’s not active yet,” Ruesch says. “But we want to make sure. Nature is always so unexpected.”