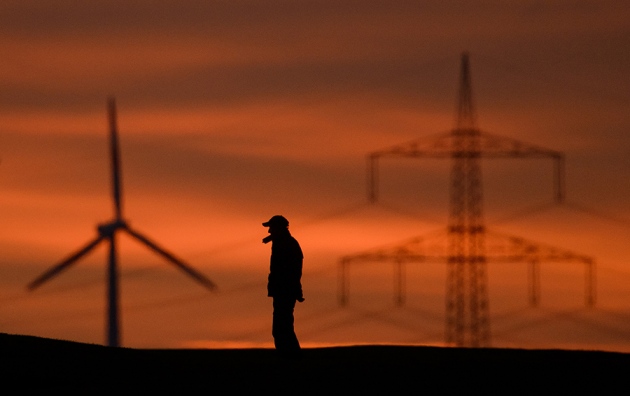 Renewable power sources such as wind now provide about one-third of Germany’s electricity.

The rows of towering wind turbines and legions of glistening solar panels spread across Germany’s landscape are striking emblems of the country’s shift to non-nuclear, low-carbon power. But although Germany is the world’s poster child for renewable energy, its grids cannot yet cope with the erratic nature of wind and solar power.

“To operate the grid more efficiently and keep fossil reserves at a minimum, operators need to have a better idea of how much wind and solar power to expect at any given time,” says Malte Siefert, a physicist at the Fraunhofer Institute for Wind Energy and Energy System Technology in Kassel, Germany, and a leader on the project, called EWeLiNE.

At about 45,000 megawatts, Germany’s wind-power capacity is the third largest in the world, behind China’s and the United States’. And Germany is outperformed only by China in solar capacity. But the pace of the country’s switch to renewables and its ambitions are unrivalled. Renewables now provide about one-third of domestic electricity and the government has promised that by 2050, at least 80% of the country’s electricity will come from renewables.

The trouble is that on calm and cloudy days, grid operators still need to call on conventional power stations to meet expected demand. And on unusually sunny and windy days — such as on 8 May, when for about 4 hours wind and solar power generated more than 90% of the electricity that Germany consumed — they must swiftly order coal and gas-fired power stations to reduce their output lest an influx of power ‘congests’ the grid and increases the risk of failures. 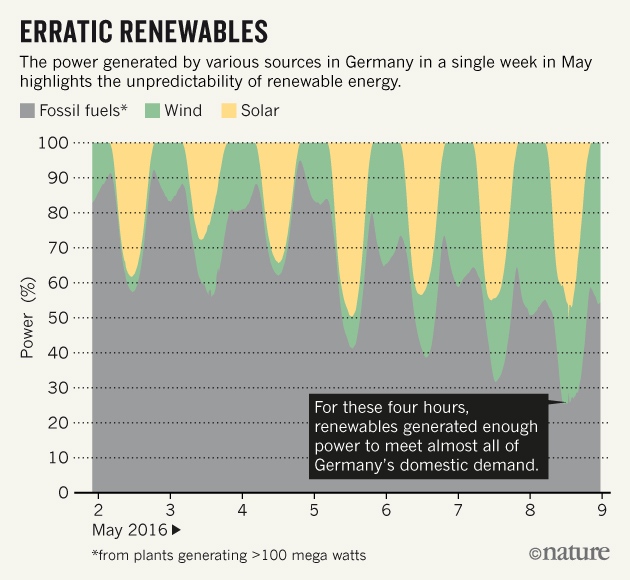 Such requests, called re-dispatches, cost German customers more than €500 million (US$553 million) a year because grid operators must compensate utility firms for adjustments to their inputs. They can also lead to needless carbon dioxide emissions if grid operators generate extra power that ends up being wasted. “It is quite a concern that renewable energy here is expanding so fast without a proper database for accurate power forecast,” says Renate Hagedorn, a meteorologist with the German weather service in Offenbach.

Eye of the storm

Standard weather models predict the strength and arrival times of storms and weather fronts in a given region. But they cannot, for example, predict wind strength at the hub of a turbine, which determines the amount of power the turbine will produce. The €7-million EWeLiNE project, a collaboration that includes three major grid operators — 50Hertz, Amprion and TenneT — and that is funded by the federal ministry for economic affairs and energy, set out in 2012 to provide load forecasts that are specific to the needs of grid operators.

Most wind turbines are equipped with devices that measure the wind speeds at their hubs, and some solar panels contain sensors for sunlight intensity. EWeLiNE combines these data with other atmospheric observations — from ground-based weather stations, radar and satellites — and sophisticated computer models predict power generation over the next 48 hours or so. The team checks these power forecasts against what actually materializes, and machine learning then improves the predictive models.

The EWeLiNE researchers began testing their system using solar-panel and wind-turbine data from across Germany last month. Eventually, the idea is for grid operators to use the power forecast to guide these requests. But very few wind and solar facilities are set up to transmit the data in real time, so the results cannot yet be used to adjust how much power is produced. In two years, EWeLiNE plans to have real-time transmission capabilities for most of the wind and solar facilities in Germany.

There are signs that the approach will work. The National Center for Atmospheric Research (NCAR) in Boulder, Colorado, started on a similar system in 2009, and it is is now operational in eight US states. At Xcel Energy, the utility firm with the highest total wind capacity in the United States, the number of forecasting errors has dropped since 2009, saving customers some US$60 million and reducing annual CO2 emissions from fossil-reserve power generation by more than a quarter of a million tonnes per year, says Drake Bartlett, a renewable-energy analyst with the firm who is based in Denver, Colorado.

“Germany has some very good modellers who are already doing a nice job without the real-time data that we have,” says Sue Haupt, who oversees weather-system research at NCAR. “Once they get access to that data I am sure it’ll be used to great effect.”

EWeLiNE cannnot simply use the NCAR system because weather models and the algorithms that convert weather predictions into power forecasts differ between the United States and Germany.