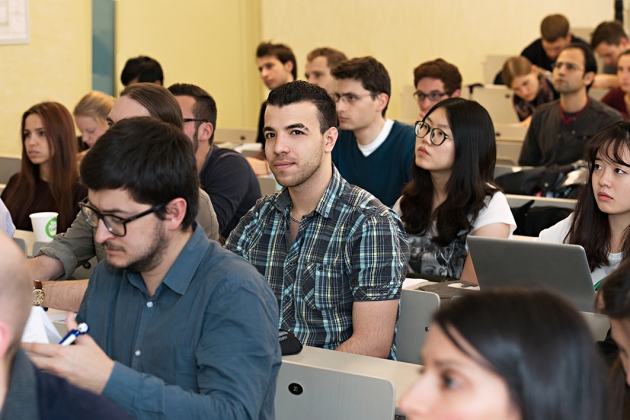 Mohammad Khamis (centre), who left Syria in 2013, is now attending the Technical University of Munich.

After civil war broke out in Syria, Mohammad Khamis lost his parents and his home — but not his dream of becoming a scientist. In July 2013, he boarded a flight from Damascus, where he had studied electrical engineering, to Egypt. In Alexandria, he paid traffickers about €5,000 (US$5,500) for a boat passage to Europe. The 9-day voyage to the Italian island of Lampedusa, on an unseaworthy sloop with 100 other desperate refugees, was a nightmare of fear, vomit and thirst.

Two years later, Khamis, now 22, is attending classes in maths, physics and chemistry at the Technical University of Munich (TUM) in Germany, where he sought asylum in August 2013 and was last year accepted as a war refugee. “There is no future for me in Syria,” he says on a cold December day in Munich. “I would like to stay here to study and find a good research job. My dream is to discover something new.”

Social scientists studying the flow of refugees into Germany want to discover something themselves: how many of the incoming people are, like Khamis, well-qualified, motivated and eager to learn — a boon for the economy. These migration researchers say that Germany has become a case study in the difficulties of suddenly integrating a large group of culturally diverse foreigners into a society; the nation has registered nearly one million asylum-seekers this year, more than half of them from Syria. It is the highest such influx in Western Europe.

After a short-lived wave of hospitality in September, when chancellor Angela Merkel promised that Germany would be a welcoming host to the persecuted, many citizens and some right-leaning politicians have begun to voice concerns, painting a picture of a Muslim-dominated parallel society of poorly trained recipients of social welfare.

Research may be able to counter the rising tide of xenophobia and aid the urgent process of resettling refugees by revealing more about migrants’ skills and cultural values, says David Schiefer, a Berlin-based psychologist with a German advisory body on migration and integration who is planning interviews with refugees. “We need to give these people a voice,” he says.

With about half of the newcomers under 25 years of age, Germany’s higher-education and science systems have a particular obligation — and the well-funded capacity — to help, say researchers. “Science has a responsibility to help tackle the huge integration challenge ahead,” says Alexander Kurz, head of human resources at the Fraunhofer Society in Munich, which runs centres for applied research. “There is great readiness among our staff of 25,000 scientists from 100 nations to provide mentorship and practical help.” 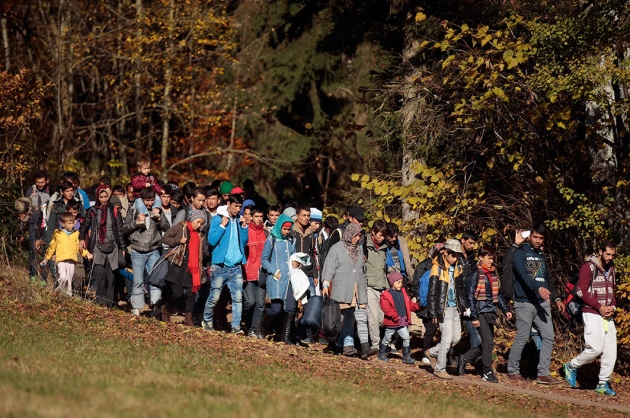 Migrants arrive in Germany, which has registered nearly one million asylum-seekers this year.

Reliable data on refugees’ qualifications and backgrounds are lacking. “We’re poking around in the fog,” says Ludger Wößmann, a director of the Ifo Center for the Economics of Education in Munich. International assessments of 15-year-olds suggest that up to two-thirds of Syrian refugee students might lack basic reading, writing and maths skills, he says. German industrial groups say that the large majority of migrants have minimal skills and poor language abilities, making them hardly employable.

But these assumptions are ill-informed, says Steven Vertovec, director of the Max Planck Institute for the Study of Religious and Ethnic Diversity in Göttingen. In fact, the newcomers are probably as diverse as German society at large, he says. “There are many highly educated, secularized people among the Syrians, Iraqis and Afghans who are seeking asylum here.”

Vertovec is leading a study in Lower Saxony in northern Germany that aims to interview asylum-seekers to examine their needs and aspirations, as well as to uncover best practices for responding to refugees. The goal is to produce practical guidelines for city workers and volunteer social workers in asylum-seeker camps on how to work with groups of migrants who may differ enormously in age, religion, language and education status. “Successful integration requires a nuanced understanding of migrants’ backgrounds and values,” he says.

Students such as Khamis (who officially has ‘guest’ status at TUM; he is not yet formally enrolled in Germany’s university system) are not an uncommon sight in the country’s university lecture halls. TUM has about 100 guest students; across the country, there are a few thousand. To help universities to cope with the influx, the government in November approved an extra €100 million for student counselling, language training and stipends.

On 11 December, Germany’s main research-funding agency, the DFG, encouraged grant holders to consider hiring refugee scientists in their research. DFG-funded scientists whose work would benefit from the participation of qualified academics or PhD students among the refugees are free to submit supplemental proposals for ‘guest funding’, said DFG president Peter Strohschneider.

“Science has a responsibility to help tackle the huge integration challenge ahead.”

In a strategy paper seen by Nature, a group from seven Max Planck institutes, in response to a call for research ideas by the society’s president, Martin Stratmann, has outlined a variety of research needs around humanitarian migration, from international law and human-rights issues to health and gender studies.

Marie-Claire Foblets, director of the Max Planck Institute for Social Anthropology in Halle, plans to ask a culturally diverse group of refugees — including guest students at the University of Halle-Wittenberg — for accounts of their lives and experiences. Other questions, such as those concerning refugees’ citizenship and civil rights, the potential lure of extremism, and the fate of children who might be staying with radicalized parents, will require the involvement of law experts, criminologists, educators and others, she says.

Khamis, for one, is happy to write up the story of his life for research. Having passed German-language tests, he hopes to enrol at the university next term as a regular student. “Germany has been good to me,” he says. “Now that my life can start again I do hope that I can give something back.”