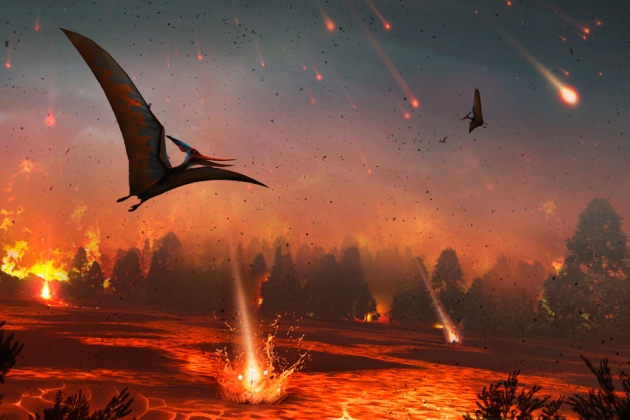 The asteroid that created Chicxulub crater reshaped life on Earth.

Geophysicists are returning to Earth’s most famous cosmic bullseye. Around 7 April, from a drill-ship off the coast of Yucatán, Mexico, they will start to penetrate the 200-kilometre-wide Chicxulub crater, which formed 66 million years ago when an enormous asteroid smashed into the planet. The aftermath of the impact obliterated most life on Earth, including the dinosaurs.

The expedition is the first to directly probe one of Chicxulub’s most striking features — its ‘peak ring’, a circle of mountains that rises within the crater floor. Scientists have yet to fully explain how peak rings form, even though they are common in big impact craters across the Solar System.

At Chicxulub, researchers will look for evidence to explain how a 14-kilometre-wide asteroid could have punched a hole that pushed rocks from the surface down some 20–30 kilometres. Flowing like liquid, the rocks then rebounded towards the sky — reaching as far as 10 kilometres above the original ground level — and finally splattered down to form a peak ring.

All of this happened in the span of several devastating minutes, says Joanna Morgan, a geophysicist at Imperial College London and the project’s co-chief scientist. “It’s astounding.”

If the 2-month expedition goes as planned, it will bore 1,500 metres into sea-floor rocks. The drill will first pass through carbonate rocks that make up the bottom of the Gulf of Mexico (see map), and eventually reach the fractured ‘impact breccias’ that represent the obliterating impact.

At least a dozen other boreholes and several oil-exploration wells have already penetrated the parts of Chicxulub that lie on land. They include a 1,511-metre-long core drilled near the crater rim in 2001–02 by a large international scientific consortium1. When combined with seismic surveys2, analyses of existing cores reveal a complex picture of nested rings of shattered rock, all created on a very bad day for life on Earth3.

The latest project will be the first to drill offshore at Chicxulub, and the first to target its peak ring. “We don’t really know what this material will look like,” says Jaime Urrutia-Fucugauchi, a geophysicist at the National Autonomous University of Mexico in Mexico City. “It could be a real surprise.”

The US$10-million project is funded primarily by the European Consortium for Ocean Research Drilling, and involves researchers from Europe, Mexico, the United States and elsewhere. The water at the drill site — about 30 kilometres offshore from the port of Progreso — is too shallow to accommodate conventional ocean-drilling vessels, so the project has hired LB Myrtle, a ‘lift boat’ that will drop three enormous pillars to the sea floor, then jack itself up to form a temporary drilling platform. 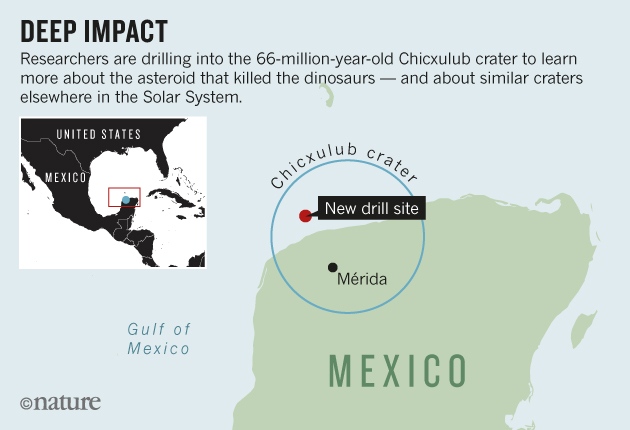 Chicxulub is the only impact crater on Earth both big enough and well-preserved enough to still have a peak ring. Finding out exactly how the rocks are layered in the core will help researchers to evaluate several competing models of peak-ring formation, says David Kring, a geologist at the Lunar and Planetary Institute in Houston, Texas. He and his colleagues studied the peak ring inside the lunar crater Schrödinger to predict what sorts of rock might exist in the Chicxulub core4.

Drillers will quickly bore their way through the top 500 metres of sediments, and then collect core samples more carefully as they go deeper. “At every level you’ll get a win,” says Sean Gulick, a geophysicist at the University of Texas at Austin and the expedition’s other co-chief scientist. At about 600 metres, the core will pass through rock from the Palaeocene–Eocene Thermal Maximum, when temperatures spiked about 55 million years ago, creating a greenhouse world. At 650 metres the core should hit the peak ring.

Perhaps the biggest question about the peak ring is where its rocks came from. If the rocks within the ring are relatively light in colour, they probably came from the topmost 5–10 kilometres of Earth’s crust. Darker rocks are likely to be rich in elements such as iron and magnesium, and probably came from greater depths — perhaps 10–15 kilometres down. Confirming the depth of the peak-ring rocks will help modellers to understand how the crust fractures and flows during a giant impact.

The core could also reveal whether the impact fostered life even while destroying it. When the asteroid shattered Earth’s crust, heat and water began flowing through the fragmented rocks. Microbes may have thrived in that warm, watery habitat, so microbiologists will test the cores for ancient DNA and other signatures of living organisms. “By looking directly at ground zero, we can watch life recover,” says Gulick.

From the drill rig, the cores will be sent to Bremen, Germany, for more detailed study later this year. Urrutia-Fucugauchi hopes that some of the most dramatic samples will eventually return to Mexico, perhaps to a new core laboratory at the Yucatán Science and Technology Park on the outskirts of Mérida.