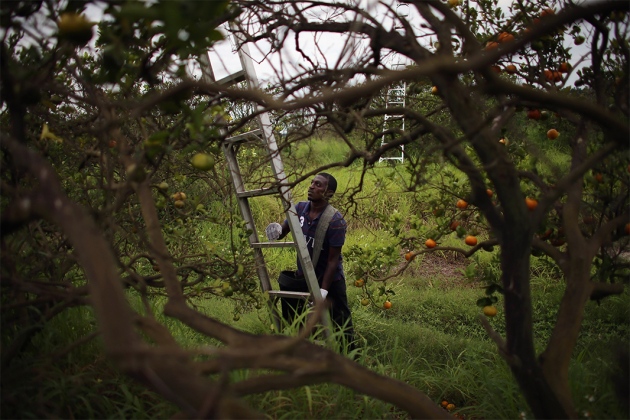 Tangerine groves in the southern United States are vulnerable to a disease known as citrus greening.

Fruit farmers in the United States have long feared the arrival of harmful citrus tristeza virus to their fields. But now, this devastating pathogen could be their best hope as they battle a much worse disease that is laying waste to citrus crops across the south of the country.

The agricultural company Southern Gardens Citrus in Clewiston, Florida, applied to the US Department of Agriculture (USDA) in February for permission to use an engineered version of the citrus tristeza virus (CTV) to attack the bacterium behind citrus greening. This disease has slashed US orange production in half over the past decade, and threatens to destroy the US$3.3-billion industry entirely.

The required public comment period on the application ended last week, and the USDA will now assess the possible environmental effects of the engineered virus.

Field trials of engineered CTV are already under way. If the request is approved, it would be the first time this approach has been used commercially. It could also provide an opportunity to sidestep the regulations and public stigma attached to genetically engineered crops.

“There’s a real race on right now to try to save the citrus,” says Carolyn Slupsky, a food scientist at the University of California, Davis. “This disease is everywhere, and it’s horrible.”

The engineered virus is just one option being explored to tackle citrus greening. Other projects aim to edit the genome of citrus trees using CRISPR–Cas9 to make them more resistant to the pest, or engineer trees to express defence genes or short RNA molecules that prevent disease transmission. Local growers have also helped to fund an international project that has sequenced citrus trees to hunt for more weapons against citrus greening.

“There are great scientific opportunities here,” says Bryce Falk, a plant pathologist at the University of California, Davis. “We need to take advantage of new technologies.”

The first tree in the United States with symptoms was reported in Miami in 2005. “We had the ‘uh-oh’ moment,” says Fred Gmitter, who breeds new citrus varieties at the University of Florida in Lake Alfred.

Some researchers have had accidental success against the disease. Gmitter’s team released a mandarin variety called Sugarbell just as the outbreak was getting under way. Although those trees have since become infected with C. Liberibacter, farmers are able to reap a reasonable crop of sweet oranges if the plants receive proper pruning and nutrition. But it is difficult to build on that success: why the trees are relatively tolerant of the disease remains a mystery.

For years, Southern Gardens Citrus has been genetically engineering plants to express genes taken from spinach that defend against the disease. The company says that the results of field trials suggest some degree of protection. But this approach will take many years to meet regulatory requirements for marketing a genetically modified crop. And consumers may not take kindly to a fruit or juice that comes from a genetically modified tree.

So Southern Gardens Citrus added a different approach, and began the USDA approval process for engineered CTV in February. Instead of modifying the trees, the company wants to alter the genome of a harmless strain of CTV so that it produces the spinach defence gene. The company intends to graft tree limbs infected with the virus onto trees. In April, the USDA announced it would start work on an environmental impact statement, a process that typically takes about two years and will be needed before the department allows the modified virus to be used commercially.

Because the virus does not alter the fruit, this approach may allow farmers to argue that the oranges are not genetically modified, and so avoid regulation and reduce public doubt.

That is also the goal of separate projects looking for genes that confer disease resistance when switched off. If researchers can find such genes, they could use CRISPR to inactivate them. Nian Wang, a plant pathologist also at the University of Florida, is using this approach to edit orange trees, and hopes to know by 2019 whether they are disease-resistant. Others are using RNA interference in psyllids to switch off genes that allow the insects to transmit the bacteria.

For now, one question dominates: whether the citrus industry will still be alive by the time these solutions make it to the groves. “It’s an incredibly devastating disease,” says Gmitter. “Growers needed answers ten years ago.”