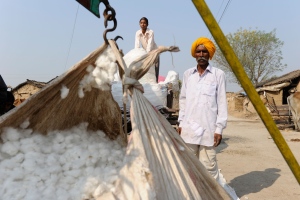 Smallholder farmers in central and southern India who planted genetically modified (GM) cotton achieve larger yields, greater profits and a higher living standard than those who grow conventional cotton, finds a study published today in the Proceedings of the National Academy of the Sciences1.

The study includes data collected from 533 farm households between 2002 and 2008. During that time period, almost all of the farms switched from conventional to Bt cotton, which contains genes from the bacterium Bacillus thuringiensis that make the plants resistant to the cotton bollworm caterpillar.

The analysis showed that the yield of plots planted with Bt cotton increased by 24% compared with conventional cotton plots. This translated to a 50% increase in profits, and during 2006–08, families that adopted Bt cotton spent 18% more money than conventional farming households, suggesting an increase in living standards. The benefits were due solely to reduced pest damage, say Matin Qaim, an agricultural economics researcher at the Georg-August University of Göttingen and Jonas Kathege, his PhD student.

“When you are going to farmers, and interviewing them and visiting them, and over time you could see the living standard had improved,” says Qaim. “Some had furnished their houses, and many of them were eating more.”

Bt cotton was officially approved for sale in India in 2002. Before that, a bollworm infestation could halve yields. Within a decade, Bt-cotton was adopted by nearly 7 million farmers, and they cover 97% of the area planted with the crop today. Yields have doubled, and insecticide use has halved.

But researchers have debated how much, if any, of the yield increase can be attributed to the Bt technology. Farmers who buy expensive GM seeds also start irrigating and applying fertilizer to protect their investments, so any observed increase may be due to better farming. The surveys also tend to sample wealthy, progressive farmers who can afford the seeds and who are skilled enough to get high yields regardless of technology.

Qaim says that his study has accounted for some of this bias by using a statistical model that controls for unobserved variables, such as better farming habits and skill levels, that can increase yield. This allowed the researchers to attribute the observed benefits to Bt, he says.

But farmer surveys may not always reflect the contribution of Bt to average cotton yields in India as a whole, warns Guillaume Gruere, a senior research fellow at the International Food Policy Research Institute in Washington DC.

“The study is based on the data you get so, even though these are original surveys, you don’t get into all the states and it won’t cover every situation,” says Gruere. “Just like in a political poll, there will be a margin of error.”

In India, cotton is grown in a variety of soil types, weather conditions and pest burdens, and what is true in southern and central India may not be true in the north. In fact, the benefit may not be consistent across all farmers in the states sampled.

This inconsistency is reflected in statistics collected by the Indian government. The largest yield ever recorded in Maharashtra, the largest cotton growing state in South and Central India, was an average of 1,065 kilograms of cotton per hectare in 2010, according to the Cotton Corporation of India. This is much lower than the highest individual yield reported in the latest study, which was 2,072 kilograms per hectare, says Keshav Raj Kranthi, director of the Central Institute of Cotton Research in Nagpur, India. Other reports using government statistics have also shown more modest increases in yield3.

The extent to which the Bt genes are responsible for any benefits is still in question, says Kranthi. But overall, Bt cotton seems to be advantageous for Indian farmers. “The Bt technology is brilliant,” he says. “You can’t imagine farmers will make a choice if there is no economic benefit.”