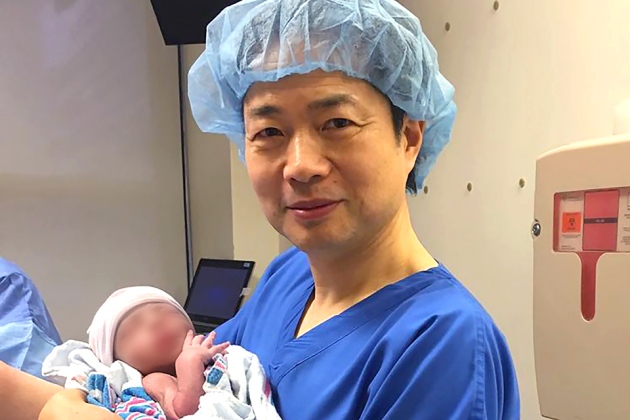 When a US fertility clinic revealed last year that it had created a baby boy using a controversial technique that mixes DNA from three people, scientists were quick to raise the alarm. Some objected on ethical grounds, and others questioned the scientific claims made by the clinic’s leader, physician John Zhang.

Now, after months of intense debate and speculation, Zhang’s team has provided more details about the child’s conception, in a paper published on 3 April in Reproductive Biomedicine Online1. But major questions remain about the long-term health of the boy, and whether the experiment will ultimately advance reproductive medicine.

Techniques to create ‘three-parent babies’ seek to offer mothers a way to have a child without passing on metabolic diseases caused by faulty mitochondria, the structures that provide energy to cells. Researchers do this by exchanging the diseased mitochondria of a prospective mother with those of a healthy, unrelated donor: the ’third parent’.

In this case, a team led by Zhang, who works at the New Hope Fertility Center in New York City, removed the nucleus from a healthy donor egg and replaced it with a nucleus taken from the egg cell of a woman who carries a rare neurological disease called Leigh syndrome, leaving the donor’s healthy mitochondria intact. The scientists then fertilized the modified egg with the father’s sperm before implanting it into the mother’s uterus. The resulting baby was born in April 2016.

The paper reports new details about the procedure, such as the method used to transfer the mitochondria: freezing and heating the embryo before using an electrical pulse to fuse the mother's nucleus into the donor egg. The study also reveals that some diseased DNA from the mother was carried over inadvertently into the donor egg, which could have long-term repercussions for the child's health.

Other scientists welcomed the new information. “Certainly, this is a landmark study,” says Dietrich Egli, a stem-cell scientist at the New York Stem Cell Foundation.

But the big question remaining is whether the child's health will be affected by the traces of the mother's mitochondrial DNA that he carries, which could prompt some of his mitochondria to function improperly. The percentage of affected mitochondria can differ between tissues. Zhang's paper reveals that just 2% of the mitochondrial DNA of cells in the boy’s urine came from the mother, but that figure rose as high as 9% in cells from the child’s circumcised foreskin. Organs such as the heart or brain are impossible to test without invasive surgery.

Scientists don't know what amount of diseased mitochondria would cause noticeable symptoms, or even disease, in a child created using genetic material from two women. But studies in mice have shown that mixtures of mitochondria can result in neurological disorders or metabolic conditions2.

It is not clear how these results will compare to the outcome of mitochondrial replacement in people. “Whatever we learn in a person will be completely new,” Egli says.

But the answers are not likely to come from the child born in Zhang's clinic. The study says that the baby’s parents have refused any further mitochondrial testing on the baby unless there is a medical need. It is not clear whether the family was ever asked to consent to long-term medical monitoring; Zhang and New Hope did not respond to Nature's request for comment on the matter.

The value of the experiment will be limited if scientists cannot track the boy as he grows, Egli says. “It looks like a rush to use this as a treatment and telling patients that this is the treatment, during a time when we still know very little about what the outcomes are.”

Government regulations and other guidelines for human research generally require that people be allowed to withdraw from experiments. When this happens, it can make it hard to determine whether a treatment is safe, says Alta Charo, a bioethicist at the University of Wisconsin–Madison. In this case, she says, it is unclear whether the parents received enough information to appreciate how long-term follow-up could benefit their child as well as science.

A three-page editorial3 accompanying the study notes that the researchers had the baby's parents sign a consent form acknowledging that their egg was undergoing an experimental technique. But the form only described the procedure superficially, and did not inform the couple of the potential risks of using this method to create a child.

Because the boy could not give consent, “the duties were even higher for clinicians and participants to protect the best interest of the future child”, says Rosario Isasi, a legal scholar at the University of Miami in Florida. In his paper, Zhang says that the parents received “cautious counselling for mitochondrial replacement therapy”.

He told Nature that his team will continue to test the technique, using eggs from prospective mothers who are between 42 and 47 years of age. They want to explore whether mitochondria from younger donors’ cells may stimulate the older eggs' ability to be fertilized and develop normally.