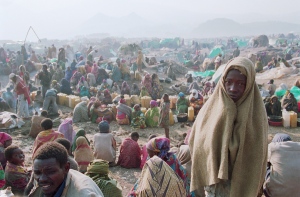 Rwandan refugees with two copies of the A allele of the PRKCA gene were more likely to suffer from post-traumatic stress disorder.

European researchers have identified a gene that is linked to improved memory, but also to increased risk of post-traumatic stress disorder (PTSD).

Dominique de Quervain of the University of Basel in Switzerland and his colleagues recruited around 700 healthy young volunteers, obtaining DNA samples from them to analyse the sequence of their PRKCA gene. This gene is one of many known to be involved in the formation of emotional memories, and encodes an enzyme called protein kinase C-α. The researchers then showed the participants a series of emotionally affecting photographs and shortly afterwards asked them to write down short descriptions of the images.

The researchers then asked 394 additional participants to perform the same task while undergoing brain imaging. This confirmed that variations in PKRCA are linked to the capacity for emotional memory, and further revealed that they were also associated with differences in brain activity during memory encoding.

The task activated a large network of brain regions, including the hippocampus and amygdala, two structures in the medial temporal lobe that are known to be involved in memory formation and emotion, respectively. The brain scans also showed that the A allele was associated with increased activity in the lateral and medial prefrontal cortex, regions that belong to a network involved in the encoding of emotional memories.

Again, the increased activity in these areas was associated with the number of copies of the A allele carried by individuals — people with two copies showed a larger increase in activity than those with just one.

The researchers finally examined the distribution of the A allele in a group of 347 survivors of the 1994 Rwandan genocide who had fled the civil war and were living in a Ugandan refugee camp. All had experienced multiple traumatic events during the civil war, but only 134 of them had been diagnosed with PTSD.

“The A allele was significantly over-represented in those with a diagnosis of PTSD,” says de Quervain. “Carriers of this allele had a roughly 2-fold increase in risk for PTSD.” The work is published today in Proceedings of the National Academy of Sciences1.

Many researchers think that memory must have an important role in PTSD because traumatic memories are one of its core features, says de Quervain, “but it’s very hard to tell that a predisposition for building stronger memory is also a risk for developing the condition”.

For example, in 2007, de Quervain and his colleagues showed that a variant of the α2B adrenoceptor is also linked to enhanced formation of emotional and traumatic memories in both healthy Europeans and survivors of the Rwandan civil war, but it was not associated with an increased risk of PTSD2.

“These findings are of considerable interest,” says neurobiologist James McGaugh of the University of California, Irvine. “It’s well established that emotional arousal enhances memory consolidation, and it’s widely assumed that this may contribute to PTSD, but the finding is important as it provides genetic evidence consistent with that hypothesis.”

The A allele is much more common in people of European than African descent, but exactly how this variation leads to differences in brain activity during the encoding of emotional memory is unclear. Large-scale genomic studies will probably uncover more gene variants associated with increased risk of developing PTSD, says de Quervain, and may provide a better understanding of the molecular mechanisms involved.