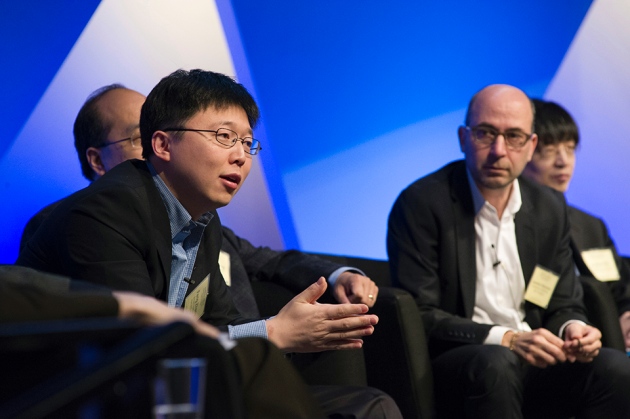 Feng Zhang, a synthetic biologist at the Massachusetts Institute of Technology who develops gene-editing technology, speaks at the summit.

Gene-editing technology should not be used to modify human embryos that are intended for use in establishing a pregnancy, an international summit declared in a statement issued on 3 December.

The International Summit on Human Gene Editing also called for cautious development of medical applications that cannot be passed on to offspring — such as correction of the mutations that cause sickle-cell disease or modification of immune cells to target cancer.

But the summit statement, authored by a 12-member organizing committee, cautioned that many technical and ethical issues should be settled before anyone attempts ‘germline’ editing — the deletion of a gene prenatally in an effort to erase an inherited disease from an embryo and prevent it from being passed on to future generations.

“It would be irresponsible to proceed with any clinical use of germline editing unless and until (i) the relevant safety and efficacy issues have been resolved … and (ii) there is broad societal consensus about the appropriateness of the proposed application,” the statement said.

The organizing committee stopped short of calling for a ban on editing human embryos and germ cells for basic research. “We don't want to slam the door on this idea forever,” said biochemist Jennifer Doudna of the University of California, Berkeley.

The three-day international summit took place at the the US National Academy of Sciences in Washington DC. The meeting was jointly hosted by the US science and medicine academies, the UK Royal Society and the Chinese Academy of Sciences.

Some ethicists and a few scientists at the summit expressed fear that even altering embryos that are not intended for implantation will pave the way for germline editing. And some worried that public opposition to embryo research could cause a backlash against use of genome editing as therapy. “I don’t want even a shadow of a shadow of a concern about the germline stuff to fall on efforts to treat HIV or [ß-thalassaemia] or sickle cell,” said Fyodor Urnov, a scientist at Sangamo BioSciences in Richmond, California.

Others saw a complete ban on embryo research as unrealistic: even if some researchers agree to abstain from editing embryos, or if some countries ban it outright, such work will inevitably be done in places with less oversight, argued George Church, a geneticist at Harvard Medical School in Boston, Massachusetts. “You create a nexus for your worst nightmares,” he said.

The work now continues: over the next year, scientists and ethicists from the three hosting countries will convene to examine issues raised at the meeting. Their consensus report is scheduled to be released in late 2016.