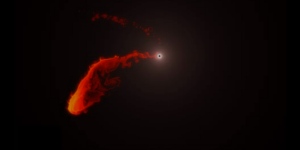 Artist's impression of the black hole guzzling the gas cloud.

A gas cloud that is careering towards the supermassive black hole at the centre of the Milky Way may be the visible trail of a planet-forming disk surrounding a young, low-mass star, astrophysicists propose.

Modelling work by Ruth Murray-Clay and Avi Loeb of the Harvard-Smithsonian Center for Astrophysics in Cambridge, Massachusetts, suggests that planets can form within the powerful gravitational field of a giant black hole. And it heightens expectations about what astronomers might learn as the cloud nears the galaxy’s biggest black hole — an event expected to cause a spectacular light show that could begin as early as next year. The model is published today in Nature Communications1.

Murray-Clay and Loeb began their study last autumn after hearing one of the first public talks about the gas cloud. The team that discovered it proposed that the cloud formed when gas flowing out from two stars collided2. But Murray-Clay and Loeb immediately seized on the idea that the cloud's mixture of gas and ionized dust might come from a planet-forming disk surrounding a single young star.

The idea isn’t as far-fetched as it might sound, because a ring of young stars is known to orbit at about 0.03 parsecs (one-tenth of a light year) from Sagittarius A*, the black hole of four million solar masses that lies at the Milky Way’s centre. In star-forming regions throughout the Galaxy, young stars often have planet-spawning disks, and Murray-Clay and Loeb reasoned that those in the region immediately surrounding a black hole might be no different.

According to their model, gravitational interactions dislodged a young, low-mass star orbiting near the ring’s inner edge. The ejected star, now heading towards Sagittarius A*, is too small and faint to be detected. However, material from the star’s disk — boiled off by ultraviolet radiation from other young stars and then stretched out by the black hole’s tidal gravitational forces to form an elongated cloud — can be observed.

The simulated gas cloud matches key features of the observed cloud, Murray-Clay and Loeb report. However, they calculate that there is only a 0.1% chance that a recently dislodged star would have the same orbit as the gas cloud. This small percentage “is the main theoretical problem” with the model, says Stefan Gillessen at the Max Planck Institute for Extraterrestrial Physicsin Garching, Germany, a member of the team behind the cloud's discovery.

The duo's model predicts that the gas cloud should have a dense core, which would be revealed by an increase in brightness as the cloud ventures closer to the black hole, Loeb notes. If the model is confirmed, it would suggest that young, low-mass stars that remained in the ring have disks stable enough to forge planets.

Regardless of the cloud’s origin, it could take decades for the whole of it to plunge into the black hole. Material could start falling onto a swirling accretion disk surrounding the black hole by the end of 2013 and continue for 20–40 years, says astronomer Andreas Burkert of the Ludwig Maximilians University in Munich, Germany, another member of the cloud-discovery team. And infalling gas must still make its way from the accretion disk to the black hole itself before most of the fireworks begin, he says.

The activity could come in bursts or appear as a steady brightening, and could also include a jet of hot gas shooting out of the black hole, says Burkert. The nature of the light show could help researchers to answer an enduring puzzle — why Sagittarius A* is so quiescent compared with other supermassive black holes,seemingly not having guzzled a substantial meal of gas and stars for years. But even before it dives into the black hole, the gas will heat up and glow brightly — at around the time of the cloud’s closest approach to Sagittarius A* next summer, Loeb says.

The appearance of the glow will give the first clues about the interstellar medium that the cloud must pass through to approach the black hole, says Eliot Quataert at the University of California, Berkeley, who was also a co-author of the gas-cloud-discovery paper. The density of the space the gas cloud ploughs through will affect its glow, for example: just as a meteor that ploughs through Earth’s atmosphere will put on a very different light show from a meteor zipping through the airless region above the Moon. Characterizing the interstellar medium “gives us some very important clues about how the black hole gathers up gas from its surroundings, and addresses the fundamental question of how  massive black holes grow at the centres of galaxies," Quataert says.