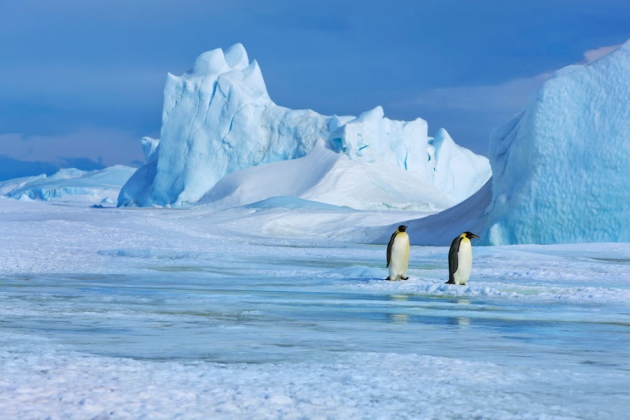 The Antarctic ice sheet is the largest single ice mass on Earth.

So much ice is piling up in the vast expanses of East Antarctica that, overall, it counterbalances the losses seen at glaciers thinning elsewhere on the frozen continent. It will take decades for Antarctic melting to overtake the mass gains and begin contributing substantially to sea-level rise, a new study argues.

The calculations are the latest in a long-running effort to weigh Antarctica’s ice. Whereas melting in Greenland has dramatically reduced its ice sheet, the situation in Antarctica is more complex.

“Parts of Antarctica are losing mass faster than before,” says Jay Zwally, a glaciologist at NASA’s Goddard Space Flight Center in Greenbelt, Maryland, and lead author of a paper to appear in the Journal of Glaciology1. “But large parts have been gaining mass, and they’ve been doing that for a very long time.”

The findings do not mean that Antarctica is not in trouble, Zwally notes. “I know some of the climate deniers will jump on this, and say this means we don’t have to worry as much as some people have been making out,” he says. “It should not take away from the concern about climate warming.” As global temperatures rise, Antarctica is expected to contribute more to sea-level rise, though when exactly that effect will kick in, and to what extent, remains unclear.

But the work does highlight lingering uncertainties about Antarctica’s ice sheets, says Edward Hanna, a climatologist at the University of Sheffield, UK, and leader of a 2013 review2 that explored the difficulties in measuring ice sheets.

Many earlier studies have found an overall net loss of ice from Antarctica. A 2012 review3, which aimed to reconcile findings from the many techniques that are used to measure ice-mass balance, calculated a loss of 72 billion tonnes of ice from the entire Antarctic ice sheet each year between 2003 and 2008. For roughly the same period, Zwally’s team calculated a gain of 82 billion tonnes a year.

Zwally and his colleagues used data on the changing height of the ice-sheet surface from the European Space Agency’s European Remote Sensing radar satellite between 1992 and 2001, and from NASA’s ICESat laser-ranging satellite between 2003 and 2008.

Across the period of the study, East Antarctica gained the most mass, followed by the West Antarctic interior. Glacial ice forms as snow compresses under its own weight. In this case, the gain in ice mass in parts of Antarctica has not come from snowfall in the modern era, but from heavier snows that fell about 10,000 years ago, says Zwally. That snow became ice and started to flow slowly towards the sea — but so slowly that the ice began to thicken.

The effect is not big — a little more than a centimetre of thickening each year. But over thousands of years, and over the vast expanse that is East Antarctica, those tiny bits of extra ice add up to a lot of extra mass.

Around the edges of the continent, Zwally’s team saw the same rapid retreat of glaciers that many other groups have documented. At places such as the Pine Island and Thwaites glaciers, and along the Antarctic Peninsula, glaciers are melting at rates unprecedented in recorded history.

Disputes about the rate of Antarctic ice loss will probably continue. The gravity-measuring Gravity Recovery and Climate Experiment (GRACE) satellites, run by NASA, have measured accelerating losses in Antarctica4 (although Zwally argues that the discrepancy is due at least partly to how GRACE researchers account for changes in the height of the bedrock as ice melts). And ESA’s Cryosat-2 radar satellite found small losses5 in that region in 2010–13.