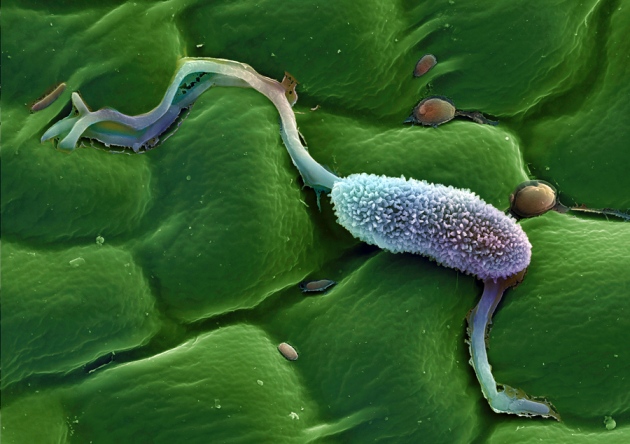 The microorganism that causes potato blight — seen on an apple-tree leaf in this coloured scanning electron micrograph — has acquired genes from bacteria.

A single gene from bacteria has been donated to fungi on at least 15 occasions. The discovery shows that an evolutionary shortcut once thought to be restricted to bacteria is surprisingly common in more complex, eukaryotic life.

Bacteria frequently trade genes back and forth with their neighbours, gaining abilities and traits that enable them to adapt quickly to new environments. More complex organisms, by contrast, generally have to make do with the slow process of gene duplication and mutation.

There are a few examples of gene swapping between eukaryotes — the domain of life that includes fungi, plants and animals — and even from bacteria to eukaryotes (see 'Bacterial gene helps coffee beetle get its fix'). But such events, known as horizontal gene transfer, were thought to be rare.

But Daniel Muller, a microbial ecologist at the University of Lyons in France, and his colleagues have cast doubt on that assumption after studying bacteria in the soil around the roots of plants. They found that the bacterial gene acdS, used to promote the growth of plant roots, was also present in several types of fungus. Their work is published today in Proceedings of the Royal Society B1.

Muller and his colleagues scanned the genomes of 149 eukaryotes, and found acdS-like genes in 65 of them — 61 in fungi and 4 in parasitic microorganisms called oomycetes, including Phytophthora infestans, the microbe responsible for the Irish potato famine. After analysing the organisms' genetic family trees, the researchers determined that the most likely explanation was that three different kinds of bacterium had donated the gene to the fungi and oomycetes in a total of 15 different horizontal-gene-transfer events.

“What we thought happens only sometimes, actually happens at a greater scale,” says Muller, “with multiple donors and multiple recipients.”

Muller also showed that the bacterial gene seems to retain its original function of enhancing the communication between the organism and its plant hosts to help it better colonize roots.

Eukaryotes may therefore be able to suddenly gain characteristics that help them adapt to new environments more frequently than biologists thought. “Bacteria are so abundant and diverse, they could be a rich reservoir of new genes and functions for eukaryotes,” says Muller.

Charles Davis, an evolutionary biologist at Harvard University in Cambridge, Massachusetts, says the work shows that the “promiscuity” of gene transfer between bacteria and eukaryotes is unexpectedly high. But it faces the same problem as many such studies: the analysis of the genetic trees is not detailed enough to clarify where and when the transfers took place. “They can’t exclude the possibility that the number of transfers has been overestimated,” he says.

The other big question, he says, is how did it happen? “What’s the ecological context?”

Muller agrees that the mechanism of the gene transfer remains a mystery. His team did not find any evidence of transposable elements — bits of DNA that can 'jump' from one part of the genome to another and are typically associated with the appearance of new genetic material. They also found no other bacterial genes near the acdS gene in the fungi, although gene transfer normally would invole more than one gene. But however it works, the fact that the fungi and bacteria live close together in the soil near plants would provide plenty of chances for genes to move across.

Davis agrees that physical proximity is key to horizontal gene transfer: “That’s why I study it in parasitic systems,” he says. “It makes the relationship between donor and host more obvious.”