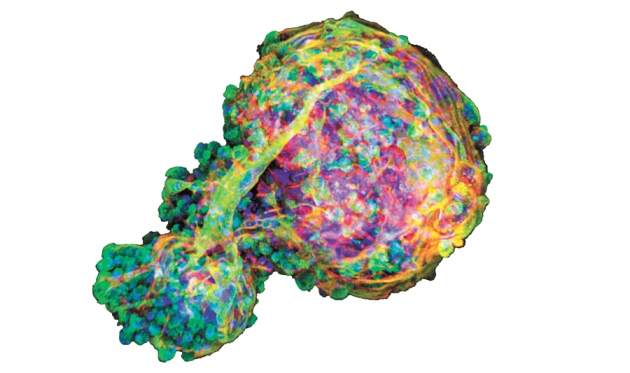 Embryonic stem cells may have the ability to repair damaged tissue.

A landmark stem-cell trial is sputtering back to life two-and-a-half years after it was abandoned by the California company that started it. But it now faces a fresh set of challenges, including a field that is packed with competitors.

The trial aims to test whether cells derived from human embryonic stem cells can help nerves to regrow in cases of spinal-cord injury. It was stopped abruptly in 2011 by Geron of Menlo Park, California (see Nature 479, 459; 2011); the firm said at the time that it wanted to focus on several promising cancer treatments instead. Now, a new company — Asterias Biotherapeutics, also of Menlo Park — plans to resurrect the trial with a US$14.3-million grant that it received on 29 May from the California Institute for Regenerative Medicine (CIRM), the state’s stem-cell-funding agency.

But the field has moved on since Geron treated its first patient in 2010, and the therapy that Asterias inherited is no longer the only possibility for spinal-cord injury. StemCells, a biotechnology company in Newark, California, has treated 12 patients in a safety study of a different type of stem cell, and it plans to start a more advanced trial this year to test effectiveness. And another entrant to the field, Neuralstem of Germantown, Maryland, received regulatory approval in January 2013 to begin human tests of its stem-cell product.

Geron’s human trial was the first approved to use cells derived from human embryonic stem cells. But regulators halted it twice, once citing concerns about the purity and predictability of the cells being implanted, and again after the company reported seeing microscopic cysts in the spinal cords of rats that had been treated in preclinical studies. The worry was that the cysts could be teratomas — uncontrolled growths that can form from embryonic stem cells, a feared side effect of treatment. Geron later said that the growths were not teratomas, and the US Food and Drug Administration allowed the trial to proceed. But after injecting the cells into five of the ten intended patients, the company said that it had run out of money for the trial.

Geron founder Michael West and former chief executive Thomas Okarma then formed Asterias, which bought Geron’s stem-cell therapy last year. The company plans first to treat three patients with spinal-cord damage in the neck, using a low dose of the stem cells; it will then treat different people with higher doses to see if the therapy can restore any sensation or function in the trunk or limbs.

The five patients previously treated by Geron, whom Asterias continues to track, had cord damage at chest level. On 22 May, Asterias reported that none of those five had experienced serious side effects from the treatment or developed immune responses to it.

Researchers say that the continuation of the former Geron trial is important because it uses a type of cell different from the fetus-derived ones used by StemCells and Neuralstem. Geron surgically implanted embryonic stem cells that had been coaxed in vitro to grow into immature myelinated glial cells, which insulate nerve fibres when mature. The other companies are using partially differentiated cells derived from fetal brain tissue, which might produce substances that protect surviving tissue and make new connections in the neural circuitry.

“It’s very good for the field, because we now have multiple cell lines being tested in very similar populations of patients, and this will help us define what is needed to make this approach work,” says Martin Marsala, a neuroscientist at the University of California, San Diego, whose work has shown that Neuralstem’s cells can develop into working neurons and restore movement to rats with cord injuries in the neck.

Still, some in the field question whether stem cells are a good candidate for treating paralysis. Spinal trauma can destroy a range of cells; it can be difficult to access the injury site; and damage can be very severe. Treating paralysis “may be asking a lot more of the cells than they are capable of biologically”, says Robert Lanza, chief scientific officer at Advanced Cell Technology in Marl­borough, Massachusetts, which is now testing embryo-derived stem cells in two eye diseases.

Lanza says that his company opted not to buy Geron’s stem-cell therapy in part because the treatment did not seem effective enough in animal models. Some of the scientists who reviewed Asterias’s grant proposal to the CIRM also expressed concern about the treatment’s effectiveness in animals. “It would be fantastic if [the cells] work, but I think it would also be wise not to set expectations too high,” says Lanza.

Marsala counters that the cells do not have to heal the spinal cord completely to improve people’s lives. He notes that simply replacing injured or dead cells with healthy ones might prevent the damage from spreading. StemCells has reported that four people in its studies have recovered some sensation; two previously had no feeling in their lower limbs and another two had some but were able to feel more after the cell transplant. Marsala sees this as a sign that the therapy is working. “Nobody is claiming that you are going to see complete recovery in these patients,” he says.

Christopher Scott, an ethicist at Stanford University in California, says that before scientists can judge the effectiveness of the therapies, the companies must complete their trials. But he wonders whether Asterias has sufficient resources to make good on its promise to carry Geron’s therapy through to completion.

Scott notes that Geron spent hundreds of millions of dollars developing spinal-cord and other embryonic-stem-cell therapies, but managed to treat only five people. The restarted trial will face even greater scrutiny, and he worries that if it were halted, it would be a huge blow to patients.“Bioethicists and policy analysts will be watching carefully,” he says.