Pacific bluefin tuna have carried radiation across the ocean from Japan to California. The radioactivity is well below levels that would cause concern for human health, but the results show that fallout from the meltdown at the Fukushima Daiichi nuclear power plant last year provides an unusual opportunity to track the animals, air and water of the Pacific Ocean.

Bluefin tuna (Thunnus orientalis) spawn in Japanese waters before swimming to the Californian coast. Researchers who tested 15 fish caught after the disaster in March 2011 found that all contained traces of caesium-134, a water-soluble radioisotope spewed into the ocean by the meltdown. Fish that travelled to California before 2011 did not carry the isotope. The results were published this week in the Proceedings of the National Academy of Sciences1. 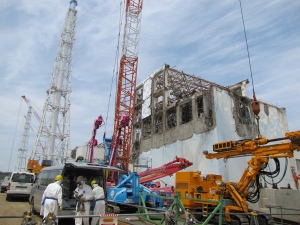 The researchers compared ratios of caesium-134 and the more common isotope caesium-137 to estimate that the tuna had left Japanese waters about four months before they were captured. The calculation took into account the growth of the fish and background radiation. The method needs refinement, but some haste is required: caesium-134 has a half-life of only two years.

The bluefin tuna's migratory cycle is fairly well known, so the study “didn’t tell us very much about migration patterns", says Daniel Madigan, a marine biologist at Stanford University in Pacific Grove, California, and a co-author of the paper. But Madigan says that the results provide proof of concept for ways to study the migration patterns of other Pacific animals, such as whales and seabirds.

Scientists often electronically tag animals to follow their migrations, but the isotopes provide another dimension. “Electronic tags record that animal’s movements from that point forward. This is a cruder tool, but it lets you look backwards,” says Madigan.

For decades, researchers exploited radioactive isotopes released in cold-war weapons tests. In the 1940s and 1950s, The Marshall Islands in the mid-Pacific hosted multiple nuclear blasts, which leached tritium and carbon-14 into the water.

The Chernobyl disaster in Ukraine in 1986 released water-soluble caesium-137 and strontium-90. Ken Buesseler, a marine chemist at Wood’s Hole Oceanographic Institution in Massachusetts, began his career analysing currents in the Black Sea using radioisotopes from Chernobyl. He is now considering using the leaks from Fukushima for similar purposes. Researchers can already track the horizontal flow of oceans using floating devices that emit radio signals, but following currents beneath the surface is trickier. Isotopes from Fukushima could help with that: radiation levels in waters from the deep tell us what happens to material absorbed by the ocean. “It can be useful for knowing the uptake of carbon dioxide or other pollution,” says Buesseler.

Fresh releases of radioactivity have been less common since the Comprehensive Nuclear-Test-Ban Treaty (CTBT), negotiated in the 1990s, ended cold-war-style showboating. But the organization in charge of tracking compliance with the treaty runs a detection network to spot tests, such as the underground detonation by North Korea in 2009, and that network can help with research on the fallout from Fukushima (see 'Radiation data from Japanese disaster starts to filter out').

Harry Miley, a physicist at the US Pacific Northwest National Laboratory in Richland, Washington, used his CTBT apparatus to monitor levels of radiation from Fukushima in the days and weeks following the disaster. Miley's team used analysis methods normally reserved for tracking the direction and energy of individual radioactive particles released from illicit explosions. Combining such information with an atmospheric model, Miley was able to confirm when radiation was released from Fukushima.

Tracking that radiation can improve simulations. “One of the most important scientific outcomes, I think, will be testing atmospheric models,” says Miley. In other, not-yet published, work, Scientists in Taiwan have used the Fukushima radiation to confirm a model of the monsoon that sweeps across South East Asia every December–March.

Yet other studies are a bit more unusual. Beekeeping is popular in Tokyo, so one Japanese group is examining caesium trapped in sticky honey. The researchers will probably find some interesting results beyond radiation science: “They may also end up learning about bees,” says Miley.

Buesseler thinks that basic marine science using radiation from Fukushima will take off in earnest in the next few years, once grant proposals have been funded. But for now, there are a multitude of questions about the damage that Fukushima may have done or still be doing to ecosystems. US research efforts are complicated by the fact that no single US government department or agency has responsibility for such work.

An accurate estimate of how much radiation from Fukushima is in the waters of the Pacific Ocean would be possible with enough funding, says Buesseler. But voyages to collect water samples cost millions of dollars. “If I had 1,000 samples across the Pacific I could look at the caesium ratios" and come up with an estimate, he adds. "But currently we don’t know the total radiation release into the ocean."