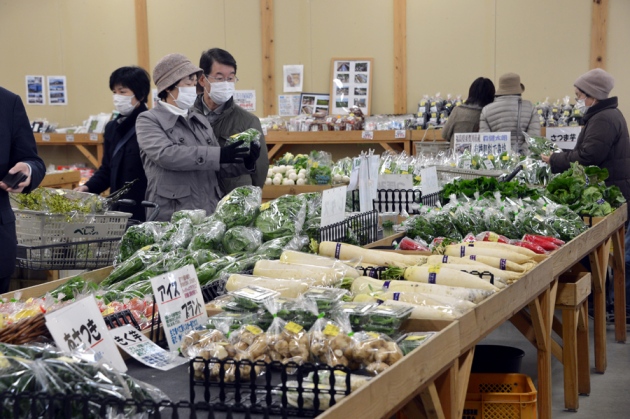 Fresh farm produce on sale in Koriyama, 200 km northeast of Tokyo, in February 2013.

A massive food-monitoring programme in the wake of the Fukushima nuclear disaster has provided scientists with a unique look at how radioactivity peaks in different foods after a nuclear spill.

Almost four years since the incident, the first analysis of the data also confirms what multiple studies of Fukushima residents have already shown: few people are likely to have eaten food that exceeded strict Japanese limits on radioactive contamination.

On 11 March 2011, a massive offshore earthquake triggered a tsunami that swamped the Fukushima Daiichi nuclear power station. Plumes of gas from the reactor released radioactive isotopes into the local area, which were transported farther afield by wind and rain, before falling onto plants and seeping into soil.

The Japanese government banned products that were likely to have been affected, including leafy vegetables, which can absorb radioactive elements through their leaves, and milk from animals that had been feeding on local grass.

The government also instigated an extensive monitoring campaign, sampling foods before they hit the market for levels of radioactive elements such as caesium-137, and banning producers or areas that exceeded regulatory limits.

The safety effort has been commended for being very effective. It also produced a vast database. Stefan Merz, an environmental scientist at the Vienna University of Technology in Austria, and his colleagues have now analysed the database of almost 900,000 samples collected between 2011 and 2014, and publish their results in Environmental Science and Technology1.

The researchers found that during the first year after the accident, 3.3% of food from the Fukushima region had above-limit contamination — these products were then prevented from reaching the market. It rose slightly the following year but by 2014, the proportion had fallen to 0.6%. For Japan more widely, the figures were 0.9% falling to 0.2%, says co-author Georg Steinhauser, an environmental scientist at Colorado State University in Fort Collins. Combined with the fact that people need to eat huge amounts of above-limit food to exceed the annual permitted radiation dose, the chance of anyone exceeding it was very low, he says.

That conclusion fits with several studies, including one done in 20132 that showed that only members of the public who bypassed the monitoring by eating home-grown food — four older residents — showed any elevated radiation levels, and these soon returned to normal when eating food that had been regulated.

But the analysis also details how radiation levels rose and then fell in various foods in the wake of the disaster (see 'Fukushima food'), to reveal information about how Japan’s ecology and diet differ from those elsewhere.

Of mushrooms and boar

From Chernobyl and weapons-testing sites in the twentieth century, scientists already knew that mushrooms, which soak up radioactive elements from the soil, have a tendency to accumulate more radionuclides than most other vegetables.

The data from Fukushima show that the radioactivity levels fell quickly in most vegetables: just five months after the disaster, only a handful of samples exceeded the limit. They also showed two peaks for mushrooms, one for fresh mushrooms and the other for dried mushrooms. Tea leaves showed a late spike — they were harvested later than other leafy plants, but retained some radioactivity because older leaves transferred the radioactive elements to younger leaves, says Steinhauser. 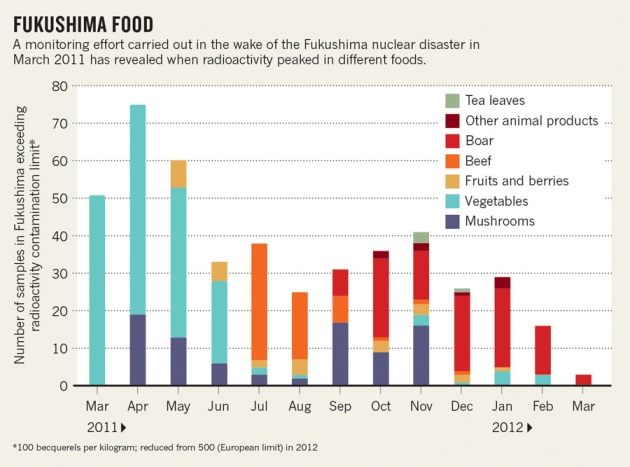 Even though the radioactivity in Fukushima's food has now returned to pre-accident levels, consumption has not yet recovered, says Jun Furukawa, an environmental scientist at the Center for Research in Isotopes and Environmental Dynamics at the University of Tsukuba in Japan.

As a result, ‘solidarity supermarkets’ have sprung up that only sell Fukushima produce, and the Fukko Shien Sakaba restaurant in Tokyo reportedly specializes in food from the area and donates profits to affected regions.

To help lift the stigma, Steinhauser carried out his own experiment last summer. After six weeks in the region eating only local produce, drinking only tap water and maximizing his intake of the foods that tend to accumulate the highest volumes of radioactive elements, a scan revealed no traces of radioactivity in his body. “I was convinced that the radioactivity levels in my body would be very low, but I was surprised that no artificial radioactivity was detectable at all,” he says.

Geraldine Thomas, a molecular pathologist at Imperial College London, describes Japan’s handling of food in the wake of the crisis as excellent and says that Steinhauser's experience was what you would expect. “He would have had more of a dose on the plane going over there than he would have done from eating the food.”