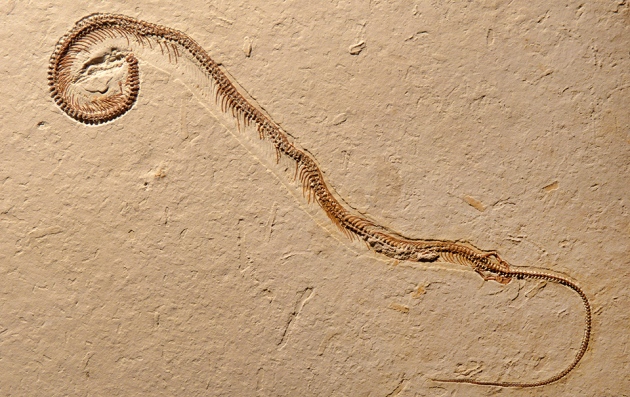 The first four-legged fossil snake ever found is forcing scientists to rethink how snakes evolved from lizards.

Although it has four legs, Tetrapodophis amplectus has other features that clearly mark it as a snake, says Nick Longrich, a palaeontologist at the University of Bath, UK, and one of the authors of a paper describing the animal in Science1.

The creature’s limbs were probably not used for locomotion, the researchers say, but rather for grasping prey, or perhaps for holding on to mating partners. Such speculation inspired the snake’s name, which loosely translates as ‘four-legged hugging snake’.

Tetrapodophis was originally found in the fossil-rich Crato Formation in northeastern Brazil several decades ago. But its legs can be difficult to see at first glance, and it languished in a private collection after its discovery, assumed to be unremarkable.

“I was confident it might be a snake,” says David Martill, a palaeobiologist at the University of Portsmouth, UK, who came across the find in 2012. “It was only after getting the specimen under the microscope and looking at it in detail that my confidence grew. We had gone to see Archaeopteryx, the missing link between birds and dinosaurs, and discovered Tetrapodophis, the missing link between snakes and lizards.” 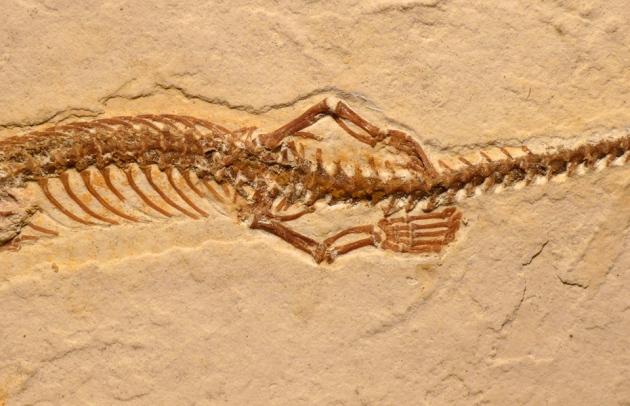 Despite these legs, this is definitely a snake.

Scientists have long argued over whether snakes evolved from land or marine animals. Tetrapodophis lacks adaptations for marine life, such as a tail useful for swimming. But its skull and body proportions are consistent with adaptations for burrowing. Longrich says that the finding unequivocally shows that snakes originated in the Southern Hemisphere and strongly supports a terrestrial origin.

Another striking feature of the fossil is its relative length. Tetrapodophis has 272 vertebrae, 160 of which are in its main body, not its tail. This number is more than twice the limit that researchers thought elongated bodies could reach before starting to lose their limbs.

Martin Cohn, an evolutionary developmental biologist at the University of Florida, Gainesville, says that the animal’s limbs must have been repurposed by evolution instead of simply dwindling away as its body became longer. This insight contradicts some assumptions about snake evolution. As Cohn explains, the paradigm about elongation of the trunk leading to limb loss now has to be adjusted. "This fossil shows that the two processes can be decoupled,” he says.

The discovery comes in a major year for snake evolution research, Cohn says. In January, the snake fossil record was pushed back by some 70 million years to the Middle Jurassic, around 160 million years ago, with the report of the oldest snake ever found2. Although Tetrapodophis is not the oldest snake, Cohn says, “from a developmental perspective, this could be one of the most important fossils ever found. The combination of a snake-like body with complete forelimbs and hindlimbs is like a snake version of Archaeopteryx.” 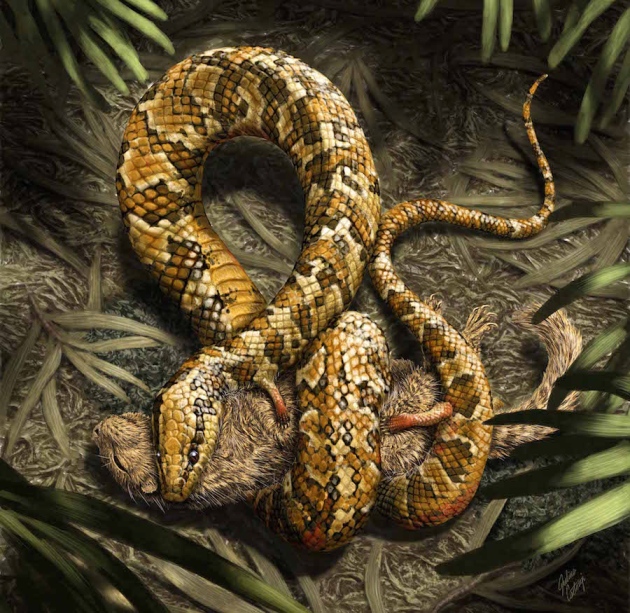 An artist's impression of Tetrapodophis putting its legs to work subduing its prey.