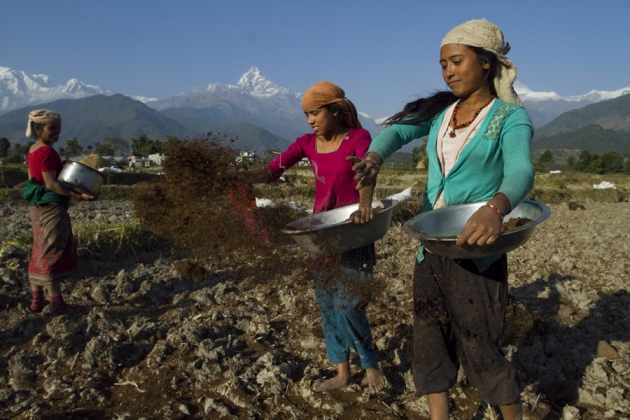 Farmers in Nepal are finding it harder to cope with the effects of climate change.

A snapshot of weather-related disasters in the Himalayas suggests that things are amiss on the roof of the world.

This spring, for example, western Nepal was hit by a severe drought, leading to crop failures and exacerbating an already serious food crisis. In June, the same region was devastated by its worst floods in 50 years, caused by unusually intense monsoon rains. The deluge wreaked havoc in the northern Indian states of Uttarakhand and Himachal Pradesh, killing at least 5,700 people and causing an estimated loss of US$2 billion.

After decades of such climate-related incidents, the eight member countries of the International Centre for Integrated Mountain Development (ICIMOD), a regional body, have agreed that enough is enough. On Monday, they launched a three-year study that aims to comprehensively assess the current state of the Hindu Kush Himalayas, the enormous area sustained by the world’s highest mountain range, and to make recommendations on how it might be safeguarded and developed.

And none too soon, say many scientists. As climate change tightens its grip, “disasters will become increasingly frequent”, says Vinod Tewari, a geologist at the Wadia Institute of Himalayan Geology in Dehradun, India. The Himalayas are getting warmer at a rate of 0.6 °C each decade, three times the global average1. Rainfall there is increasing at a rate of 65 millimetres per decade and the monsoon season is getting wetter1. However, winters are getting drier (see ‘Trouble in store’). 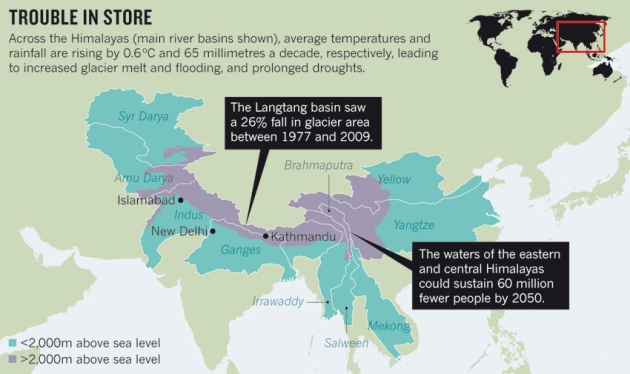 As a result of the warming, most Himalayan glaciers are retreating rapidly. Glacier lakes are becoming larger and more numerous, inundating pastures and threatening downstream communities. The changing climate is also “taking a toll on alpine pastures and forests”, says Maharaj Pandit, an ecologist at the University of Delhi in New Delhi. Some plants are shifting to higher altitudes2, others are on the verge of extinction, and the incidence of invasive species is rising. “If the warming trend persists, we will see drastic changes in the ecosystems, with devastating consequences on biodiv­ersity and the livelihood of mountain communities,” he adds.

India and Nepal are not the only nations affected. Hindu Kush is a 3,500-kilometre mountain chain that spans eight countries — from Afghanistan to Myanmar. Known as Asia’s water tower, the mountains provide ecosystem services and support the livelihoods of more than one-fifth of the global population.

“The impact of climate change is comp­ounded by many other challenges that face the Himalayas,” says David Molden, ICIMOD’s director general. In the past few decades, the region has seen increasing population growth, energy shortages, pollution, environmental degradation and disasters — all of which challenge traditional livelihoods. “Once self-sufficient people now face dire economic poverty,” he says.

To mitigate climate change, it is crucial to factor in all those challenges, says Molden. This is where ICIMOD’s assessment comes in. It will, he says, review the current state of knowledge on glaciers, biodiversity, water resources and poll­ution, identify trends of changes in climate, demography and land use, and address issues such as poverty, hydropower development, natural disasters and food security. The result will be a set of policy recommendations on, for example, sustainable grazing, increased collaboration between nations, deforestation and flood prevention.

The Himalayas are of global significance, says Volker Mosbrugger, director of the Senckenberg Research Institute and Natural History Museum in Frankfurt, Germany. The report will help to manage the region’s wealth of resources sustainably and empower mountain communities to tackle climate change, he says.

Pandit lauds the project as “timely and important”, but says that it is the enforcement that matters. “Whatever decisions or recommendations are given, they have to reach local authorities.”