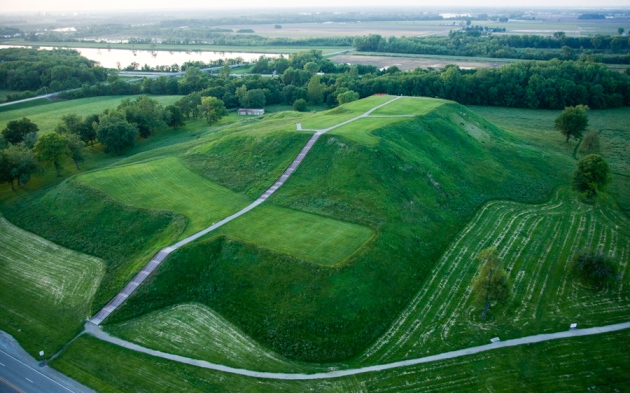 Cahokia was a pretty big deal in the 1100s. Founded by a complex cultural group that built tall mounds and sweeping plazas, the city near present-day St Louis, Missouri, was home to tens of thousands of people. But its population began declining around 1200, and by 1350, Cahokia was a ghost town.

The cause of the settlement’s decline is a historical puzzle. But research published this week in the Proceedings of the National Academy of Sciences suggests that a major Mississippi River flood around 1200 hastened Cahokia’s end1.

Samuel Munoz, a geographer at the University of Wisconsin–Madison, and his colleagues based this finding on analysis of sediments from Horseshoe Lake, just 5 kilometres from Cahokia. The team extracted sediment cores up to 5.5 metres in length from the lakebed, representing 2,000 years of deposition.

A series of light bands of fine sediment in the core “popped out to us immediately”, Munoz says. A student dubbed the bands “lake butter” because of their unusually fine and silky texture.

Munoz says that this sediment would have entered the lake during major floods along the Mississippi River. “We call the river the 'Big Muddy' for a reason,” he adds. “This sediment is essentially the sediment that makes the water muddy and brown.”

Cahokia's heyday, which began when residents started to farm maize (corn) on its rich river bottomlands, falls neatly inside the longest flood-free period, from 600 to 1200. Climatic conditions across North America were particularly arid then.

Flooding might have been one of many environmental and social factors that played a part in the city's decline, says Munoz. “Can we say that this flood at 1200 caused the abandonment of Cahokia? No. We can’t say that with any certainty,” he adds. “All we can show is that there is a correspondence in time.”

Larry Benson, adjunct curator of anthropology at the University of Colorado Boulder’s Natural History Museum, has published analyses of tree-ring data that suggest that drought doomed Cahokia. But he says that flooding also could have contributed by shifting agriculture from the city's floodplains to higher ground. That would have made Cahokia's harvest more dependent on rainfall.

Benson would like to see precise estimates of when historical floods occurred, noting that dates offered in the latest paper have margins of error extending over many decades. “If we had a better idea of timing, the puzzle would be put together much more perfectly,” he says.

George Milner, an archaeologist at Pennsylvania State University in University Park, finds the analysis convincing, and thinks that floods on the Mississippi and Missouri rivers could have affected many smaller prehistoric cities as well. What is now the US Midwest began to depopulate around 1200, he says, and floods, droughts, cold years and hot years could all have triggered social instability. “The real problem of these kinds of societies is when people experience back-to-back failures,” he says.

Munoz sees a lesson for present-day communities in the Midwest, which still rely on the region’s great rivers to transport goods and supply water to rich, riverside croplands. “Rivers are very sensitive to climate change,” he says. “We need to keep a close eye on them.”