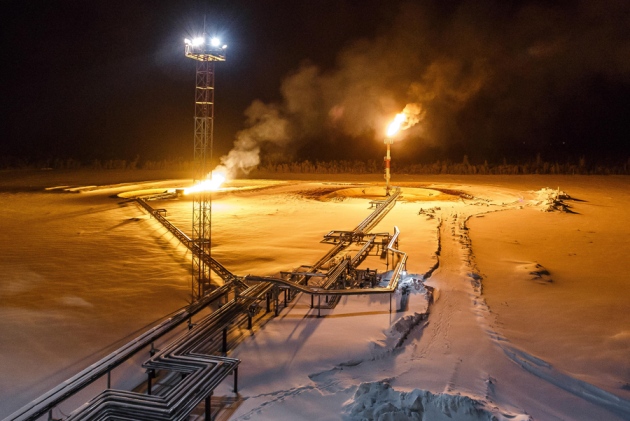 A gas flare at an oil refinery in the Sorovskoye field in Siberia, Russia.

TREND WATCH: Around 3.5% of the world’s natural-gas supply was wastefully burned, or ‘flared’, at oil and gas fields in 2012, according to the latest estimates from satellite data1.

The United States has the greatest number of flares, but Russia leads the world in the total volume of flared natural gas (see chart, 'Top natural-gas-flaring nations'). In 2012, the 143 billion cubic metres of gas flared led to the emission of more than 350 million tonnes of carbon dioxide, around 10% of the annual emissions of European Union member states.

Estimates for later years have yet to be published. But a preliminary analysis suggests that the overall volume of gas flared has remained fairly constant, says Christopher Elvidge, a remote-sensing specialist who leads a team at the US National Oceanic and Atmospheric Administration (NOAA) in Washington DC that collects gas-flaring data. 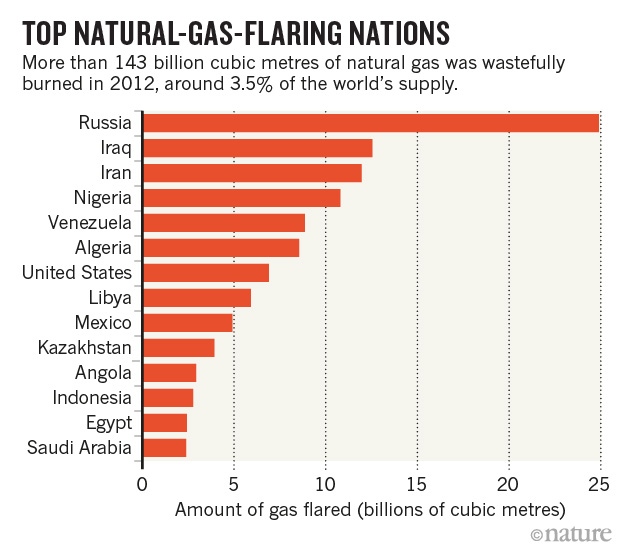 Flaring is common in oil and gas fields because producers deem it faster and cheaper to burn natural gas than to capture and use it, typically because they lack pipelines to economically transport the gas to market. But official data on the extent of the practice are scarce.

In a 25 December paper, the NOAA researchers report tracking flares using an instrument aboard a NASA weather satellite that takes images of Earth in infrared and visible light1.  (Previously, the team had used images from a US Air Force defence satellite, but a degradation in the satellite’s orbit made it impossible to collect accurate global data on gas flaring).

“Flaring is an unproductive waste of a valuable, non-renewable resource and a significant source of carbon dioxide and methane emissions,” says Bjørn Håmsø, who manages the Global Gas Flaring Reduction Partnership at the World Bank in Washington DC.

The World Bank aims to end routine gas flaring at oil production sites around the world by 2030, in an initiative launched last year. Some 45 governments, organizations and oil companies had signed up to the plan by the end of the international climate negotiations in Paris.

High-quality national estimates, with detail on how much natural gas is being burned off where, will help governments to implement policies to reduce flaring and track progress, Håmsø says. Estimates for subsequent years are expected to be published in the next few weeks.