Amphibious fish that feed on land use water held in their mouths to help them grab and manipulate their prey. The unusual feeding behaviour of mudskippers (Periophthalmus barbarus), captured in high-speed and X-ray video by biologist Krijn Michel and his colleagues at the University of Antwerp, could shed light on the evolution of sea-dwelling animals into terrestrial ones.

Michel's colleagues showed in 2006 that eel catfish (Channallabes apus) can successfully feed on land1. But although much research has looked at the changes that allowed the first land animals to move around out of water, less is known about how these animals were able to eat once they made it to land.

In water, fish can use ‘suction feeding’ — gulping in water to draw prey into their mouths. But on land, manipulating food near your mouth without a tongue is a trickier proposition.

To get around this problem, mudskippers come onto land with water in their mouths. The team’s videos show that as the fish approaches its prey — in the experiments, a piece of prawn on a Plexiglass plate — this water starts to protrude from the mouth. As the mudskipper's jaws envelop the target, the fish uses its water to manipulate the food.

“First it spews out the water, then very rapidly… it’s sucking the water back up again. They’re using the water that is in their mouth as a substitute for a tongue,” says Michel. The results were published on 18 March in the Proceedings of the Royal Society B2. 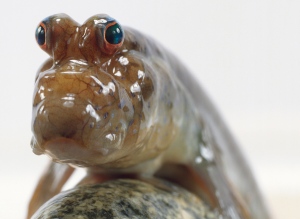 The mudskipper moves various bones to produce its on-land suction — and these facial contortions are different from those used by suction-feeding fish in water. But they are similar to the way newts manipulate prey, Michel says. So it is possible that a similar use of water to manipulate food was an early stage in the evolution of feeding on land.

Having what the researchers call a “hydrodynamic tongue” means that mudskippers can swallow their prey on land, unlike some other species that must return to the water to swallow what they capture ashore. But the mudskippers are not as effective at feeding themselves in water.

“They’re very good at feeding on land. We put the food there and within a fraction of a second it’s gone,” says Michel. “They’re remarkably bad at feeding underwater. They miss the food completely sometimes.”