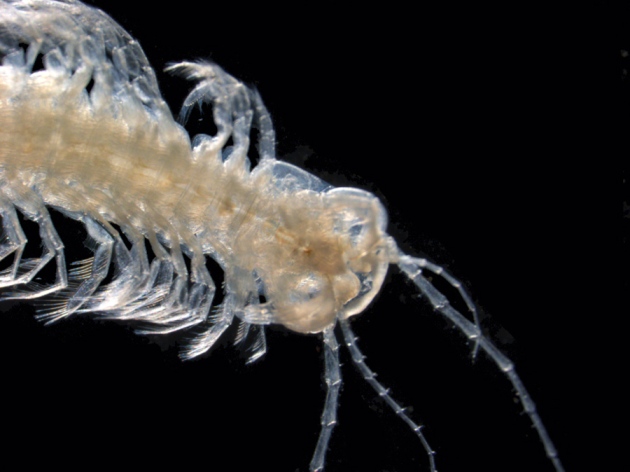 First described three decades ago, Speleonectes tulumensis is now the first crustacean known to science that uses venom for hunting.

Scattered throughout Mexico and central America are pools where water surfaces from underground networks of caves, which the ancient Maya said were gateways to the underworld. Biologists have now found that these bodies of water are home to a mysterious real-world creature as well: the first venomous crustaceans known to science.

The crustacean in question, Speleonectes tulumensis, belongs to the remipedes, a group first described in 1981. Observing these pale, blind and tiny animals in their natural habitat has been hard because they live in labyrinthine cave networks that are as difficult for divers to navigate as they are dangerous. Nonetheless, biologists including Björn von Reumont and Ronald Jenner, both of the Natural History Museum in London, found remipedes tossing away empty exoskeletons of shrimp, presumably having fed on them.

In 2007 researchers discovered structures on the animals’ front claws that resemble hypodermic needles, fuelling speculations that they might be injecting something into their prey. That idea is now proving true, as von Reumont and Jenner report in Molecular Biology and Evolution1. The researchers found that reservoirs attached to the needle structures are surrounded by muscles that can pump fluid through the needles. Moreover, they found glands in the centre of the remipede body that manufacture venom and are connected to the reservoirs.

I drink your milkshake

Von Reumont and Jenner also found that the crustaceans’ venom is made predominantly of peptidases, enzymes that have roles in digestion and are also found in rattlesnake venom, where they help to digest prey. The crustacean venom also contains a toxin that is nearly identical to a paralysis-inducing neurotoxin first described in spiders in 2010. “We think the neurotoxin is stopping their prey getting away and that the peptidases are allowing the remipedes to drink their prey like milkshakes,” says Jenner.

Although venom is common in arthropods such as spiders, scorpions, centipedes and wasps, it has never before been seen in any of the 70,000 known crustaceans, a subgroup of arthropods that includes shrimp and crabs. Why it is so rare in this subgroup remains an open question.

Jenner suspects the reason is that the diet of crustaceans is much more varied than that of venomous predators. Marshall McCue, a comparative physiologist and venom expert at St Mary’s University in San Antonio, Texas, agrees. “As adept filter feeders and scavengers, crustaceans may not have been subjected to the same pressures as other arthropods to develop a predatory weapon-like venom,” he says.

Whether the venom has an effect on humans is unknown. “We often hear of cave divers dying under mysterious conditions,” says Jenner. “I wonder — are remipedes responsible?” If they are, perhaps the Maya were right after all.