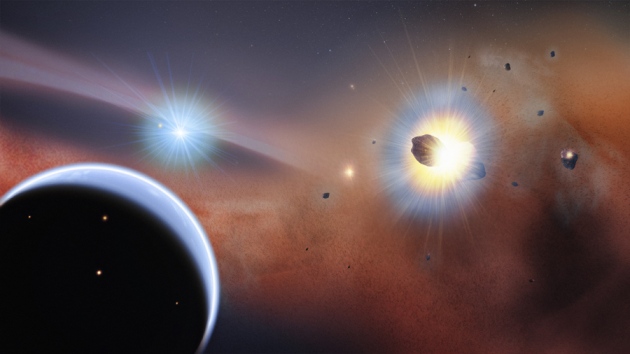 The planet β Pictoris b, at bottom left in this artist's impression spins faster than any planet in the Solar System.

Astronomers have for the first time managed to detect the rotation of an extrasolar planet, by analysing the way its atmosphere filters light. This technique could also provide clues about planet formation.

Ignas Snellen and his colleagues at Leiden University in the Netherlands report in Nature1 that a gaseous planet orbiting the star β Pictoris rotates at 25 kilometres per second at its equator — faster than any planet in the Solar System and about 50 times faster than Earth. A day on the planet, called β Pictoris b, lasts just over eight hours, even though the planet has a diameter more than 16 times that of Earth's and carries more than 3,000 times Earth's heft.

Exoplanets are typically hidden by the glare of their parent star and can only be discovered indirectly, but β Pictoris b was one of the first to be found by direct imaging2. This was possible because the massive planet, at around 20 million years of age, is relatively young and still warm, so it radiates strongly at infrared wavelengths. In addition, the star system is only about 20 parsecs (65 light years) from Earth — the star β Pictoris, part of the constellation Pictor in the southern sky, is visible to the naked eye — and the planet orbits a long way away from the star, about twice Jupiter’s distance from the Sun.

Those properties, as well as the composition of the star and the planet, enabled Snellen's team to home in on the infrared light from β Pictoris b, using the Very Large Telescope in the Atacama Desert of northern Chile. “It’s exciting to see another kind of insight into the properties of extrasolar planets,” says astronomer Thayne Currie of the University of Toronto.

The researchers calculated the planet's rotation rate by measuring how the infrared light is filtered by carbon monoxide in its atmosphere.

At any given time, half the planet is rotating towards an Earth-based observer, so for that part of the planet's light the spectrum shifts towards bluer (shorter) wavelengths; meanwhile the other half rotates away from the observer, and shifts the spectrum of its light towards redder (longer) wavelengths. No telescope has enough resolution to distinguish the two sides of a planet, and light from the two sides combines into essentially a single pixel. But the blueshift and redshift together broaden the carbon-monoxide absorption line in its spectrum. From the amount of broadening, the team determined that at its equator, β Pictoris b rotates about twice as fast as Jupiter.

As the planet continues to cool and shrink, it spin is expected to rev up, just as a spinning ice skater speeds up when she pulls her arms in. Snellen’s team estimates that over hundreds of millions of years, the planet will increase its spin to 40 kilometres a second, giving it a sunset every three hours.

The measurement of the planet's spin is consistent with a trend seen in the Solar System: with the exception of Mercury and Venus, more massive planets tend to rotate faster. This may be because the more massive the planet, the more material it accretes, which imparts additional spin, during their final stages of formation. But the notion that rocky planets such as Earth have the same relationship between mass and rotation as gas giants like β Pictoris b and Jupiter is a puzzle, says Snellen, since the two types of planet pack material on in different ways.

Determining spin is the necessary first step in constructing weather maps of the atmospheres of young, Jupiter-size exoplanets, says Ian Crossfield of the Max Planck Institute for Astronomy in Heidelberg, Germany. Changes in the absorption spectra of a planet as it rotates may indicate the presence of clouds in its atmosphere, he explains. Earlier this year, he and his colleagues used this method to make the first weather map of a rotating brown dwarf3. His upcoming paper in Astronomy & Astrophysics4 assesses the ability to make similar maps for Jupiter-size planets, which will require the next generation of giant, ground-based telescopes.